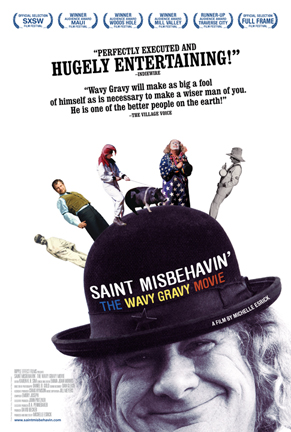 The Red Vic Movie House is located on 1727 Haight Street (map),between Cole and Shrader, just a block and a half east from Golden Gate Park.
SAINT MISBEHAVIN' - The Wavy Gravy Movie
Dir. Michelle Esrick US 2010
Saint Misbehavin’ reveals the true story of cultural phenomenon Wavy Gravy – a man whose commitment to making the world a better place has never wavered. We experience the impact one man can have and connect to the hope that each one of us can make a difference and have fun doing it! As the Village Voice declared, “Wavy Gravy will make as big a fool of himself as is necessary to make a wiser man of you.” Wavy Gravy is known in some circles as the MC of the Woodstock festival, a hippie icon, clown, and even a Ben & Jerry’s ice cream flavor. He is all those things, but in Saint Misbehavin’ we meet a true servant to humanity who carries his message through humor, compassion and a song he sings where ever he goes, called “basic human needs”. Saint Misbehavin’weaves together intimate verite footage, reflections from an array of cultural and counter-cultural peers, and a rich collection of never-before-seen archival footage to tell a story that is bigger than the man himself.

Wavy Gravy, director/producer Michelle Esrick and producer David Becker will be present opening night!! Check back for updates on other special guest appearances.

TICKET INFORMATION
Admission Prices
$6.00 Seniors & Children
$7.00 Bargain 2:00PM Shows
$9.00 Adults
$7.00 Every Tuesday night pay matinee price!
END_OF_DOCUMENT_TOKEN_TO_BE_REPLACED
Added to the calendar on Sun, Nov 14, 2010 9:18AM
Add Your Comments
Support Independent Media
We are 100% volunteer and depend on your participation to sustain our efforts!