§Gala Screening of “Mine: The Movie” to Raise Vital Funds for the Santa Cruz SPCA
by Sarah Eryavec (sarah [at] santacruzspca.org) Monday Nov 1st, 2010 2:10 PM 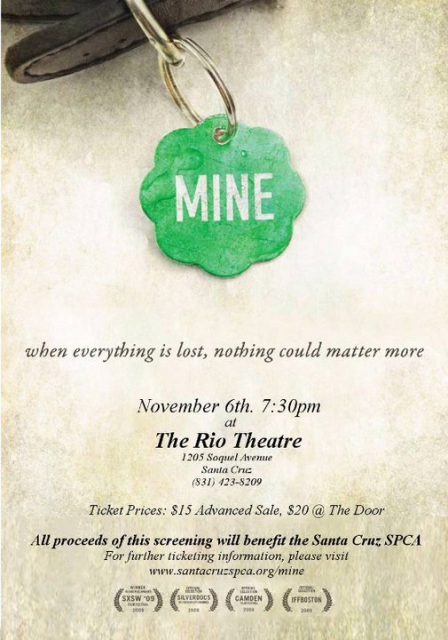 MINE is a documentary about the essential bond between humans and animals, set against the backdrop of one of the worst disasters in modern U.S. history.


In their biggest fundraiser of the year, the Santa Cruz SPCA in Conjunction with Film Movement are proud to present “Mine, The Movie” at the historic Rio Theatre, on Saturday, November 6th. This screening commemorates the fifth anniversary of the Hurricane Katrina disaster and the efforts of the Santa Cruz SPCA who, with the help of countless volunteers, medical professionals, foster homes, boarding facilities and donors, enacted one of the largest airlifts of the disaster in which over 150 animals were airlifted to safety. The airlifts were made possible by donor and renowned animal-lover Doris Day, who provided the SPCA with vital funds needed for the rescue and recuperation of the disaster-stricken animals.

Hailed as “absorbing,” “a must see,” “Oscar material” and “the best movie at SXSW,” MINE is a feature-length, independent documentary about the essential bond between humans and animals, set against the backdrop of one of the worst natural disasters in modern U.S. history: Hurricane Katrina. This gripping, character-driven story follows New Orleans residents as they attempt the daunting task of trying to reunite with their pets who have been adopted by families all over the country, and chronicles the custody battles that arise when two families love the same pet. Who determines the fate of the animals—and the people—involved? A compelling meditation on race, class and the power of compassion, MINE examines how we treat animals as an extension of how we view and treat each other.

Tickets are $15 advanced purchase, $20 at the door and are available online at http://www.santacruzspca.org/mine, at the Santa Cruz SPCA shelter located at 2685 Chanticleer Avenue or at the SPCA events booth. Doors open at 7pm with show time at 7:30pm.

http://www.minethemovie.com/
§Oops, the at the door ticket price is listed incorrectly.
by Sarah (sarah [at] santacruzspca.org) Monday Nov 1st, 2010 2:50 PM
It will be $20 at the door, not $25 as it states above.
Add Your Comments
Support Independent Media
We are 100% volunteer and depend on your participation to sustain our efforts!