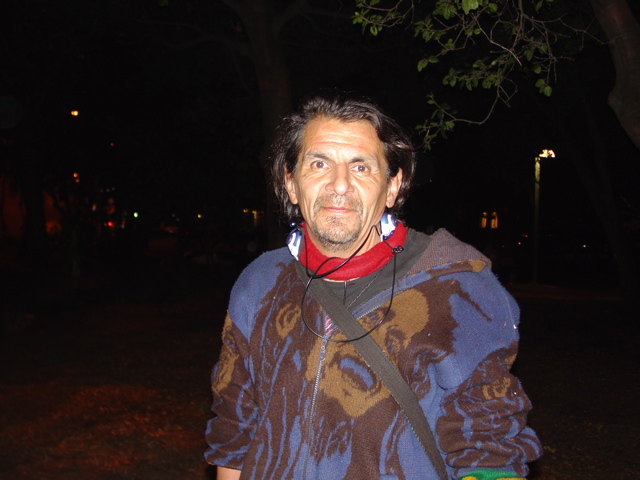 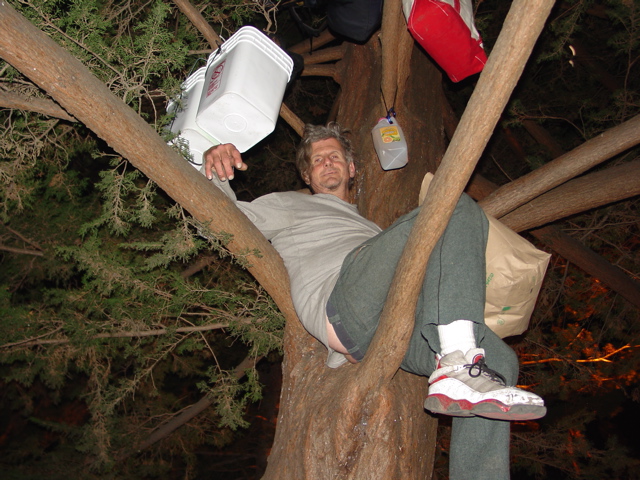 This is the treesitter interviewed in video above.
§Treesitter
by dave id Monday Nov 1st, 2010 12:50 AM 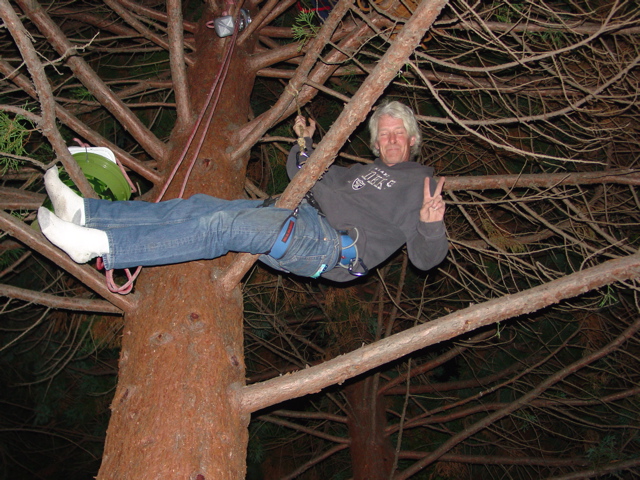 §Where's the Long Haul "milieu"?
by Craig Louis Stehr
(craigstehr [at] hushmail.com) Monday Nov 1st, 2010 9:54 AM
What's up with the Earth First!/American Indian Movement frontliners always being the ones to do the serious direct action? People's Park was filled Sunday with a crowd of stoned costumed scenesters celebrating Halloween, featuring the Long Haul Infoshop "milieu", the Purple Frog Crew, Act(i)on House Food Not Crack servers, the burned out acid heads making an appearance for the cameras on the People's Park stage, and the Telegraph Ave. lost tribe who haven't left for Hollywood yet for the winter. Why aren't the East Bay scenesters up in the trees, defending the park that they keep saying is so important to them?
Earth First!/American Indian Movement in Solidarity!
Add a Comment
§really?!?
by not a fan
Monday Nov 1st, 2010 3:52 PM
It must be nice to have nothing else to do that sit in a tree and complain about lack of resources for the homeless. Perhaps your energy would be better spent by finding a job and entering 2010 instead of trying to hold onto 1969.
Add a Comment
§PP/Muwekma Protest Right on!
by ghostchaser
Monday Nov 1st, 2010 4:20 PM
Whatever happened to that old adage referring to "I stood idly by until they came for me"? Well they are coming for you.
Add a Comment
§traditional academic discourse
by John (running deer) Redmond
Wednesday Nov 3rd, 2010 3:32 AM
the Ohlone being the original peoples indigenous to this area. 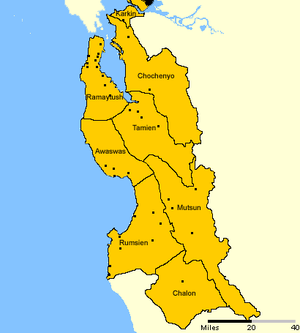 The Ohlone people, also known as the Costanoan, are a Native American people of the central California coast. When Spanish settlers arrived in the late 18th century, the Ohlone inhabited the area along the coast from San Francisco Bay through Monterey Bay to the lower Salinas Valley. At that time they spoke a variety of languages, the Ohlone languages, belonging to the Costanoan sub-family of the Utian language family,[1] which itself belongs to the proposed Penutian language phylum or stock. The term "Ohlone" has been used in place of "Costanoan" since the 1970s by some descendant groups and by most ethnographers, historians, and writers of popular literature. Before the Spanish came, the Ohlone lived in more than 50 distinct landholding groups, and did not view themselves as a distinct group. They survived by hunting, fishing, and gathering, in the typical ethnographic California pattern. Their culture included shamanism. From 1769 to 1833, Spanish policies, including the Spanish missions in California, brought tremendous upheaval, hardship, and decimation to the Ohlone people.

The Ohlone living today belong to one or another of a number of geographically distinct groups, most, but not all, in their original home territory. The Muwekma Ohlone Tribe has members from around the San Francisco Bay Area, and is composed of descendents of the Ohlones/Costanoans from the San Jose, Santa Clara, and San Francisco missions. The Ohlone/Costanoan Esselen Nation, consisting of descendants of intermarried Rumsen Costanoan and Esselen speakers of Mission San Carlos Borromeo, are centered at Monterey. The Amah-Mutsun Tribe are descendants of Mutsun Costanoan speakers of Mission San Juan Bautista, inland from Monterey Bay. Most members of another group of Rumsen language, descendants from Mission San Carlos, the Costanoan Rumsen Carmel Tribe Of Pomona/Chino, now live in southern California. These groups, and others with smaller memberships (see groups listed under the heading Present Day below) are separately petitioning the federal government for tribal recognition.
http://en.wikipedia.org/wiki/Ohlone_people
Add a Comment
§not the first time the red man has seen a fony map from the whitemen
by John (running deer) Redmond
Friday Nov 5th, 2010 2:49 PM
this is not the first time the red man has seen a phony map from the white man
it is common knowledge that the Ohlone are just pawns in the Indian casino
gambling scam that has brought much suffering to the Indian nations.

how appropriate that you mount your trees on the evening on October 31st. in our eyes you are "Pretend Indians" in servitude to the white man
the Ohlone have no honor
Add a Comment
§Response to John (running deer) Redmond.
by Konsider
Saturday Nov 6th, 2010 1:12 AM
Why do you want to continue to divide? You say the "Ohlone have no honor". I don't know what your gripe is. Nor do I care. Peoples Park has come under increasing attack. Yes, resistance is "appropriate".

It was not my decision to rename the park, but Native people need to work together on these matters, and much more. In particular, fighting oppression. Slander does not help anyone.
Add a Comment
§whos map
by Knowname
Monday Nov 8th, 2010 8:45 PM
Isnt that a whites mans map?

DONT TRUST IT!!!
Add a Comment
§awwwww sh@t
by shuttup whitey
Thursday Nov 11th, 2010 2:05 AM
zack attack running mouth is an idiot, and the UC will cut down the trees just to get him and his stoney cronies out.

he claims to lead 80,000 natives, and I've never met one, just an endless mill of silly crackers blinded by guilt.
they don't stick around long, but in the words of PT Barnum there's a sucker born every minute.

BTW Zacks living in the trees cause every radical space in the Bay has kicked him out. Hellarity, The Long Haul, The Berkeley Liberation Radio. He's banned for being racist sexist and homophobic. That crazy loon was even banned from the treesit 90% of the time. The funny thing is it doesn't take long for him to show it, jus most crackers think its some form of native vernacular, takes them a while to see that he means it.

This fool is Midas's Ass, everything he touch turn to shit. be warned.
Add a Comment
§zachary running wolf
by all about the TREEs
(philosopherstones [at] gmail.com) Thursday Nov 18th, 2010 3:06 PM
i love you tree-sitters! thank you for your courageous efforts for the tree beings that can't protect themselves. for the animals and people just trying to live natural lives without being horribly influenced by the corporate and university police nightmare.

i haven't talked to zachary running wolf for most of a year. i know that we need someone out there protecting rights.
but can a man be both oppressive and liberating at the same time.
maybe he has changed. i pray that the trees stay standing. that the park stays a park. that the university recognizes its methods are vile and vicious.
we got sexism and racism from both sides.
lets try to get our community back by open discussion, admissions of all of our foul human behavior.
not a one of us is without guilt, complicity in supporting this system. even activists, even people who buy nothing and try to escape it.
lets really think about how to make this place better. slinging mud is fun, but rarely productive.
zachary running wolf, have you apologized to that most wonderful lady who accompanied you at the berkeley tree-sit?
have you yet acknowledged your issues? don't worry, you're not the only one. i bet every person who tries to righteously shame you has horrible skeletons in their own closets. the important thing, my once and future friend: heal, grow, ans lose the self importance. you get things done, but your personality chases away the activists. people can change brother.
i will accept leadership if it is honest and free of egoistic feedback. i will accept leadership if the person doesn't take the leadership for hir personal fulfillment.
i pray that we can save ourselves from ourselves, and then save the planet.
none of this will work if we are all insane :)
Add a Comment
§they will always try to smear anyone who takes action
by seen it before
Friday Nov 19th, 2010 8:56 AM
Im not surprised to see lots of trolls coming up with vague and petty allegations against someone with the guts to do something. when one activist takes action against the system, all the fake activists (often involved with fundraising or otherwise scamming on the movement) have to denounce him to make themselves look good while doing nothing. of course they are egged on by cointelpro types that are running the system. the UC system makes the nuclear bombs of the u.s.a. govt, and nothing is more obscene than the elitists who teach and study there willfully ignoring this. let indybay edit out obviously slanderous smear attacks, trolls have other media outlets like fox news.
Add a Comment
§.....
by ..
Monday Nov 22nd, 2010 4:49 PM

how about the fact running wolf is openly anti-Semitic, claiming there is a global Jewish conspiracy.

The man is an embarrassment to us all. He is a reactionary and a wingnut. It is sad that so many people give him some sort of honorary position in the bay area when he is a obstacle to legitimate struggle.
Add a Comment
§ZRW the anti-jew pro-Palestine conspiracy...
by Steven
Wednesday Dec 22nd, 2010 3:19 PM
I'm ashamed to be part Hebrew when people forget the atrocities and just start pointing fingers at the darker colored people. Genocide and occupation is what Israel is all about, to say differently is in itself a discriminatory bias. It's what colonialism was about, and unless you live in a cave, you would know it's what transnationalism is about. It's easy to say pick on the Wolf because he is wild and in the urban environment, once Wolf is gone, once nature is gone then there are no Wolves. First they picked on the ZRWs, but I'm not ZRW so I didn't mind when they incarcerated him. Then they picked on all of the wishy washy proletariat liberals, but since I'm not a rich contented asshole I didn't mind. Then they went after me, boy was I surprised.

This kind of fence picketing is a real privilege and not very relevant for a cohesive political or rather anti-political movement. We need to learn to work with all of the people in the tribe, not just the ones that meet our economic criteria.

-Steve
Add a Comment
Support Independent Media
We are 100% volunteer and depend on your participation to sustain our efforts!