In Final Days Before Election, Get Out the Vote for NO on Stealth Anti-Environment Prop 26

by Ruth Robertson
People are angry about the lies and deception behind Proposition 26. So much so, in fact, that people who don't even necessarily call themselves environmentalists are joining rallies and phone banks to tell their fellow Californians that Proposition 26 must be defeated. 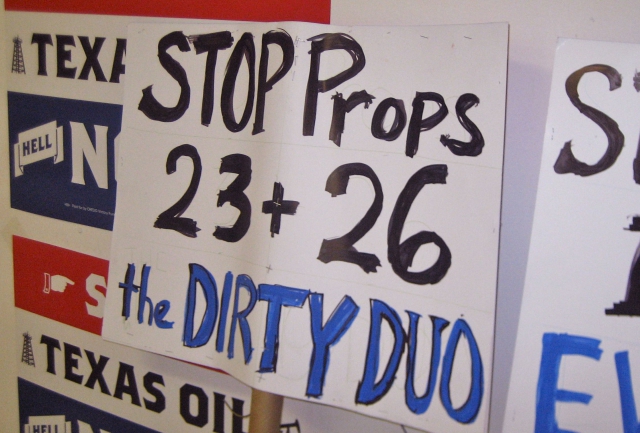 original image (2247x1523)
This coming weekend we'll be seeing protests in San Francisco and Palo Alto at Chevron gas stations. Chevron is backing 26, an initiative that is being called the "stealth anti-environmental proposition".

Until now Proposition 26 has attracted far less media attention than 23, another proposition that would seriously endanger California's landmark greenhouse emission standards. Prop 26 would require a two-third's vote to raise any fees on industry which fund state regulatory and enforcement agencies. "That's a big problem because getting a two-third's vote on anything is very difficult" said a field organizer for the Crush Prop 23 Campaign, Spencer Olson. While still keep Proposition 23 in their messaging, Olson and other activists are focusing increased attention on proposition 26.

At Crush Prop 23 Headquarters for San Francisco's Peninsula and South Bay, centrally located in Palo Alto, Olson and fellow organizer John Armstrong pointed to signs hand made by volunteers. The hastily painted signs refer to 23 and 26 as "Evil Twins" and "The Dirty Duo". They are propped against the wall next to professionally made "Say No to Texas Oil: Hell No on 23" placards.

Prop 26 would remove the funding of all air- and water-pollution programs, even oil-spill cleanup. "If 26 passes the cost of regulation will shift from the industry to taxpayers," Olson explained.

"We are working to crush Prop 23 because it kills California's landmark clean energy and air standards. At least it is pretty straightforward." Not so straightforward? Prop 26. "In effect what 26 turns out to be is a back-up plan for the oil industry…it interferes with the ability to implement AB 32, California's act that leads the nation in standards for greenhouse emissions," he added.

Proposition 26 is backed by industries that would benefit from its passage. The biggest is Chevron which has contributed $3.7 million to date. Philip Morris USA and Anheuser-Busch have each contributed in the $1 and 2 million range each.

"This is the first time that the general public has had an opportunity to vote on global warming legislation," said Armstrong. "California’s decision will set a powerful and crucial precedent on the matter, and will be central in paving the way for other states as well as on the national stage. As such, we absolutely must beat Props 23 and 26, and if possible, beat them resoundingly."

http://www.stoptexasoil.org
END_OF_DOCUMENT_TOKEN_TO_BE_REPLACED
Add Your Comments
Latest Comments
Listed below are the latest comments about this post.
These comments are submitted anonymously by website visitors.
TITLE
AUTHOR
DATE
PROTEST@Chevron Gas Station in San Francisco
This Saturday 10:30 am
Support Independent Media
We are 100% volunteer and depend on your participation to sustain our efforts!