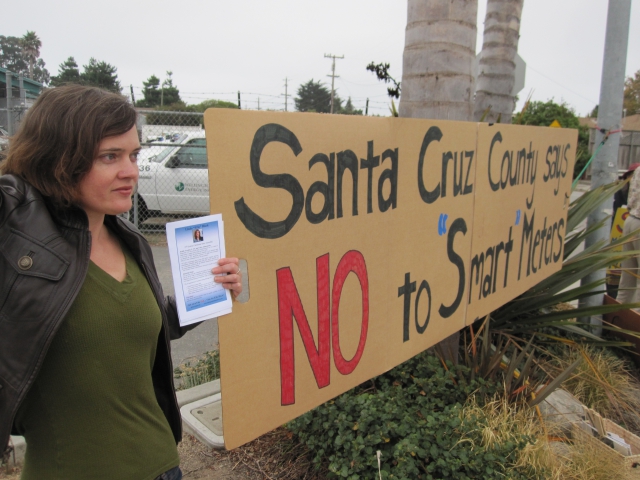 Rohnert Park- As North Bay residents prepare to protest continuing ‘smart’ meter installations, California’s utility watchdog agency has demanded public hearings on smart meter health and safety risks. On Wednesday, California’s Division of Ratepayer Advocates called upon the appointed members of the Public Utilities Commission to thoroughly investigate potentially lethal problems with PG&E’s ‘Smart’ Meter program. Saying that ‘there is clearly a high level of public concern’ about the health impacts of ‘smart’ meters, the DRA asserts that “…the Commission would be remiss in its duty to ensure ‘safe and reliable’ service if it did not solicit further evidence and perform an analysis.” (on health problems associated with their wireless signals, the ignition potential of meters in proximity to natural gas lines, and widely reported electronic interference.)

Fed up residents will gather at the gates of PG&E’s Rohnert Park installation yard tomorrow morning (Thursday, October 28) starting at 7:30am to demand that the CPUC call a halt to the so-called ‘smart’ meter program which they say is putting lives at risk. Many are alarmed and outraged by the forced installation of radiating ‘smart’ meters against the democratic will of residents and nearly two dozen local governments throughout the Greater Bay Area. The cities of Watsonville and Fairfax, and Santa Cruz County have even banned ‘smart’ meters under local law. Yet twelve thousand of the meters continue to be deployed daily. Despite the fact that the $2.2 billion program is being funded by ratepayers, and the new meters installed on people’s homes, there has been virtually no public consultation in advance of one of the largest rollouts of technology in history.

The meters will allow PG&E to turn off your power, turn down your thermostat, shut off your water heater, and control your appliances remotely. They will have access to minute by minute details of your private lives via wireless data and required appliance change outs. This is an unprecedented fundamental change in the way electricity is used and delivered.

Decades of research link radio frequency radiation to health impacts, including sleep problems and headaches and long term risk of cancer. Peer-reviewed scientific studies suggest the meters may have serious unintended health consequences, similar to cell phones, which have been linked to brain tumors. There has been no environmental safety study that proves Smart Meters are safe.

Details of Thursday’s emergency protest:
Where: 5500 Commerce Blvd. Rohnert Park CA
When: Thursday Oct 28th 7:30 am-9:00 am
Who: Alarmed residents angry about property, civil and health rights trespassed
Visuals: Protesters holding signs, crossing entrance to the Wellington driveway, workers arriving and being handed information and having discussions with outraged residents.

END_OF_DOCUMENT_TOKEN_TO_BE_REPLACED
Added to the calendar on Wed, Oct 27, 2010 12:50PM
Add Your Comments
Support Independent Media
We are 100% volunteer and depend on your participation to sustain our efforts!