Add an Event
Newswire
Calendar
Features
Home
Donate
From the Open-Publishing Calendar
From the Open-Publishing Newswire
Indybay Feature
Publish to Newswire
Add an Event
Related Categories: San Francisco | Arts + Action | Government & Elections | Health, Housing & Public Services | Police State & Prisons
SF Artists Seize Billboards to Defeat Prop L
by Jim Rawley (sitlieposse [at] gmail.com)
Tuesday Oct 26th, 2010 10:48 PM
SAN FRANCISCO, October 26, 2010 – With one week until November elections, a group of artists has liberated six San Francisco billboards and sixty bus shelter ads to defeat Proposition L, a ballot measure that would ban sitting on the sidewalk. The group, calling itself the Sit/Lie Posse, replaced ads throughout the city with handmade prints rendered in the style of corporate advertising. Confronting the backers of the proposition, the posse lavished attention on sites around City Hall, the Chronicle, the Haight-Ashbury district and many other neighborhoods. 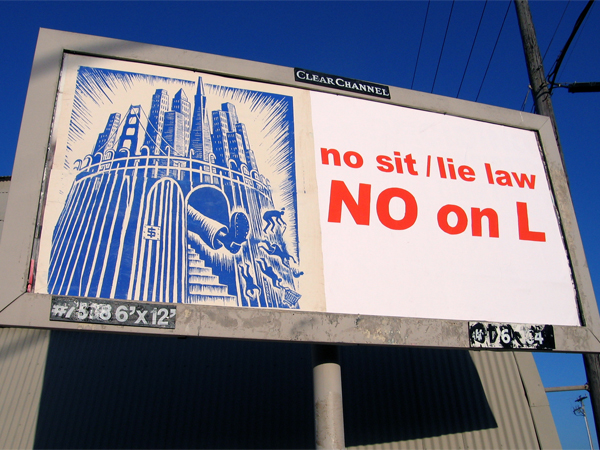 A spokesperson for the group, Jim Rawley, said, “Mayor Newsom put this issue on the ballot to boost conservative votes for the Board of Supervisors. We seized his strategy and reversed it, using our ads to turn out progressives in poor neighborhoods threatened by sit/lie.”

Mayor Gavin Newsom, Police Chief George Gascon and Chronicle columnist C.W. Nevius have been the driving force behind Prop L along with a small, but vocal, group of merchants. This alliance has centered on Haight Street where merchants seek to increase tourist traffic and ban homeless youth from the former epicenter of 1960s counter culture. The measure would make it a crime to sit or lie on any San Francisco sidewalk between 7am and 11pm, punishable by up to $500 in fines and a 30-day jail sentence.

Opponents criticize the law’s discriminatory focus and the expanded role of policing in public space. They claim that enforcement will fall only on the poor and that the police will conduct arrests without producing evidence or probable cause. Sit/lie critics also cite examples in Cincinnati, St. Petersburg, and Los Angeles where sit/lie laws were ruled unconstitutional.

“Prop L ignores due process and criminalizes people based on appearance,” according to Rawley. “If you look like you’re homeless, you can be arrested while tourists and the wealthy get a free pass with first-class treatment. It’s clearly discrimination when the law applies only to certain groups of people.”

The six billboards feature a massive boot kicking families, the homeless and seniors from the gated fortress of San Francisco with day-glo letters declaring: NO SIT/LIE LAW. The sixty bus shelters feature two designs. One refers to sci-fi movie posters with Mayor Newsom and his ally, the octopus/monster Gascon, grabbing children as they play on the sidewalk. The other evokes Civil Rights lunch counter sit-ins to highlight the danger of discriminatory laws.

“We seized corporate ads because Prop L is a battle over public space - a David and Goliath battle between poor people and downtown business,” said Rawley. “Symbolically we are asking: Who owns the city, who controls public space and what is the fate of San Francisco?” 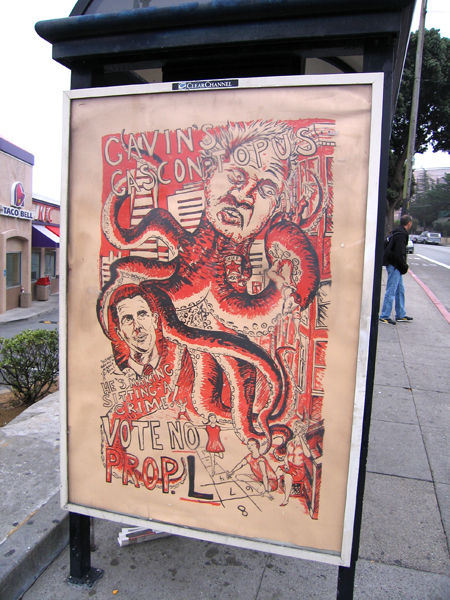 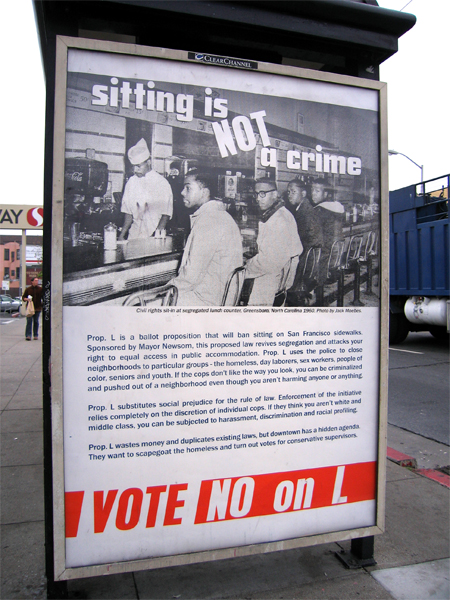