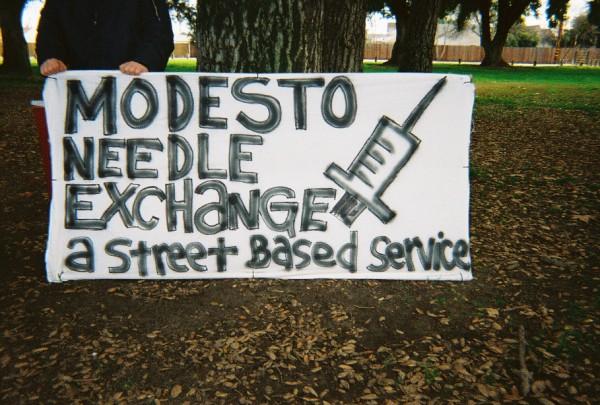 Nicknamed the "Mono Park Two," Kristy Tribuzio, 37, and Brian Robinson, 38, face up to a year in jail after undercover officers said they caught the two handing out clean syringes and collecting dirty ones in April 2009.

It was the pair's second attempt to persuade Stanislaus County Superior Court Judge Ricardo Córdova to let them use a medical necessity defense at their trial, set to begin in March.

Córdova said he was unconvinced that Tribuzio and Robinson didn't have any legal alternatives. They each are charged with possessing drug paraphernalia, a misdemeanor.

"(There) is a legislative solution to this issue," Córdova said, noting several bills that recently have come before state legislators.

Needle-exchange programs have long been controversial, pitting those who want to reduce a public health threat against those who fear encouraging drug use by supplying the tools.

In September 2008, the Stanislaus County Board of Supervisors nixed a proposal to legalize a needle exchange despite recommendations from a civil grand jury and county health professionals.

Defense attorney Rubén Villalobos said the defendants were fighting a health threat: the spread of HIV and hepatitis C in Stanislaus County among drug users who share needles or use dirty ones.

In California, there are more than 40 needle-exchange programs, but the Central Valley has just three, according to the state Department of Public Health.

Bee staff writer Merrill Balassone can be reached at mbalassone@modbee.com or 578-2337