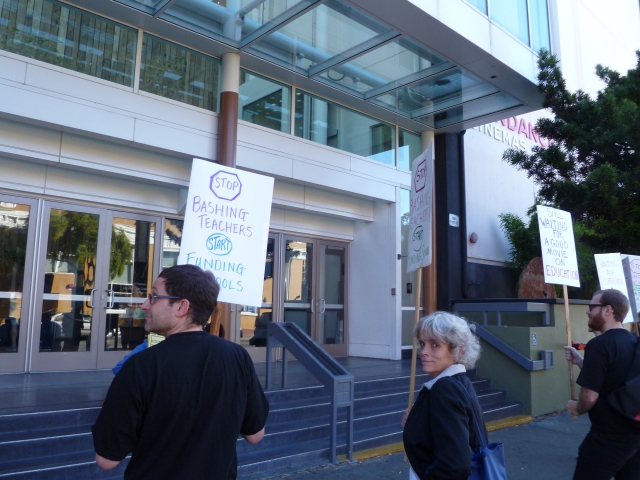 10/22 SF Labor TV Shows On San Francisco Cable TV Channel 29
Friday October 22, 2010
San Francisco Comcast Channel 29
Streamed on the web live at
http://accessf.org/guide/watch/
Channel 1
8:30 PM "LaborLine" Presents Jeff Blankfort on The "Real KPFA", Labor And Zionism
Jeff Blankfort On "The Real KPFA" Zionism & Labor Long term journalist and radio
host Jeff Blankfort discusses the history of the "Save KPFA" grouping formerly called
Concerned Listeners that are running in the KPFA 2010 elections. Some of the
supporters of "Save KPFA" were involved in refusing to fight the corporate take-over
of KPFA and Pacifica by Pat Scott. This was held on 9/24/2010 in San Francisco at a
meeting of KPFA Voices For Justice Radio
Also streamed at http://blip.tv/file/4175305

9:00 PM "Labor On The Job" Presents SF Teachers Protest "Waiting For Superman & "The Zone" From Turkey

The Zone (40 min.) (2010) - Turkey By Guliz Saglam, Feryal Saygiligil
Seven workers, all women... Four free trade zones in four different Turkish cities.
Surrounded by high walls, barbed wire fences, very much like a concentration camp.
This documentary covers the working conditions of women in the free trade zones, their
experiences, observations and their hopes for the future. The barbed wire fences not
only surround the zones but also accentuate the captivity of women, of women workers.
So much so that the borders of the zone evade us, inside and outside is indistinguishable.
To contact the Producer gulizsaglam [at] gmail.com


END_OF_DOCUMENT_TOKEN_TO_BE_REPLACED
Added to the calendar on Fri, Oct 22, 2010 12:08PM
Add Your Comments
Support Independent Media
We are 100% volunteer and depend on your participation to sustain our efforts!