by Voices For Justice Radio
The Voices For Justice Radio slate at KPFA is calling the KPFA election flawed and demanding that there be no certification of a manipulated election where the entrenched staff flagrantly violated the election rules by using the airwaves to push their agenda. The KFPA and Pacifica management have refused to hold them accountable for their actions and this lack of accountability must be end at KPFA and Pacifica 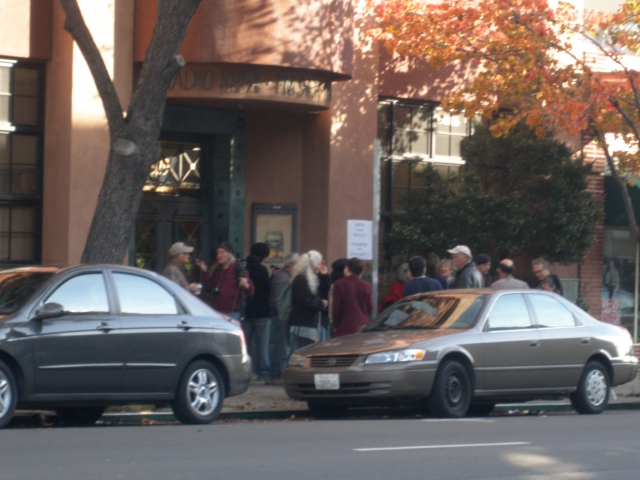 Even before ballots were mailed out in KPFA's 2010 Local Station Board
Elections, actions were set in motion rendering this a flawed process
from the start, wherein special entrenched and wealthier interests
would have greater control of the Elections results.


The first problem and issue during this year's 2010 KPFA Local Station
Board (LSB) Elections Cycle was the re-naming of the former grouping
"Concerned Listeners" to "Save KPFA." Despite the fact that in a
previous election cycle our grouping had been denied the use of the
name "KPFA Voices For Justice Radio," the Fair Election Committee
allowed the entrenched staff and their supporters the use of this name
because "KPFA" was in the name. This double standard clearly
benefited the entrenched staff and their supporters on the board.

Also, a ballot was prepared that included absolutely no information
about the candidates! Instead of sending out a brief listing of all
candidates' views and qualifications, Pacifica Executive Director (ED)
Arlene Engelhardt, with the support of one ICR Member on the Pacifica
National Board, opposed sending out information during the LSB
Elections because of concerns about "costs." This decision was made,
despite the fact that all involved were well aware that the "Save
KPFA" grouping (formerly "Concerned Listeners") would be sending out a
slick, expensive mailer alongside Listener-Members' ballots. This, of
course, meant "Save KPFA" would have an unfair advantage for their
candidates, since theirs would be the only information included with
voters' ballots.

As a result of this decision by management, Pacifica mailed no
information about the candidates with the ballots. After many
complaints, Engelhardt changed her position and the Pacifica National
Board ordered
candidate information be mailed out. But this was already nearly
midway through the Elections cycle and after almost 50% of the
Listener-Members had voted. Not surprisingly, this first wave of
ballots cast weighed in favour of the heavily funded grouping, which
printed and sent expensive mailers alongside the ballots.

Thirdly, the Elections Supervisors only allowed 30 second statements.
This made it extremely difficult to have a serious statement about the
important issues in this election played regularly on the airwaves.
When pressed about the initially scant candidate cart rotation, the
National Election Supervisor expressed staff resistance. This helps
explain why, particularly, morning programs, such as "Letters To
Washington," routinely ran out the clock playing multiple minutes of
theme music filler at the end of its broadcasts, instead of utilising
the opportunity to play multiple candidate carts to increase rotation
and voter awareness.

Not only was an entrenched faction at KPFA resistant to Pacifica's
democratic governance structure and Elections, certain programmers
were openly hostile to it. For example, Sasha Lilley, hosting
"Against The Grain," interviewed Iain Boal, who attacked the rights of
the Listener-Membership to vote for the Board of Directors and pitched
the idea of a petition to shred Pacifica's Bylaws and dismantle
democratically-elected Boards. Of course, Sasha Lilley, we recall, is
an endorser of the "Save KPFA" grouping.

Another partisan programmer, Doug Henwood, host of "Behind The News,"
had also attacked Pacifica's democratic governance structure in
conversation with Matthew Lasar in the run-up to the 2010 LSB
Elections. Henwood raised the question on-air of "invoking a slate of
candidates who [could] promise to commit institutional suicide and
change the governance structure." After all, said Henwood, these LSB
Elections featured "a lot of people who, uh, don't seem to know all
that much about how to raise money or run a radio station." For
Lasar's part, he feverishly urged people not to vote, so the
entrenched staff could return to power through self-appointed Boards
of the kind thousands of KPFA listeners marched to overturn following
the 1999 KPFA lock-out.

None of the defiant programmers were sanctioned by interim General
Manager Ahmad (iGM) Anderson to disparage Pacifica's democratic
governance structure, yet, basically, received a free pass to attack
the LSB Elections process.

This was just the beginning. With the 2010 LSB Elections process
still taking place in its final week, partisan staffers supporting the
"Save KPFA" grouping began to use the airwaves to make political
attacks on LSB and PNB Members, ICR, and its supporters. The partisan
staffers also urged listeners to go to http://www.kpfaworker.org. This was
done in violation of Pacifica's Bylaws forbidding use of the airwaves
by staffers to intervene politically in LSB Elections. Mitch
Jeserich, Sasha Lilley, C.S. Soong, Brian Edwards-Tiekert, Aimee
Allison, et al, initiated and sustained an unchecked disinformation
campaign in the last days of the Elections and beyond.

The iGM was publicly absent throughout the ordeal and allowed the
on-air disinformation campaign to go on for days before quietly
issuing an internal email to Paid Staff after the damage to the LSB
Elections process had been done. Worse, this blatant intervention in
the 2010 LSB Elections process was also participated in by Assistant
iGM Amelia Gonzalez, a partisan endorser of "Concerned Listeners."
Gonzalez was appointed as Assistant iGM by former iGM Lemlem Rijio
(another partisan supporter of "Concerned Listeners"). Again, iGM
Ahmad Anderson and ED Arlene Engelhardt, refused to take disciplinary
action. This recent failure to manage staff abuse of the airwaves to
influence KPFA's Elections and, thereby, its governance, is not a new
development at KPFA and reveals serious systemic problems regarding
competence and management accountability.

The serious malfeasance in this year's 2010 KPFA LSB Elections cycle
has given Listener-Members a flawed and tainted election. We call on
the National Election Supervisor and the Local Election Supervisor not
to certify the election results before publishing a public LSB Elections
Report, including a Fair Campaign Provisions Report, and as necessary,
the ordering of disciplinary action, disqualifications of Candidates whom
violated Fair Campaign Provisions, and/or new elections.

The entrenched staff that have created this fiasco and, potentially,
the cost of a new election at KPFA need, again, to be held accountable
by the management of KPFA and Pacifica. Failure to do so will only
exacerbate the serious problems of KPFA and the Pacifica Foundation.


Voices For Justice Radio http://www.voicesforjusticeradio.org
END_OF_DOCUMENT_TOKEN_TO_BE_REPLACED
Add Your Comments
Latest Comments
Listed below are the latest comments about this post.
These comments are submitted anonymously by website visitors.
TITLE
AUTHOR
DATE
Where were the rest of the 20,000?
?
working on KPFA
Konsider
Stock Photo from December 2009?
Brian S
Support Independent Media
We are 100% volunteer and depend on your participation to sustain our efforts!