ILWU Local 10 longshore workers will close all bay area ports in protest of the murder of Oscar Grant with the demand "Justice for Oscar Grant! Jail Killer Cops! on October 23, 2010 at 12:00 at Oakland Frank Ogawa Plaza.
http://www.indybay.org/oscargrant
§Call to Action: This Saturday's Rally in Support of Justice for Oscar Grant
by --repost Friday Oct 22nd, 2010 12:18 PM 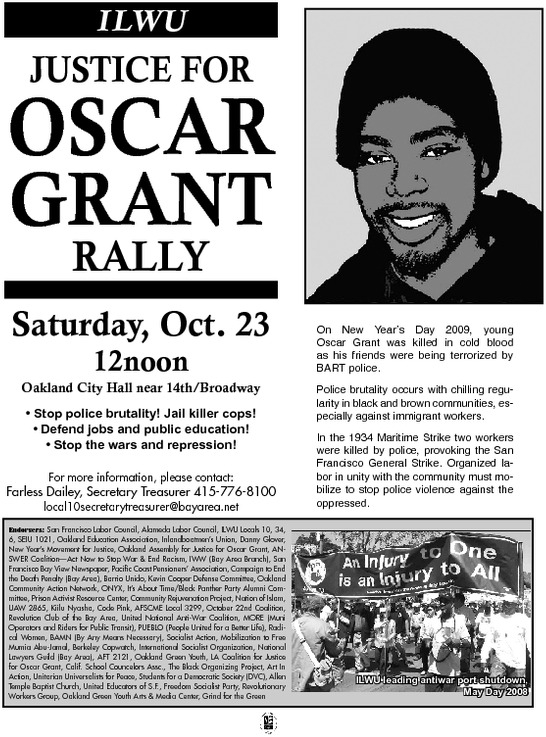 Download PDF (335.7KB)
A massive rally in support of Justice for Oscar Grant is scheduled for this Saturday, October 23, 2010, from noon to 4:00pm at Oakland City Hall, Frank Ogawa Plaza. Initiated by the International Longshore and Warehouse Union (ILWU), all Bay Area ports will be shut down that day as union port workers join in the rally which will bring together labor unions, community organizations, high school and college students, the faith-based community and the general public in a call for justice.

Support justice for Oscar Grant. Call for Judge Robert Perry at (213) 974-5394 to tell him to give Johannes Mehserle the maximum sentence for killing Grant. Join us at the rally.

California Association for Religious Values and Issues in Counseling (CARVIC)

Grind for the Green

PUEBLO-People United for a Better Life

Revolution Club of the Bay Area

Students for a Democratic Society (DVC)

United National Anti-War Coalition
Add Your Comments
Support Independent Media
We are 100% volunteer and depend on your participation to sustain our efforts!