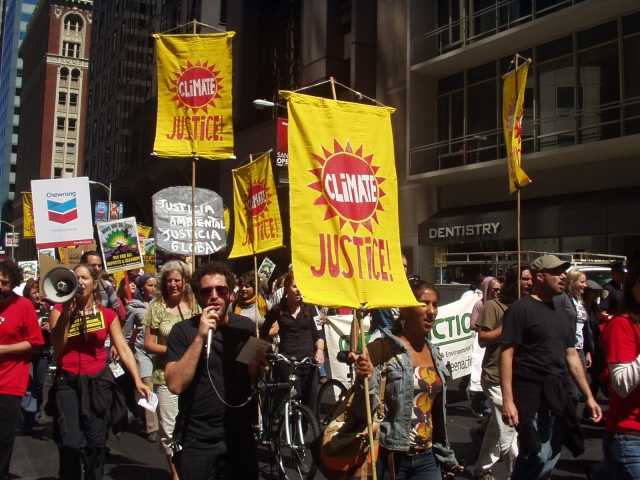 Today Chevron came out with a radical quote as part of their new ad campaign and people suffering from pollution created by Chevron's refinery in Richmond, California agree.

From the ad seen at link below:
"For decades, oil companies like ours have worked in disadvantaged areas, influencing policy in order to do there what we can't do at home. It's time this changed. People in Ecuador, Nigeria, the Gulf of Mexico, Richmond, and elsewhere have a right to a clean and healthy environment too."

Climate activists in the San Francisco Bay Area agree! Chevron need to clean up the communities it has destroyed and we need a real windfall tax on big oil. Meanwhile, Chevron and the other big oil companies say they need to hoard profit during good days to use on rainy ones. They claim they are investing it in a way that will ultimately reduce gas prices.

Wait, before we agree too quickly with Chevron's new "We Agree" campaign, maybe we can look at nationalizing big oil.

And maybe before we "agree" too quickly we should look more closely at Chevron's website, in which they claim plaintiffs' lawyers' misconduct and a "strategy of fraud" in the making of the documentary Crude, which exposes Chevron's unethical business practices in Ecuador. Chevron is battling against a $27 billion lawsuit in Ecuador dating back 18 years because Texaco, which Chevron bought, caused significant environmental damage in the Amazon through faulty drilling techniques.

Thank you, creative climate justice activists, for creating the look alike ad in the link here that makes mockery of Chevron's new campaign. Shame on Chevron for trying to improve their rightfully tarnished image, using their own "strategy of fraud".
http://www.chevron-weagree.com/
Add Your Comments
Support Independent Media
We are 100% volunteer and depend on your participation to sustain our efforts!