The Demarest Factor: US Military Mapping of Indigenous Communities in Oaxaca, Mexico 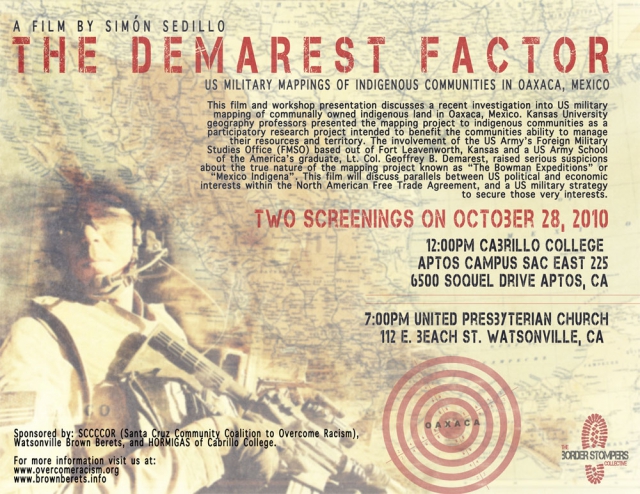 The Demarest Factor: US Military Mapping of Indigenous Communities in Oaxaca, Mexico

This film and workshop presentation discusses a recent investigation into US military mapping of communally owned indigenous land in Oaxaca, Mexico. Kansas University geography professors presented the mapping project to indigenous communities as a participatory research project intended to benefit the communities ability to manage ...their resources and territory. The involvement of the US Army’s Foreign Military Studies Office (FMSO) based out of Fort Leavenworth, Kansas and a US Army School of the America’s graduate, Lt. Col. Geoffrey B. Demarest, raised serious suspicions about the true nature of the mapping project known as “The Bowman Expeditions” or “Mexico Indigena”. This film will discuss parallels between US political and economic interests within the North American Free Trade Agreement, and a US military strategy to secure those very interests.

SIMON SEDILLO is a community rights defense organizer and film maker. He has spent the last 8 years documenting, producing and teaching community based video documentation in Mexico and the US. Through lectures, workshops, and short films, Sedillo breaks down the effects of neoliberalism, the North American Free Trade Agreement, and militarism on indigenous communities, immigrant communities, and communities of color in the US and Mexico. Through collaborative media projects, Sedillo’s work has contributed to a growing network of communities whose primary objective is to share, teach, and learn from one another, about community based media production and the collective construction of horizontal networks of community rights defense.

For more information visit us at:
http://www.overcomeracism.org
http://www.brownberets.info
END_OF_DOCUMENT_TOKEN_TO_BE_REPLACED
Added to the calendar on Sun, Oct 17, 2010 11:36PM
Add Your Comments
Support Independent Media
We are 100% volunteer and depend on your participation to sustain our efforts!