Add an Event
Newswire
Calendar
Features
Home
Donate
From the Open-Publishing Calendar
From the Open-Publishing Newswire
Indybay Feature
Related Categories: California | Santa Cruz Indymedia | Drug War | Environment & Forest Defense | Government & Elections | Health, Housing & Public Services | Police State & Prisons
VALERIE CORRAL will VOTE YES on Prop. 19 despite its flaws!!!
by via Cannabis Warrior
Thursday Oct 14th, 2010 9:15 PM
YAY! I knew that this wonderful voice for cannabis freedom would come around. Now if we can only talk Dennis into reluctantly getting on board…..Such powerful voices in this movement. THANK YOU, VALERIE. You are one of the true heroes and a person that knows what is BEST for cannabis users EVERYWHERE! I am honored to be standing next to you in the battle for cannabis freedom! And for the record I agree with many of your concerns and agree that despite its flaws voting NO is NOT AN OPTION. We must move forward, as complacency is a KILLER! Mad love and respect to WAMM, Val, and the rest of the people who are are big enough people to see the writing on the wall and VOTE YES even though the initiative is not ideal…THANKS! 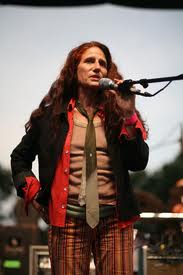 A few days ago I did an interview with the AP. I hoped to make a distinction between what I see as the negative aspects of the corporatization of marijuana and the dilatory unraveling of prohibition…. Unfortunately AP just wanted to see pretty pictures of pot. Perhaps in the presence of such majesty one looses sight of the magnitude of what is important, of how impossible it really is to look at this plant and see only the flowers for the leaves. I simply can’t separate all its parts from the whole. That wouldn’t make me a very attractive candidate for work in the pharmaceutical industry.

Yet, no matter how I roll my profound disappointment in the direction that P.19 leads and all the small-minded name-calling and disappointing infighting that has ensued and is splitting our movement, I just can’t bring myself to vote against it. Why? Because I can’t support prohibition. My pals are right… a vote against the corporations still doesn’t outweigh the direct harm caused by a lifetime of prohibition. Far too many people suffer.

I do know we could have made a better law. If you are in possession of a medical marijuana recommendation, if you have a clandestine garden, if you own a dispensary, grow for some patients, or if you made millions off medical and can afford to fund the corporatization movement, you have the grassroots to thank and Dennis Peron (the Grandfather of medical marijuana) and Dr. Lester Grinspoon for his courage to reintroduce marihuana into the medical profession.. We could have written a better law, a proposition who’s intention was to benefit… benefit human beings, the planet, the plant itself.

Still, while poverty runs through the gutters of our nation, of Mexico, of the Americas, the far and middle East and of every country that we share this planet with, as it pushes our children from school yards to the bastilles, I have to ask… how has the corporation helped? Some of them assisted in creating prohibition of marijuana in the first place, they have made people into a commodity to fill jails and prisons, they are poverty’s benefactors. They have not understood the disparity between profit and benefit. There is no marijuana subsidy written into P.19, but there are mandatory minimums….. Diminish the cartels, end prohibition… these are intricate issues far too Daedalean to brand with sweeping statements. It’s convoluted. It’s complex…. But it is also the beginning of the end of the prohibition of this miraculous and exquisite plant. Rest assured, even if it isn’t immediate… as it happens in California, so goes the nation.

It is in great protest of the corporation that I say, go ahead, vote Yes on P.19… because it is bigger than your personal garden and your personal freedom… it is our freedom. It is the first step in extricating marijuana from a lifetime of prejudice and deception. Hey, and maybe unlike that of the corporate good ol’ gang, it may free your mind.”

Valerie Corral
Santa Cruz, California
October 13, 2010
http://cannabiswarrior.com/2010/10/14/vale...
Add Your Comments
LATEST COMMENTS ABOUT THIS ARTICLE
Listed below are the latest comments about this post.
These comments are submitted anonymously by website visitors.