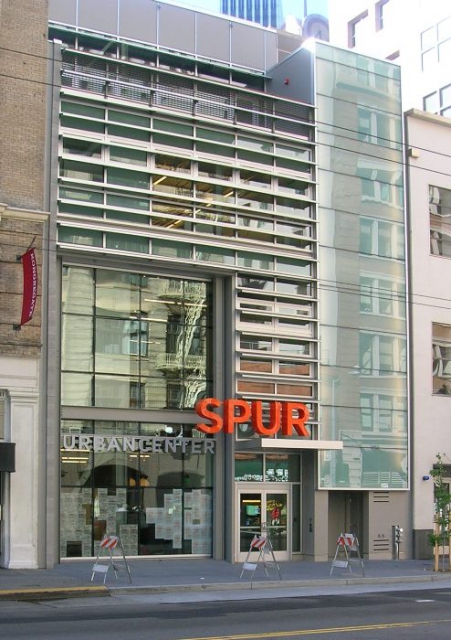 Join SF Muni drivers, BA Transit Workers, defenders of public services and community activists to protest the union busting role of San Francisco SPUR. This so called "good planning and government through research, analysis, public education" organization is helping to launch major attacks on the all public workers in San Francisco. It supported the racist campaign by Democratic Mayor Newsom now a candidate for Lt. Governor to blame Muni drivers for increasing fares on seniors, students and the disabled. This is the tactic of union busters who want to attack public services and to pit workers against each other while the the owners of San Francisco and the US increase their profits. Newsom threatened to layoff 17,000 city workers in order to force concessions and unfortunately the union tops in San Francisco not only went along but applauded "concession bargaining".
This in one of the wealthiest cities in the US. At the same time that SPUR is attacking San Francisco public workers. it is receiving hundreds of thousands
of dollars from the Federal Government courtesy of millionaire and pro-NAFTA supporter House Speaker Nancy Pelosi and her personal SPUR earmarks. SPUR has organized a campaign against SF transit workers by supporting Sean Elsbernd and Proposition G and also anti-city worker proposition B which attack pensions and healthcare of all City and School District workers.
The millionaires and billionaires who really run SPUR and the speculators and developers who control San Francisco want public workers to pay for the economic crisis while they sell off public properties and privatize Golden Gate Park, UC Laguna Extension and other public resources to benefit themselves.

It is time to say enough is enough.
Stop Government Funding of Union Busting SPUR
All Union Officials Off The SPUR Board
Make the Millionaires and Billionaires Pay For the Crisis They Caused
SPUR Is Spurious

"Does B stand for billionaire?" SF Labor Council ED Paulson Resigns From Union Busting SPUR After It Supports Anti-Labor Proposition B "Associating the Labor Council with SPUR has been one of the largest mistakes I could have made."
http://www.sfgate.com/cgi-bin/article.cgi?f=/c/a/2010/10/06/BA741FON4K.DTL
Does B stand for billionaire? Campaign finance reports show the team behind Proposition B on the Nov. 2 ballot, which would require city employees to pay more for their pensions and health care plans, has collected $720,367 from some of the city's wealthiest residents.

Venture capitalist and billionaire Michael Moritz paid $245,000 to fund the signature drive to qualify the measure for the ballot, and a number of venture capitalists, attorneys and businessmen have also opened their checkbooks.

Why would the former L.A. mayor care about Prop. B? "That's a good question," quipped Nathan Ballard, spokesman for the No on B side. "Maybe he bumped into one of the other backers at the Rolls-Royce dealership."

To be fair, his team isn't exactly shopping at the used car lot. Ballard said upcoming campaign finance forms will show $617,500 raised from labor unions including police and fire - and they're expected to raise as much as $3 million before the election.

Public Defender Jeff Adachi, who came up with Prop. B, admitted he scrolled down the Forbes list and e-mailed anybody living in San Francisco to ask them to support the measure. Many of them said no for fear of being harassed and picketed by the unions, he said.

Adachi scored a major coup Monday with the endorsement of the San Francisco Planning and Urban Research Association. Some SPUR members resigned over the endorsement, including the entire Municipal Executives Association and Tim Paulson, executive director of the San Francisco Labor Council, who told SPUR's president in a resignation letter, "Associating the Labor Council with SPUR has been one of the largest mistakes I could have made."

Union Busting SPUR Operation In SF Calls For TWU 250 A Muni Workers To Give Up Conditions & Wages
http://www.sfbg.com/2010/02/23/open-letter-transit-workers-union

Sign The Muni Petition
Through all of the Muni reform efforts SPUR has led over the years-authoring policy reports, running
ballot campaigns and advocating for funding increases-there is one problem we have never resolved:
amending work rules. Currently, Muni drivers' wages and benefits are set by a salary forumula in the City
Charter, meaning that management has never been able to negotiate changes to work rules. We can change
this now. SPUR is proud to be co-leading the Fix Muni Now campaign: we are collecting 43,000 signatures
to qualify a Charter amendment for the November ballot.
For More Information, see FixMuniNow.com, where you can read Gabriel Metcalf's open leter in the San Francisco
Bay Guardian, op-ed letter in the San Francisco Business Times, and learn more about the campaign and volunteer
opportunities.


[Image: Colleen McHugh]
In this new SPUR tour series, see your neighborhood through the eyes of your district supervisor! Join Supervisor Sean Elsbernd on this walking tour of West Portal. Supervisor Elsbernd will take us to some of his favorite spots, but with only one hour, we won’t see it all. Grab your walking shoes!
http://www.spur.org/about/board

When it began in April, Supervisor Sean Elsbernd's quest to get enough signatures to put a charter amendment on the November ballot had its doubters.

Elsbernd was one of them.

The proposed amendment, which would delete the guarantee that San Francisco Muni operators be the second-highest-paid transit drivers in the country, has stirred up a lot of passion. But gathering 47,000 authenticated signatures in about three months is not easy.

"Sure I had my doubts," Elsbernd said. "There hasn't been a successful signature drive for a charter amendment at the grassroots level in a couple of decades."

Today Elsbernd is confident, even if he realistically needs 70,000 signers to account for duplicates and invalid signatures. Insiders think he'll cross the finish line on July 6 with signatures to spare.

Although it seems logical that Muni drivers should have their contract negotiated like all other city workers, taking on the unions can be politically dangerous.

He also gets a chance to trash-talk his colleagues on the Board of Supervisors, who were not supportive.

"If we're successful, it sends a message that the Board of Supervisors can ignore an issue but the people will take it up," Elsbernd said. "It will show that the board was woefully out of touch."
http://www.sfgate.com/cgi-bin/article.cgi?...
Added to the calendar on Mon, Oct 11, 2010 7:19AM
§Newsom's Union Busting Racist Buddy Elsbernd
by United Public Workers For Action 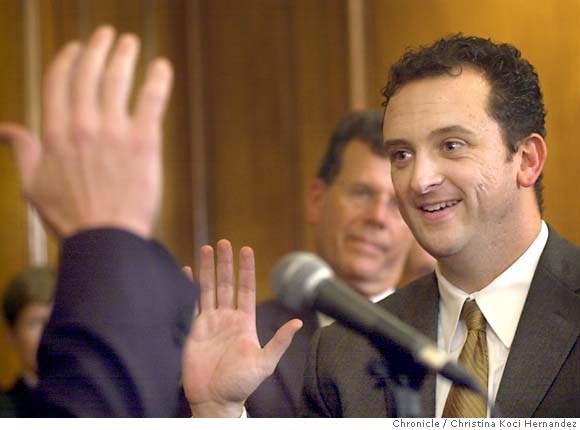 Pro-privatization Mayor Newsom signs in his pal and cohort Sean Elsbernd into the Board Of Supervisors. Government funded SPUR is helping both in their anti-labor and anti-public worker agenda.
Add Your Comments
Support Independent Media
We are 100% volunteer and depend on your participation to sustain our efforts!