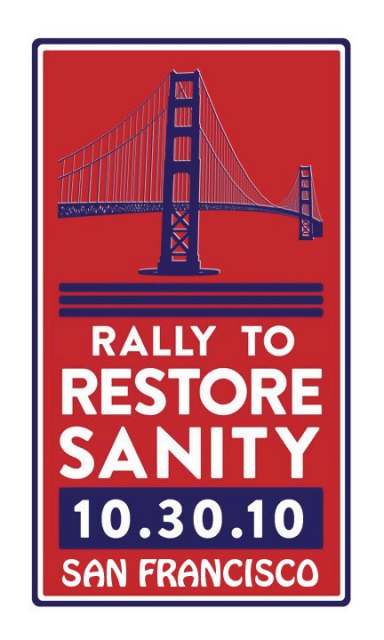 “Because you can’t go to the real thing, but you still care.”

Are you one of the thousands of sane and busy Bay Areans who supports the message behind Jon Stewart’s Rally to Restore Sanity, but just can’t afford the transportation, lodging or time to attend the event in Washington D.C? Well, fear no more (Although fearmongers are welcome to attend our Stephen Colbert-inspired March to Keep Fear Alive)! Due to popular demand, the City by the Bay will be hosting its own Rally to Restore Sanity at the Civic Center Plaza on Saturday, October 30, 2010, from 9 a.m. to 3 p.m. This event is meant to inspire citizens who have been on the sidelines to have a more active voice in current and future political discussions. We are a non-partisan, family friendly event. All political views are welcome - as long as you refrain from any name calling and remember that the spirit of the event is Respectful Disagreement.

In the words of Jon Stewart, “Ours is a rally for the people who’ve been too busy to go to rallies, who actually have lives and families and jobs (or are looking for jobs) — not so much the Silent Majority as the Busy Majority. If we had to sum up the political view of our participants in a single sentence… we couldn’t. That’s sort of the point.” Line-up includes guest speakers, comedy, poetry, a dance flash mob, a costume contest, and performances by the San Francisco Mime Troupe.

As Jon Stewart suggests, “We’re looking for the people who think shouting is annoying, counterproductive, and terrible for your throat; who feel that the loudest voices shouldn’t be the only ones that get heard; and who believe that the only time it’s appropriate to draw a Hitler mustache on someone is when that person is actually Hitler. Or Charlie Chaplin in certain roles.” The activities will include games and children’s costume contests, so come in costume and invite the whole family! Bring a sign and a smile, lawn chair and some hot cocoa, and a costume!

http://www.wdfamarketing.com/Rally/
Add a Comment
Support Independent Media
We are 100% volunteer and depend on your participation to sustain our efforts!