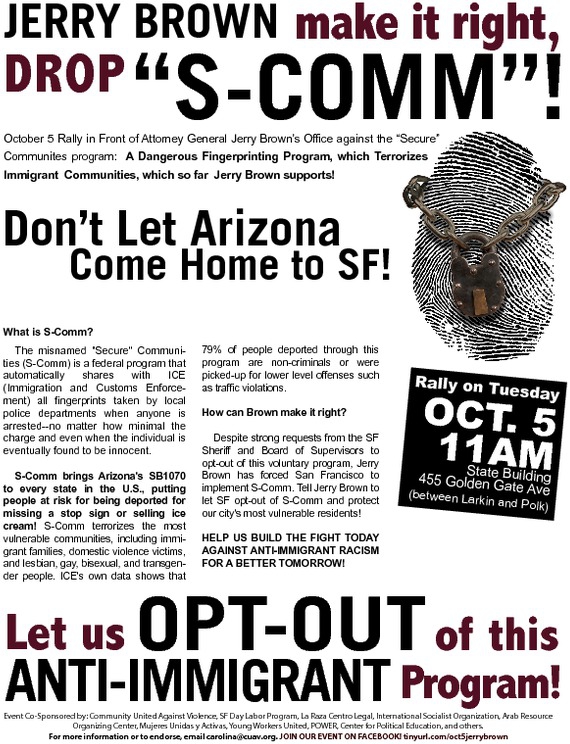 Rally in Front of Attorney General Jerry Brown’s Office against the “Secure” Communites program: A Dangerous Fingerprinting Program, which Terrorizes Immigrant Communities, that Jerry Brown has supported so far!

The misnamed "Secure" Communities (S-Comm) is a federal program that automatically shares with ICE (Immigration and Customs Enforcement) all fingerprints taken by local police departments when anyone is arrested--no matter how minimal the charge and even when the individual is eventually found to be innocent.

S-Comm brings Arizona's SB1070 to every state in the U.S., putting people at risk for being deported for missing a stop sign or selling ice cream! S-Comm terrorizes the most vulnerable communities, including immigrant families, domestic violence victims, and lesbian, gay, bisexual, and transgender people. ICE's own data shows that 79% of people deported through this program are non-criminals or were picked-up for lower level offenses such as traffic violations.

How Can Brown Make it Right?

Despite strong requests from the SF Sheriff and Board of Supervisors to opt-out of this voluntary program, Jerry Brown has forced San Francisco to implement S-Comm. Tell Jerry Brown to let SF opt-out of S-Comm and protect our city's most vulnerable residents!

HELP US BUILD THE FIGHT TODAY AGAINST ANTI-IMMIGRANT RACISM FOR A BETTER TOMORROW!

Added to the calendar on Mon, Oct 4, 2010 10:49PM
Add Your Comments
Support Independent Media
We are 100% volunteer and depend on your participation to sustain our efforts!