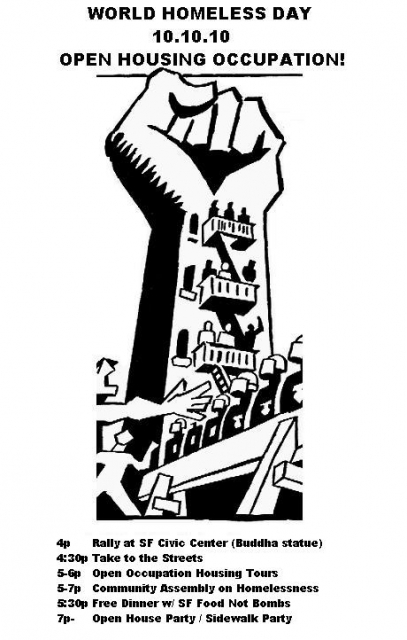 October 10, San Francisco - Creative Housing Liberation is taking direct action on 10/10/10, the first annual World Homeless Day, by staging a public "open occupation" of vacant residential housing downtown. Hundreds of homeless individuals, community leaders, activists, immigrant community members, children, families, social workers, squatters, students, educators, and San Franciscans of all stripes, are gathering this Sunday at 4 PM in Civic Center Plaza to rally for the right to housing before engaging in creative audacity, by marching directly into vacant property and reclaiming it from its state of waste.

Three previous housing rights demonstrations this year in San Francisco have included lively housing takeovers, and this Sunday's action promises to be an exciting and educational culmination. A community assembly addressing homelessness and the housing crisis will take place on the sidewalk outside of the occupation. Expect to be challenged by such questions as:
~ How can approximately 15,000 San Franciscans be homeless while, according to 2009 Census data, over 36,000 housing units remain vacant?
~ What are the systemic causes of the estimated 6 million homeless individuals and 19 million vacant homes in the U.S.?
~ How do banking interests and U.S. imperialism perpetuate homelessness not only at home but also worldwide?
~ How are banking interests complicit in causing homelessness in the U.S. and worldwide?
~ Are we as a society going to treat vacant housing units as acceptable waste?

By acting in solidarity with people in dozens of cities across the U.S. and over 50 other countries on World Homeless Day, we honor the one billion individuals, families, and children who are currently homeless. The homelessness created by U.S. economic policies in Brazil, South Africa, Haiti, and the Middle East are equally devastating at home: While San Francisco homeless individuals and allied activists are struggling to establish a shelter for LGBT homeless youth, conservative forces led by the country's largest banks have sunk $200,000--roughly 125% of the budget for that entire youth shelter--into a campaign to make innocent sitting by unsheltered homeless people a criminal act. Sunday's action will challenge our City's policy-makers to be similarly audaciously creative in seeking real solutions to homelessness.

Who knows, perhaps you will be inspired to join in challenging the status quo by engaging in Creative Housing Liberation yourself, on this historic day.