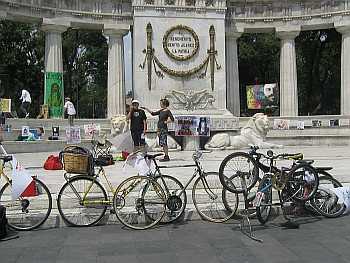 On Tuesday, September 21, around 150 people gathered at the Hemiciclo a Juárez in Mexico City to demand life and freedom for Mumia Abu-Jamal, recognized internationally as a political prisoner. People expressed their support for him in spoken messages, song, dance and graphic art. The event was energized by the arrival of a large group of bicyclists riding in defense of the air we breathe and of all political prisoners.

A number of Mexico’s ex political prisoners were present, including Jacobo Silva Nogales, Gloria Arenas, Mariana Selvas and Edith Rosales, along with the family of Victor Herrera Govea, who has been locked up for an entire year for marching against government repression.

Among those who participated in the event were human rights observers from the Collective against Torture and Impunity (CCTI), along with individuals and collectives from the Other Campaign, Anarchist Black Cross, student groups, and collectives from the Ché Guevara Auditorium –especially the kitchen, which contributed a delicious vegetarian ceviche. Among the supportive free and independent media collectives were Cronopios, Ke Huelga Radio, CML, Regeneración Radio, Radio Okupa, Noticias de la Rebelión and Radio Zapote.

A representative of Amig@s de Mumia de México stated that it’s clear that the government of the United States is not satisfied with the recent Supreme Court decisions leading to the death of Mumia Abu-Jamal; it’s necessary to build up public animosity against him in order to justify his execution. It’s clear from the trailers that the new documentary Barrel of a Gun (El cañón del fusil) by the supposedly independent filmmaker Tigre Hill, with backing from the Fraternal Order of Police, is nothing but an exercise in defamation. It both a personal attack against Mumia, and an attack against groups that have been important in his life history.

The comrade said: “We’re here today to say NO to the criminalization of Mumia Abu-Jamal and of his struggle. Just as Mumia writes in defense of the efforts of the Black Panthers and the MOVE organization to make necessary and positive changes in the world, we…recognize these efforts as valuable experiences. “The Mumia Abu-Jamal that we know through his weekly essays and the six books he’s written from death row…is a brave and righteous man committed to social change. He’s a writer who knows how to put any one of today’s events in a historical context and untangle all that we’re going through. We especially appreciate his solidarity with the struggles here in Mexico and in the world”.

During the event, different people read Mumia’s essays out loud, including one on the death penalty as a modern form of lynching and others on BP, Arizona, the MOVE organization, and the nature of the State.

People also read fragments of a report written by Michael Schiffman and Anton Reiner, published in Abu-Jamal News, of their recent visit with Mumia in which they were accompanied by Linn Washington. They talk about his contagious energy, clear thinking and love of life, even in the hell he lives in, surrounded by steel and razor wire with the lights always on, no physical contact with friends and loved ones, no fresh fruits and vegetables in a small cell with no color. He never leaves his cell without being chained hand and foot. Now he doesn’t even have a typewriter; once again, he must write everything seated on his bed with the inner cartridge of a ball-point pen. One of the things he likes most is getting brightly-colored cards. The comrades say that during their visit, “Mumia repeatedly insists that the really important thing is to organize. ‘Nobody should underestimate what even a small number of organized people can achieve. My own survival is concrete proof for what organized action is capable of.’”

The event at the Hemiciclo reflected many of the current struggles in Mexico. As people expressed their support for Mumia, some urged everyone to join in the mobilizations against COP16 in Cancún this coming November and December and others called for support for the displaced Zapatista communities under attack, and for support of the autonomous municipality of San Juan Copala, where people are living a day to day massacre. Some of those who spoke are resisting the destruction of the urban zones of Magdalena Contreras and Tlahuac on the edges of Mexico City, and others are resisting attacks on students by hired thugs at CCH Vallejo. People were urged to defend the indigenous land recoveries in Ostula, Michoacán, and to support the community police there and in Guerrero, where these groups practice the organized self defense of their communities.

A number of people expressed their support for the political prisoners of Mexico, and especially for young Victor Herrera Govea. His sister Mary said: “…Unjust trials… Yes, we know about them. Down here and up there, they’re an everyday thing. They’re one of the arms of the government against those bothersome people who never shut up in the face of all the absurd things going on in this unequal, devastating world. In addition to Mumia’s case and many others in the world, we have the case of Víctor Herrera Govea, locked up since October 2, 2009 for the crime of going out to march in repudiation of a massacre committed 41 years ago, one that is still going on at this very moment in every corner of the Mexican territory… His trial is also marked by many irregularities… And through all this, we’ve come to understand that these trials aren’t judicial. They’re the desperate response of a tyrant whose interests are threatened. They’re the smack of a Goliath defending itself against an upstart David … Mumia’s vitality and the consistent denunciations that he makes from death row, along with his refusal to fall down or fall back during the last 29 years, is maddening to the United States government. Mumia’s struggle is our struggle. His death is our death. His life is our life. His freedom is our freedom. Victor’s freedom is our freedom”.

Mexico’s political prisoners include the indigenous comrades Alberto Patishtán in Chiapas, Abraham Ramírez Vazquez en Oaxaca, the Loxicha prisoners in Oaxaca, and the anarchists and eco-anarchists arrested in recent months. Support was expressed for international political prisoners, including Leonard Peltier, the MOVE 9, the Angola 3, the 5 Cubans jailed in the United States, the Palestinian prisoners, the Mapuche prisoners on hunger strike in Chile, and the anarchists recently arrested in Chile.

The representative of Amig@s de Mumia said: “We’re here today to say NO to the death penalty for Mumia Abu-Jamal and to demand the abolition of the death penalty in the world. We also oppose long sentences, and especially life sentences. Now it is plain to see that the Mexican authorities intend to duplicate these aspects of the United States judicial system, which have only resulted in tremendous injustices and human suffering. We’re here today because we want to live in a world without prisons. We are wholeheartedly opposed to the imposition in Mexico of the United States prison system, which has resulted in the massive construction of prisons, the privatization of prisons, and a tremendous explosion in the prison population. We’re here today to demand freedom for all political prisoners in Mexico and the world. The recent triumph of the liberation of all the Atenco prisoners shows that it is possible to free all the rest”.

It’s reported that as the cyclists resumed their ride along Reforma, they didn’t have it in them to pass by the United States Embassy without blocking the street for a little while and shouting ¡Free Mumia! again and again. 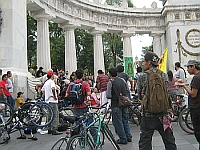 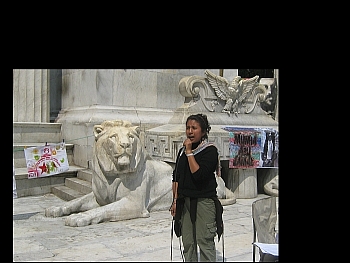 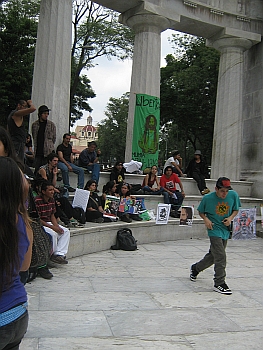 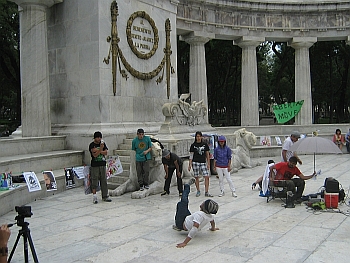 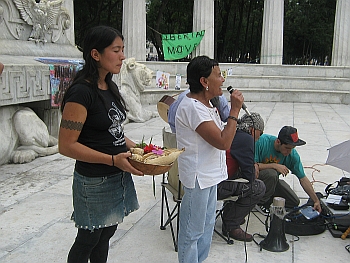 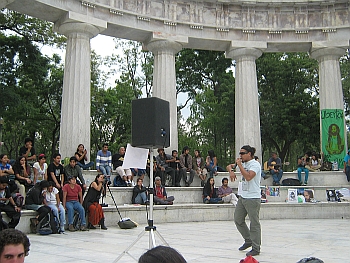 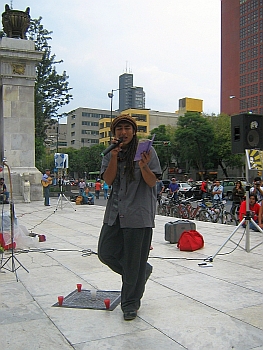 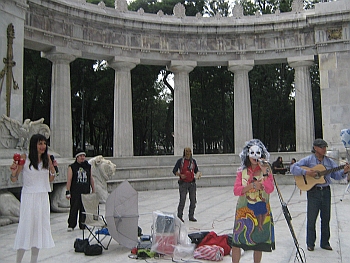