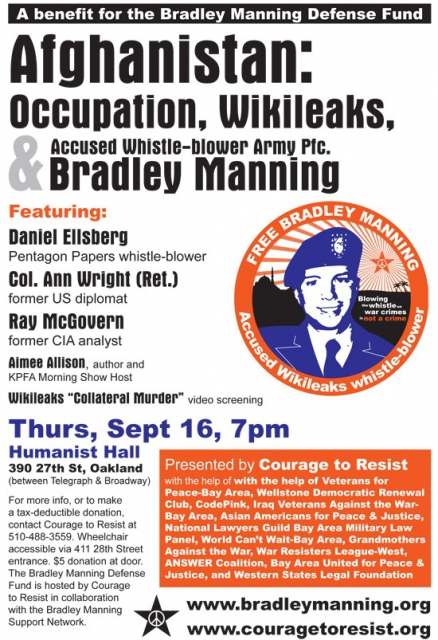 original image (550x803)
THURSDAY: On Sept. 16 at Oakland’s Humanist Hall, Ellsberg, US Army Col. Ann Wright (ret.), a former US diplomat to Afghanistan and Ray McGovern, senior CIA analyst (ret.) will kick off a nationwide series of support events for Manning in 18 US cities. They will call for Manning’s release and for honesty in United States war policies in Iraq and Afghanistan. The event starts at 7pm in the Humanist Hall, 390 27th Street, Oakland, California.

Daniel Ellsberg helped end the war in Vietnam when he leaked the Pentagon Papers to the press in 1970. Pfc. Bradley Manning, the alleged “whistleblower” accused of releasing documents and combat video showing the gunning down of Iraqi civilians and Reuters journalists to Wikileaks. Manning was not born when Ellsberg blew the whistle on the Vietnam War, but Ellsberg says, “Soldiers sworn oath is to defend and support the Constitution. Bradley Manning has been defending and supporting our Constitution."

Former senior CIA Analyst McGovern, who prepared daily security briefings for both President’s Reagan and George H.W. Bush, says combat video of civilians being machine-gunned should be released: “And it is that video that Private Manning is accused of giving to Wikileaks.” In contrast he says, “Our Secretary of Defense had not one word of regret about the dozen human beings, including two employees of Reuters, murdered on that fateful day in July 2007—or about the now-fatherless children who were seriously wounded.”

"To suggest that 'lives were put in danger' by the release of the WikiLeaks documents is the most cynical of statements,” says Michael Moore, who will be broadcasting the event live at http://www.MichaelMoore.com on Thursday Sept. 16 from 7-9pm (Pacific Standard Time). He continues, “Lives were put in danger the night we invaded the sovereign nation of Iraq, an act that had nothing to do with what the Bradley Mannings of this country signed up for: to defend our people from attack. It was a war based on a complete lie and lives were not only 'put in danger,' hundreds of thousands of them were exterminated. For those who organized this massacre to point a finger at Bradley Manning is the ultimate example of Orwellian hypocrisy."

The combat videos and other documents released by Wikileaks at http://www.collateralmurder.com led to the arrest of Manning in May 2010, and he is now being held in Quantico, Virginia. If convicted, he faces up to 52 years in prison and is currently being held in solitary confinement.

###
http://CourageToResist.org
Add Your Comments
Support Independent Media
We are 100% volunteer and depend on your participation to sustain our efforts!