Challenging the Darkness: Peacecamp2010 goes on as the Repression Deepens

by Robert Norse (rnorse3 [at] hotmail.com)
Peacecamp2010 continues its nightly 8:15 PM meetings on Center St. in front of City Hall (also check the area directly in front of City Hall Chambers). The sleepy soldiers of civil liberties have now gone more than 60 nights of continuous "illegal" sleeping in a City that has no shelter for 95% of its homeless and uses its own 11 PM to 8:30 AM Sleeping Ban law to criminalize homeless people throughout the City at night. A new lawless crackdown on political protest increased the pressure on the sleepers in the last week with ongoing property seizures, closed-off public areas, heightened "security measures" and other telltale badge-and-gun obscenities designed to terrorize poor people into surrendering their rights.
This last week saw high-intensity klieg lights at night powered by a noisy noxious generator spotlighting sleepers at night, new unprecedented "closing hours" of the City Hall Courtyard precluding peaceful protest presence there, and heightened friction from a patrolling First Alarm security guard (who began to hassle medical marijuana users for the first time at PeaceCamp2010's nightly meeting).

The City Parks & Recreation boss Dannettee Shoemaker apparently okayed closing off the entire City Hall complex at night without any public input, public discussion, consultation with the P & R commission, or respect for the wording of the relevant Municipal Code:

Police began warning and then ticketing PC2010 vigilers for simply being in that now-forbidden zone, previously open to the public for decades. Additionally neither Shoemaker, Mayor Rotkin, nor the new City Manager Martin Bernal offered any crime figures to justify the lights, the increased First Alarm surveillance, or the closing off of public space.


NEW PUBLIC SPACE SEIZURES
Three days ago city workers posted the front of the library on Church St. with a sign banning sitting on the benches in front of the library 9 PM to 9 AM where many homeless people and weary residents have traditionally sat. By Thursday, an identical 'No Trespassing at Night' sign had been posted defacing the side of the library on Center St. First Alarm security extended their harassment activities and time period to now harass PC 2010 activists who had moved across the street to continue to be "legal".

The activist were willing to be ticketed for sleeping, but didn't want the focus of the protest to be muddied with other charges. Additionally sleeping tickets given--either under the City's unconstitutional Municipal Code 6..36 or the state Lodging law 647e--can be probably be effectively fought by pointing out the City's well-known lack of legal shelter.

So City Sleepslayers have adopted a new tactic. The new signage, however unconstitutional, literally pulls the the ground out from under the feet of those protesting. The signage makes any kind of presence there, and now around the outside of the library illegal.


SHOEMAKER'S SHOCK TROOPS: NO PROOF OF "CRIME" , JUST NEW "NO GO" ZONES
Since the police, P & R, and City Manager have presented no statistics showing any increased crime in these areas, other than the crime of "sleeping" (which actually has remained at about the same level), the only reasonable conclusion to be drawn is that this is a direct attack on the First Amendment rights of those trying to awaken the conscience of City Hall through peaceful civil disobedience.

E-mail demands to Shoemaker and Bernal asking for the public documents relevant to the new signage have been ignored by both the P&R and the City Manager's office. Shoemaker's P & R has long made the absurd claim that they have no paper record of the work they order, how the decisions were arrived at, who put in the input, what departmental discussions happened, --whether the issue be benches on the mall of this latest assault on public spaces.

To understand the magnitude of the threat here, note the further wording of MC 13.04.011 (which was amended in 2006 to eliminate the requirement that public space closure must first go through a vote of the P & R Commission: see my comments at the time at

This is clearly a huge amount of public space to be under the thumb and at the mercy of one unaccountable unelected bureaucrat.

Even though "consulting" with the P&R Commission is still required, there is no indication that Shoemaker did so before posting the signage at City Hall and the library. She gave no indication of that in response to the e-mail I sent her.


HOMELESS SERVICE CENTER STONEWALLING CONTINUES
Meanwhile, the Homeless Services Center, which used to give out letters admitting there was no shelter there on any particular night of the summer, have changed their policy to require Waiting List status, possibly under pressure from city authorities concerned that protesters will be emboldened to assert their right to sleep on public property given the absolute lack of shelter space.

This HSC stonewalling strategy is counterproductive, considering their personnel can be subpoenaed into court in every case to testify that there was no shelter that night, even if the homeless victim ticketed didn't previously sign up (for non-existent shelter). The HSC's Board of Directors Chair Sally Williams, though agreeing to meet with homeless activists, has not yet issued a letter acknowledging the lack of shelter space and agreeing to provide a phone line with a recording that states "no shelter tonight" so that police can stop their futile ticketing or be guilty of clear harassment--as proposed by attorney-activist Ed Frey.

Meanwhile police are still holding such threatening items as the shoes of 72-year old Collette Connolly, the "End the Sleeping Ban" signs of protester Gary Johnson, and the community coffee megamug not to mention blankets, sleeping bags, two tables, several chairs, and political literature. Sara, nother pregnant homeless woman, has been driven away from the protest by the increased police harassment to sleep in a less safe area.

The story approvingly reports on the expansion of First Alarm goonsquad activity to Pacific Avenue with the vague inflammatory but unsubstantiated claims of "vandalism, vagrancy, and violence". In the current economic climate where people are criminalized for sleep and resorting to stealing food, increased police repression is likely to lead to increased violence. Or the silence of the police state. We should look to see more tickets for performing, sitting, sparechanging, roosting too near a penguin statue in the near future.


AFTERNOTE
The high-intensity spotlights and the generator were removed on Thursday September 2nd or thereabouts, returning a shroud of darkness to the front of City Hall and the side of the library across the street.

Apparently officials felt that the new trespass law would either intimidate away or jail those who had been sleeping there.

"Get it Done" Gary Johnson, as I call him, was still sleeping there throughout the week in spite of the escalating attacks.

Rumor has it that Anna Richardson was arrested for sleeping last night.

Support PeaceCamp2010 in their legal and life struggle to awaken the conscience of Santa Cruz. Call 423-4833. Check out their website at http://www.peacecamp2010.blogspot.com for more direct contact information.

Demand that City Manager Martin Bernal (the most powerful official in the City) stop the crackdown on the homeless community and the peaceful Peacecamp2010 vigilers. Call 420-5030.

Demand acting Police Chief Vogel instruct his officers not to ticket sleepers unless they can guarantee there's a shelter space available. Call 420-5810.

Demand the HSC come clean on its absence of summer shelter & issue a public letter to that effect that homeless people can use to officially inform police. Call 458-6020.

Demand City Council change the Sleeping Ban law to a law prohibiting camping or sleeping in a littered area, which would require homeless people to clean up the areas they sleep in, but not criminalize them for the act of sleeping. Call 420-5020. 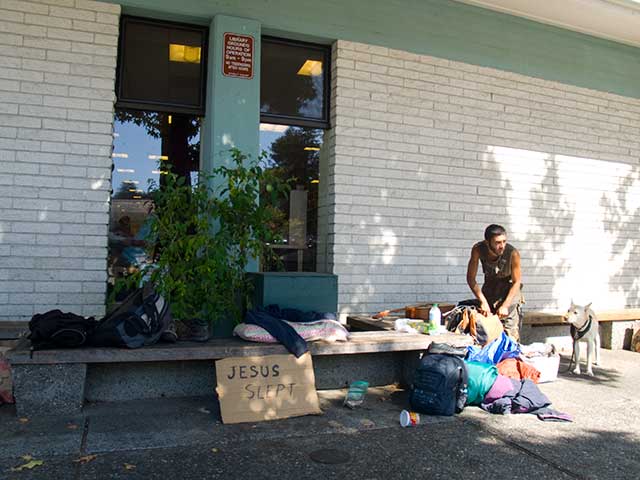 The person in the photo told Robert Norse that he was stopped and detained by six SCPD officers while walking his dog on the sidewalk of Center St. Officer Durate claimed he had received a call that the individual had been punching his dog. The accusation was vehemently denied, and seemed to be absurd.
§Peace Camp 2010 Enters Third Month
by ~Bradley 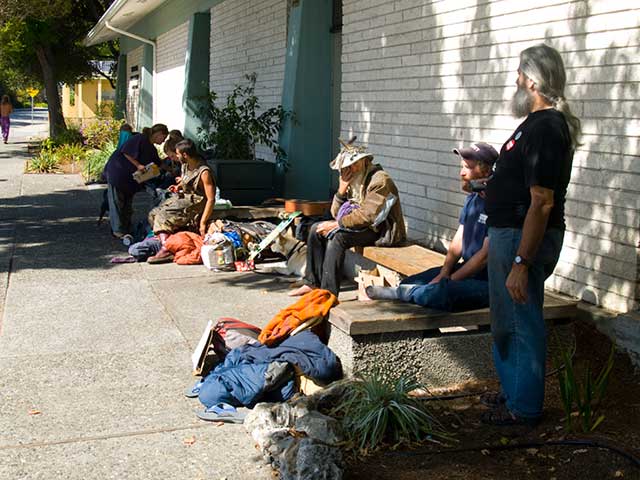 Add Your Comments
Latest Comments
Listed below are the latest comments about this post.
These comments are submitted anonymously by website visitors.
TITLE
AUTHOR
DATE
I'll give you the benefit of the doubt
revolution2010
You got it wrong
Nightwing
As always
revolution2010
More Recent Rumor
Robert Norse
Rumor?
Nightwing
Support Independent Media
We are 100% volunteer and depend on your participation to sustain our efforts!