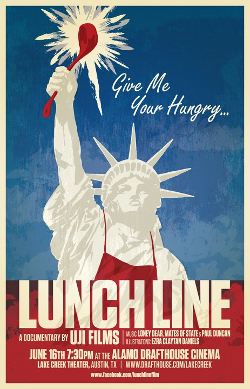 Lunch Line
In conjunction with Slow Food Sacramento. A portion of the admission will benefit Time For Lunch, a campaign to give kids the school food they deserve.

Community activists for real food in schools will be in attendance to speak following the film.

"Lunch Line" reframes the school lunch debate through an examination of the program's surprising past, uncertain present, and possible future.

In the film, six kids from one of the toughest neighborhoods in Chicago set out to fix school lunch and end up at the White House. Their unlikely journey parallels the dramatic transformation of school lunch from a weak patchwork of local anti-hunger efforts to a robust national feeding program. The film tracks key moments in school food and child nutrition from 1940s, 1960s, and 1980s to the present – revealing political twists, surprising alliances, and more common ground than people realize.

Along the way, Senators, Secretaries of Agriculture, entrepreneurs, and activists from across the political spectrum add top-down perspective to a bottom-up film about the American political process, the health and welfare of its future, and the realities of feeding more than 31 million children a day.

About Slow Food Sacramento: Slow Food Sacramento is the local chapter of Slow Food, an international organization, founded in Italy 1986, whose aim is to protect the pleasures of the table from the homogenization of modern fast food and life. Through a variety of initiatives it promotes gastronomic culture, develops taste education, conserves agricultural biodiversity and protects traditional foods at risk of extinction. The Sacramento chapter hosts a wide range of educational and convivial events throughout the year to introduce you to the producers and creators of some of the region's outstanding foods, farms, and restaurants.
END_OF_DOCUMENT_TOKEN_TO_BE_REPLACED
Added to the calendar on Mon, Aug 30, 2010 9:52PM
§
by Movies on a Big Screen

END_OF_DOCUMENT_TOKEN_TO_BE_REPLACED
Add Your Comments
Support Independent Media
We are 100% volunteer and depend on your participation to sustain our efforts!