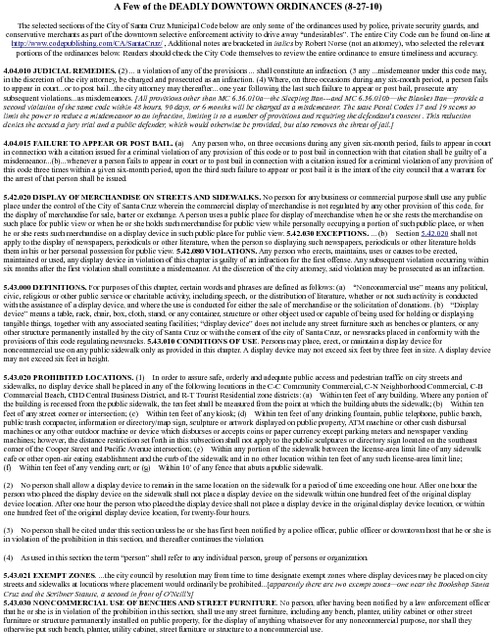 Keeping YOU "safe" and the city "squeaky clean"!
Add Your Comments

Becky also wants law and order. When someone recently stuck a pear in the tailpipe of her car the first thing she did was call the police, calling it an act of terrorism. She even suggested that the police notify the FBI about it! In this case I'm sure they immediately put the report in the circular file cabinet. Who reports a pear being lodged in their tailpipe to the police?
Add a Comment
§What's the update?
by Garry
Tuesday Aug 31st, 2010 1:00 PM
I don't get what the updates are. All of those ordinances have been on the books now for awhile. Does Robert think writing his own personal comments in brackets is an update? Even those comments are the same ones he's been making for a long time. This just isn't anything new.
Add a Comment
§Afterthoughts
by Robert Norse
Tuesday Aug 31st, 2010 1:57 PM
Police assistance in dealing with theft, assault, etc. is a different kettle of fish from laws selectively used to constrict the public space and/or criminalize people who are visibly poor and homeless, or struggling to find alternatives to the landlord/wageslave racket.

These laws devour previously public spaces putting them under the control of narrow commercial interests at the expense of the broader commons. It's been happening throughout Santa Cruz in the parks, the Pogonip, Pacific Avenue, along the beaches, and even in the lowly public parking lots.

The damage done is far wider than the number of actual tickets issued--since police use the fear of citation to "persuade" people to abandon their rights inch by inch, bench by bench, parking lot by parking lot.

Sorry for the small typeface; I'll try and have a better version up soon.

If anyone's interested in making Public Records Act requests of the PD and other agencies to find out who's actually been mainly ticketed under these laws, please get in touch with me at rnorse3 [at] hotmail.com. Or post your results here. It's likely that most of the citations are being issued to people who are homeless or with 115 Coral St. addresses.
Add a Comment
§Same old message none the less
by Nightwing
Tuesday Aug 31st, 2010 3:47 PM
"Sorry for the small typeface; I'll try and have a better version up soon."

Hasn't anyone told you that bigger is not better? It's still going to be the same message.
Add a Comment
§Thanks, but no thanks
by Nightwing
Tuesday Aug 31st, 2010 4:04 PM
"These laws devour previously public spaces putting them under the control of narrow commercial interests at the expense of the broader commons. It's been happening throughout Santa Cruz in the parks, the Pogonip, Pacific Avenue, along the beaches, and even in the lowly public parking lots. "

And now thanks to you we can add the city hall property to the list. That land had been a place people could sleep and find shelter from the rain for decades. Thanks to your stunt at that location it's now been turned into a trespass zone with tickets applicable. Every time you cause a commotion more and more public space gets taken away. And not just from the average person, but from the homeless folks you pretend to advocate for. When will you be satisfied? Will you finally get the picture when you've made the entire city a trespass zone for the homeless and less well off? For the last ten years I've noticed that every time you get involved in something the situation gets worse for the homeless. If I didn't know better I would say you're a mole for the city, dropping bombs to help make their cases for them.

Add a Comment
§He's a one man wrecking crew
by Seriously
Tuesday Aug 31st, 2010 5:35 PM
Norse is doing more to harm the homeless and turn the citizenry of Santa Cruz against them, while poseuing as their savior, than any governmental agency that he's blaming for same.

And as for this website; is it really IndyBay or it is simply his bully pulpit? When I count that more than half of the last 20 posts are by he or his group, I think the latter.
Add a Comment
§One man and one woman
by Nightwing
Wednesday Sep 1st, 2010 2:46 PM
Robert and Becky together are destroying the homeless movement in Santa Cruz. Everything they touch does nothing more than cause ill will between the community and the homeless population. And they don't even act like real activists. Did either of them get a ticket, citation, or get arrested? NO! Because they were at home in bed every night. Ed Frey, who I have my own issues with, at least stood up for what he believed in and put himself on the line. He stayed with the protesters. He slept with the protesters. He made them feel as if he was on their side. And when the tickets and arrests came he took them right along with everyone else. The man has integrity and shows follow thru. Norse and Johnson didn't put themselves out in any way. They made sure that when the tickets came they took off. Tells you something. So no, Norse is not a one man wrecking crew. He has that Johnson woman conjoined at his hip. Neither one getting their hands dirty.
Add a Comment
§Post those accounts!
by Robert Norse
Saturday Oct 23rd, 2010 1:31 PM
The Camping Ordinance was recently amended. See http://www.indybay.org/newsitems/2010/09/16/18658837.php .

Report and post accounts of police using these abusive ordinances (or other laws) to criminalize innocent behavior downtown. Audio and video are particularly helpful, but written accounts are good too. It's also helpful to describe court outcomes as well as announce upcoming court dates.

A recent post as an example: "Four SCPD Officers Issue Groundless Citation to Woman for Spitting on Pacific Avenue" at http://www.indybay.org/newsitems/2010/10/20/18661857.php

Contact HUFF (Homeless United for Friendship & Freedom) at 423-HUFF (4833) or come to a HUFF meeting at the Abbey Cafe (Wednesdays 10:30 AM to 12:30 PM) (Mission and Hiway 1 at the Vintage Faith Church). Check out http://www.huffsantacruz.org --the website is currently being reorganized.

We can give you some suggestions and let the community know what the police, hosts, First Alarm, and other uniformed gendarmes are doing.

You can also leave a record of your citation at the Sub Rosa Cafe in one of their public notebooks or post an account of what happened here on indybay.org/santacruz.
Add a Comment
§Dogs on Pacific Avenue Ordinance Amended
by Robert Norse
Monday Aug 29th, 2011 12:16 AM
MC 8.14 (to be found at http://www.codepublishing.com/CA/SantaCruz/) is amended by http://64.175.136.240/sirepub/cache/2/mxodyhv51gaqgn21ksy32vyf/287937708292011120817727.PDF suspending the dogs on Pacific Avenue law, but further criminalizing homeless people, political petitioners, and musicians, who have their dogs with them while panhanding, petitioning, or performing.

Sentinel Stories Mentioning This New Anti-Homeless Policy and the General Changes
http://www.santacruzsentinel.com/ci_18758544 "Pooches on Pacific: Thursday marks a first in 35 years"
http://www.santacruzsentinel.com/ci_18466797?source=pkg "Santa Cruz City Council gives first thumbs-up to dogs downtown"
(A list of related stories can be found there at either of these sites.)
Add a Comment
§Text of the Dog Law
by Robert Norse
Saturday Jan 26th, 2013 1:21 PM
The wording of the current law is:

There has recently been a rash of police actions against emotional service animals on Pacific Avenue and elsewhere. Please report and post these incidents when they come up. A recent court decision by Judge John Gallagher in the case of Briana Brewer specifically found that citations to criminalize homeless people displaying their craftwork for donation are false; that is, forcing you to sign a promise to appear in court which is a "non-custodial" arrest is a false arrest. Please report any such behavior by cops, hosts, security guards (i.e. those who demand documentation for service animals or ticket for their being off a leash or sitting nearby, etc.).
Add a Comment
§More Updates
by Robert Norse
Tuesday Mar 18th, 2014 10:19 PM
Still not combined in one flyer, but additional ordinances to be added are described and referenced at https://www.indybay.org/newsitems/2014/03/10/18752404.php ("2013: A Nasty Year Heavy With New Anti-Homeless Laws").
Add a Comment
Support Independent Media
We are 100% volunteer and depend on your participation to sustain our efforts!