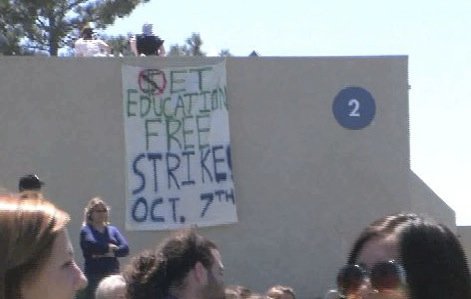 Student organizers handed out literature and dropped a banner during the “Presidents Barbeque” at CSU Monterey Bay on Sunday, August 22. The University President’s speech, which occurs every year on the day before class starts, had no relevance to students’ lives and once again proved the disconnect between those who attend the university and those who manage it. This year a group of students contributed to the event by passing out copies of CSUMB’s Otter Disorientation Guide, a guide to a more realistic college experience. It also echoed the recent statewide call to action to defend public education on October 7th. Several students dropped a banner over the side of a building that faced the crowd. The sign read “Set Education Free—Strike! Oct. 7th”. The banner was quickly removed, exposing the anti-free speech attitude of those who run the university.

The CSUMB Disorientation guide can be found here:
http://guerrillathink.wordpress.com/

Several articles in the guide above were reprinted from the UC Berkeley guide which can be found here:
http://caldisorientation.org/
Add Your Comments
LATEST COMMENTS ABOUT THIS ARTICLE
Listed below are the latest comments about this post.
These comments are submitted anonymously by website visitors.