by Robert Norse (rnorse3 [at] hotmail.com)
In another move clamping down on public use of previously public space, the city posted "closing hours" on the City Hall grounds for the first time, without any kind of public hearing, announcement, or rationale. Last night homeless activists reported five more false citations being given for sleeping or lodging, unconstitutional because the Homeless Services Center has acknowledged and KION reported, that all available shelter has a waiting list of weeks. Hence police know such citations will be thrown out by courts on a "necessity" defense (or just a letter from HSC).
In front of City Hall a $100/night generator was still chugging and growling through the night tonight to fuel the burning glare of 4 15' high klieg lights turned on at 10 PM to protect the public from the menace of homeless sleepers.

On Saturday morning, police gave out 5 more citations (and perhaps one arrest, reports were unclear). Those\ who slept in front of City Hall, reported one nocturnal newsnoser got the more serious 647e misdemeanor "lodging" tickets; those who slept across the street at the library got MC 6.36.010a infraction citations.

Curbhugger Chris Doyan, who left the protest on Tuesday, came by to visit in the afternoon and saw no one there, thinking the protest had been crushed. But by 8:15 p.m. more than a dozen activists gathered in the soon-to-be-forbidden courtyard area, to discuss strategy for the night and for the nights to come.

There was talk of setting up a Tent City, debate over who should speak for the protest and concern about making new signs (to replace those snatched by the police, along with the Peacecamp2010 table, which was removed a few days before). The group touched on broader issues of public accountability and transparency, welcomed a few new members, and determined it would meet nightly in hopes of growing stronger and getting the message "End the Sleeping Ban" out to the broader community.

By midnight Frank Lopez was sleeping under an American flag blanket on what the security guard told him was a "forbidden spot". Ed Frey scoffed at the new posted sign, noting "it doesn't say where the courtyard begins and the entrance ends; let's see a diagram or a copy of the ordinance."

When then-Mayor Mike Rotkin tried to close down City Hall in 1996 to end another homeless protest against the Sleeping Ban, the City Council declined to back him and Judge Samuel Stevens ended up granting a very limited injunction requiring that folks there "obey all laws". This time, in what appears to be a very slippery legal maneuver, Parks and Recreation, which controls virtually all the public space around public buildings, simply issued an edict closing the area without a hearing. Naturally, there were no statistics presented showing any increased crime rate.

" Doesn't Santa Cruz have one of the highest rates of rape and the lowest rates of rapist apprehension?" asked one protester (See "Rape Cover-Up in Santa Cruz? Greensite v. Rotkin on FRSC" at http://www.indybay.org/newsitems/2007/07/03/18433006.php

"Who owns this area?" asked one protester . "I thought the public spaces belonged to the public." Not in Santa Cruz apparently. Public areas can be closed at the whim of Dannettee Shoemaker, the Parks and Rec czarina.

"Homeless sleepers" (ominously painted as "homeless camps") have been the pretext for a recent push to open up a police path through the Pogonip, shut down the Town Clock at night in 1991, closed the parks (and their bathrooms) at night in 1984, criminalized being on the levee at night in the late 90's, closed the Pogonip at night, and made sitting down on 95% of the downtown sidewalks criminal activity.

Police Chief Kevin Vogel, trumpeted the bogus "menace" of "child molesters" and other "public safety" threats among the small band of principled and sleeplogged protesters at City Hall. See "Sentinel Misinformation Allows Police to Install "Don't Sleep Here" Klieg Lights" at http://peacecamp2010.blogspot.com/2010/08/santa-cruz-homeless-protest-brightened.html . Vogel himself was exposed as a "constitution molester" by his illegal political surveillance activities of late 2005 when he ordered his officers to spy on a peaceful DIY New Year's celebration prep (See "Police Auditor's Report Reportedly Available In Main Library" at http://www.indybay.org/newsitems/2006/03/21/18097021.php Police, City Attorney, and Judiciary jointly engaged in target practice using Modes as the bulls-eye when he was convicted of "walking" in last year's New Year's parade without a permit.

Spirits at Peacecamp2010 were still high when I left the protest at midnight--72-year old Collette Connolly had laid out her sleeping bag on the sidewalk--so as to be "legal" following the new edict eliminating homeless sleepers from the city hall grounds.

"Since they won't listen to us during the day at the seat of government and arrest us at night when we try to sleep her, perhaps we should simply go visit those in real power--the business owners, and start sleeping and picketing in front of their businesses during the day," said one protesters, who asked not to be named. "City Hall is pretty isolated; perhaps the community and the tourists need to see what Santa Cruz police are doing to homeless people in the broad light of day. That'll also save them money on those big fancy klieg lights."
§Peace Camp 2010
by ~Bradley (bradley [at] riseup.net) 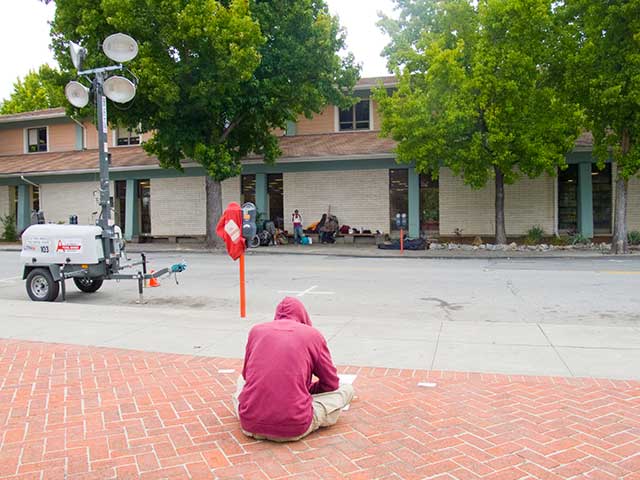 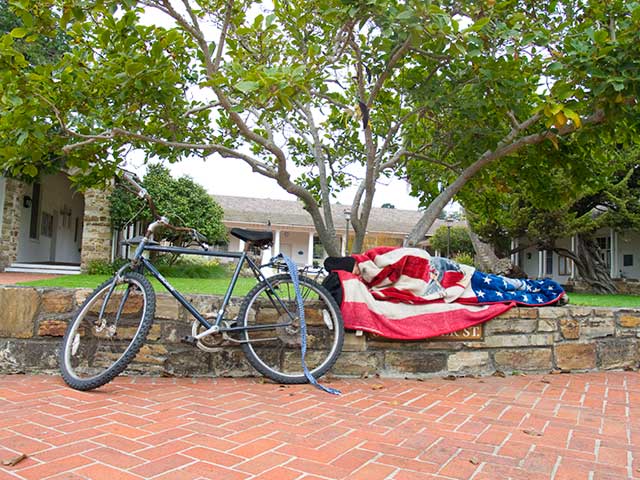 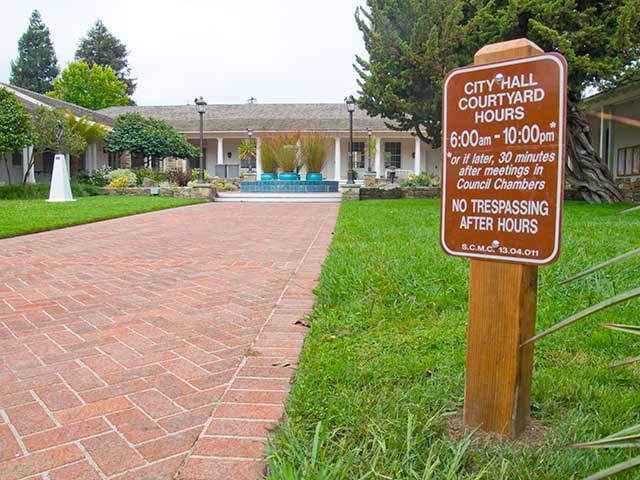 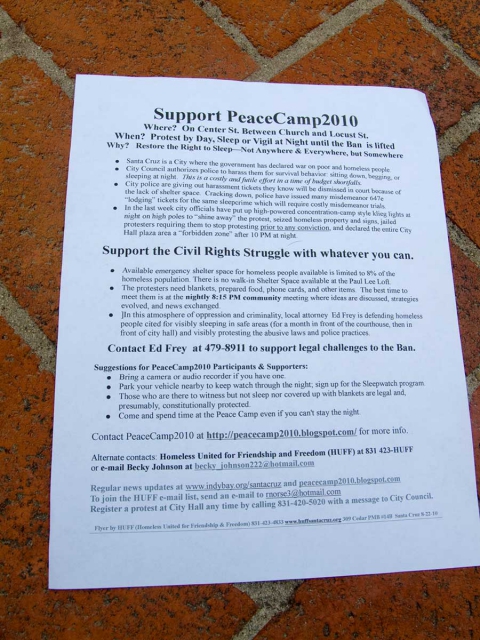 original image (900x1200)
A flyer with more information about Peace Camp is displayed on the bricks outside Santa Cruz City Hall.
§Update
by Robert Norse
This morning, police came and issued more citations to Frank Lopez, Ed Frey, Gary Johnson, and Collette Connolly. Gary and Collette were sleeping on the sidewalk in front of City Hall.

Collette refused to sign the citation. Perhaps she felt she'd been given too many already (possibly 4 647e citations now). She was taken to jail.

Ed and Frank were sleeping on the red brick area used for the last week by protest sleepers but supposedly "closed" now after 10 PM. Police said nothing about the new "No Trespassing" law, but gave out misdemeanor 647e citations.

Two pregnant women were sleeping on the other side of the street up against the library on the benches there. Four men apparently were keeping watch and woke them before the police were able to cite them.

The Rotkin debate and the HSC "no shelter at the inn" Board Meeting discussion were played on the Free Radio stream today and should be archived as noted above by tomorrow.

§Audio files of the Rotkin Sidewalk Debate and the Homeless Services Center Confrontation
by Robert Norse
http://www.radiolibre.org/brb/brb100822.mp3 (fast forward to about half way through the audio file).
§Support PeaceCamp2010
by HUFF (rnorse3 [at] hotmail.com) 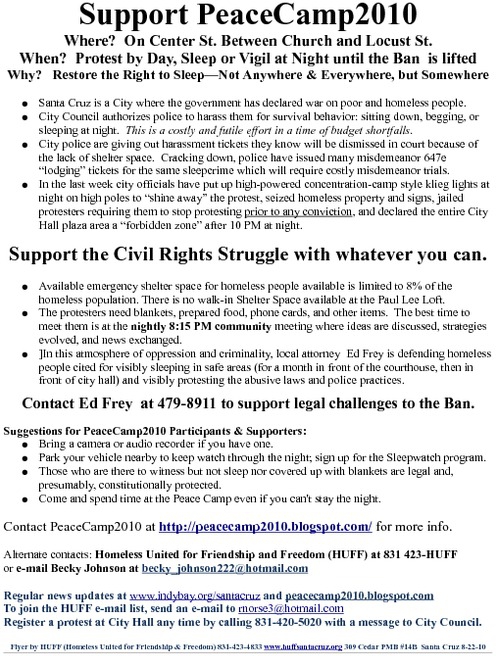 Download PDF (87.5KB)
Where? On Center St. Between Church and Locust St.
When? Protest by Day, Sleep or Vigil at Night until the Ban is lifted
Why? Restore the Right to Sleep—Not Anywhere & Everywhere, but Somewhere

Santa Cruz is a City where the government has declared war on poor and homeless people.
City Council authorizes police to harass them for survival behavior: sitting down, begging, or sleeping at night.  This is a costly and futile effort in a time of budget shortfalls.
City police are giving out harassment tickets they know will be dismissed in court because of the lack of shelter space. Cracking down, police have issued many misdemeanor 647e “lodging” tickets for the same sleepcrime which will require costly misdemeanor trials.
In the last week city officials have put up high-powered concentration-camp style klieg lights at night on high poles to “shine away” the protest, seized homeless property and signs, jailed protesters requiring them to stop protesting prior to any conviction, and declared the entire City Hall plaza area a “forbidden zone” after 10 PM at night.
§Support PeaceCamp 2010
by HUFF (rnorse3 [at] hotmail.com) 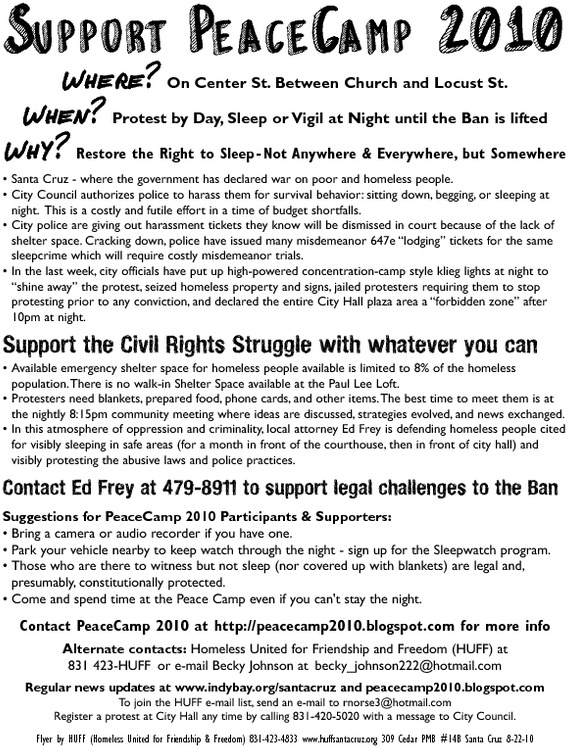 Download PDF (409.3KB)
Support PeaceCamp 2010 Where? On Center St. Between Church and Locust St.
When? Protest by Day, Sleep or Vigil at Night until the Ban is lifted
Why? Restore the Right to Sleep-Not Anywhere & Everywhere, but Somewhere
Add Your Comments
Latest Comments
Listed below are the latest comments about this post.
These comments are submitted anonymously by website visitors.
TITLE
AUTHOR
DATE
Correction
Robert Norse
Okay, you're just pretending to be stupid
Amazon Gorilla
One other thing...
revolution2010
Nothing remotely funny about violating peoples' civil rights
revolution2010
This bears repeating
Michael T
Ho ho ho
Amuse Bouche
"Amazed Grace", I would call this a fight
revolution2010
Wrong, Revolution
Amazed Grace
Hang in there
revolution2010
WTF Robert. Seriously, WTF?
Amazed
Support Independent Media
We are 100% volunteer and depend on your participation to sustain our efforts!