Add an Event
Newswire
Calendar
Features
Home
Donate
From the Open-Publishing Calendar
From the Open-Publishing Newswire
Indybay Feature
Publish to Newswire
Add an Event
Related Categories: Santa Cruz Indymedia | Health, Housing & Public Services | Police State & Prisons
Homeless Settle In As Police Continue Nighttime Raids & Daytime Surveillence
by Robert Norse
Monday Aug 16th, 2010 9:03 PM
I walked from the Courtroom farce of the Wes Modes "conviction" for walking in the New Year's parade "knowingly" without a permit to PeaceCamp2010 with Indybay photographer and journalist Bradley. It was encouraging to find some people, the poorest and most vulnerable in our community, standing up--with very little support from the broader activist community--for the most basic of civil rights: the right to be left alone--the same right Wes Modes looked for in court this morning and couldn't find...
ARMED MEN WAKING UP PREGNANT WOMEN AND OLD MEN
In the Monday morning wee hours, I read Curbhugger Chris's Twitter thread reporting police repeatedly waking up tired homeless people with no legal place to sleep. The cops added insult to injury by going through the charade of insisting on presenting them with meaningless “shelter information” cards, which provided no legal shelter, while demanding their ID, interrogating them, and generally making them feel like second-class citizens.

The group of folks attempting to sleep included several men over 55 and two pregnant women.

WARNING THE POLICE
Earlier in the evening I'd followed around an officer who was asking for people's ID's before 11 PM (when it's still legal to sleep or cover up with blankets), advising people that they don't have to provide him with information. In fact, doing so helps them build cases later to drive them away from the relative security of the Peace Camp. The cop justified his genteel harassment by claiming he was “just warning” protesters of what they knew too well already.

After 11 PM police reportedly returned with flashlights, spotlights, and headlights—as many as ten times according to some. The nearly-hourly police visits prompted Watchman Jason and a companion to wake up all the sleepers so as to make their presence there “legal” and limit the number of tickets.

I found this curious, since each citation is an indictment of the officer issuing it as well as any superior authorizing the citation, since both officer and superior know full well that all tickets will be dismissed. There is no shelter at the Paul Lee Loft (the only general shelter for single people run by the Homeless Services Center]. Waiting lists are long and run 4-6 weeks. There will be no emergency walk-in shelter until the Winter Armory Shelter opens up in mid-November, if and when that happens.

I would hope any citations would be used as evidence that the SCPD is engaged in straight-forward harassment, a form of cruel and unusual punishment of innocent people banned by the Constitution. In Los Angeles in 2006, the 9th Circuit Court of Appeals ruled this kind of police behavior was unconstitutional as well as the bogus L.A. Sleeping Ban being used as the pretext to do it.

FALSE POLICE THREATS AND THE WORDING OF THE CAMPING ORDINANCE
Police falsely threatened them with arrest if they “slept again within 48 hours.” Sleeping itself is and can only be an infraction and so not an arrestable offense. MC 6.36.040 has clear wording here, limiting the fines and actually requiring the court to allow community service: “Any person who violates any section in this chapter is guilty of an infraction and shall be subject to a fine of not more than twenty dollars [$97 with added court fees]. Alternatively any person who violates any section in this chapter, in lieu of a fine may, if that person so requests, be required to provide no more than eight hours of community service.”

MC 6.36.050, allows for a misdemeanor arrest within 24 (not 48) hours but only for “camping”, not for the Sleeping and Blanket bans. It reads: “Any person who violates any section in this chapter, other than subsections (a) and (b) of Section 6.36.010, and is cited for such violation, and who within twenty-four hours after receiving such citation again violates the same section, is guilty of a misdemeanor.”

THE ROTKIN RESPONSE
At mid-morning Mayor Mike Rotkin parked his motorcycle and passed by the protesters, again, as ever, without speaking to them. Curbhugger Chris reported that he'd never come over to talk to them in the 5 days they'd been there. Throughout the 46 days PeaceCamp2010 the protesters provided a safe sleeping spot in front of the Courthouse, Rotkin issued statements to the press taunting the homeless group for lodging on county property when their grievance was the City's Sleeping ordinance. Now when the group has moved to sleep right outside the Mayor's office to provide him easy access to engage in a dialogue, the Mayor has repeatedly avoided them.

More to highlight the Mayor's hypocrisy than in hopes of any real movement, I called over to the Mayor and asked him to meet. He agreed, but said he didn't have his calendar with him, agreeing though that Friday would be a good day and would contact me in a few hours. Eight hours later I'd received no word.

SOME VICTIMS OF THE SLEEPING BAN WAR
Jennifer from Indiana, was trying to sleep during the day beside her three suitcases. She reported she'd been with the PeaceCamp for 2 weeks and felt it was “really good”, a safe place for her as a woman.

Jason reported that he and his pregnant girlfriend had been given bus tickets to leave town and return to Missouri by Danielle Long, the social worker, but alas, his girlfriend was arrested on a warrant at 5 AM this morning—for camping in Paso Robles, where authorities are using the Rotkin “hide out or get out” approach.

MORE THREATS
Meanwhile the City continues to pay a First Alarm security guard (perhaps several) to patrol the PeaceCamp with regular SCPD patrols stopping frequently to walk the area in search of straggly sleepers. There's been no estimate of the cost.

Additionally police have (falsely) informed protesters that they must limit their sleeping to the small cement area in front of the City Hall bordering the sidewalk, avoiding 95% of City Hall on pain of "arrest". Since the City Hall grounds are open 24 hours a day, and sleeping is illegal anywhere and everywhere, the "warning" is a misleading one. If the police choose to, they can ticket anyone for sleeping after 11 PM whether huddled together in a small space, or spread out over the City Hall grounds. 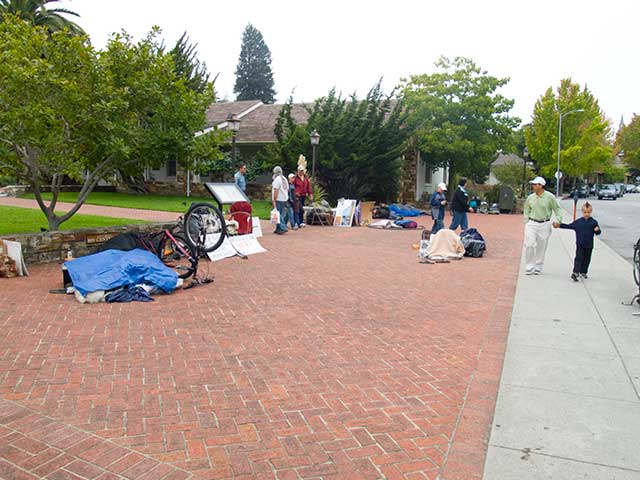 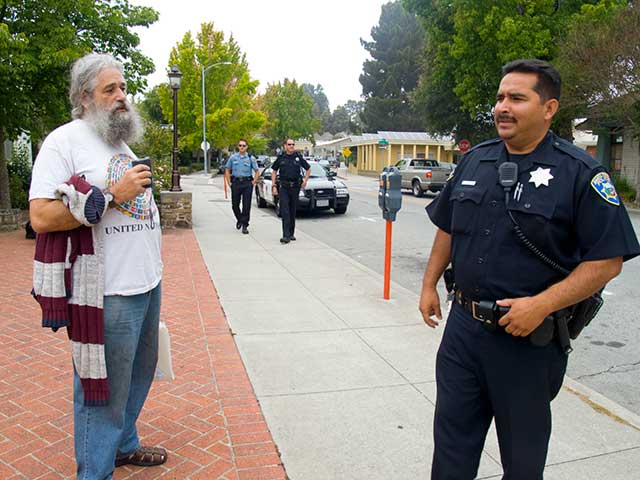