Add an Event
Newswire
Calendar
Features
Home
Donate
From the Open-Publishing Calendar
From the Open-Publishing Newswire
Indybay Feature
Publish to Newswire
Add an Event
Related Categories: San Francisco | U.S. | Environment & Forest Defense | Labor & Workers
Biotech Workers Struggle for Safety And Expose Systemic Cover-up At SF Conference
by Seth Sandronsky
Sunday Aug 15th, 2010 11:33 AM
The first national conference in the US was held in San Francisco on biotech workers and health and safety on July 17, 2010. This conference looked at the struggle of biotech workers to make sure their jobs are safe and the systemic cover-up by employers and the insurance industry to limit and hide their liability for workers injured on the job. 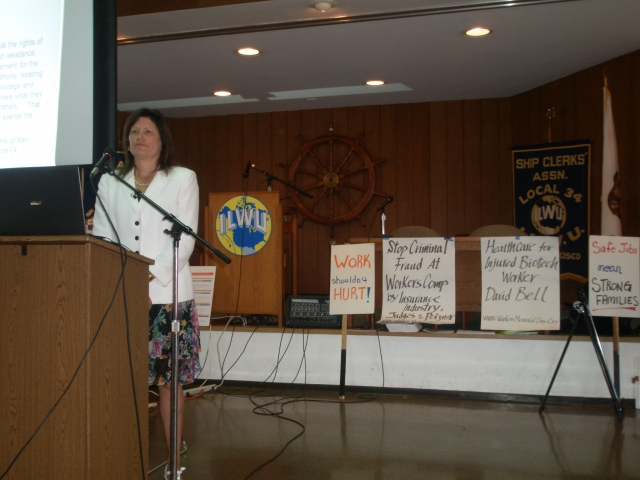 How safe is the workplace for those who labor in biotech, or applied technology based on biology? Just ask Steve Zeltzer, chair of the California Coalition for Workers Memorial Day. He organized the first–ever national conference on health and safety issues in the biotech industry in San Francisco recently.

“The purpose of this conference is to get out information about the issue of biotech products, their regulation and injured biotech workers in the US,” Zeltzer said. The conference took place July 17.

Becky McClain, a former scientist for Pfizer, Inc., gave the keynote talk. She worked in a Connecticut lab for Pfizer, the world’s biggest pharmaceutical firm, from 1995 to 2005. There, McClain developed genetic delivery systems for cloning into viruses. The purpose for that was to identify and remove targeted genes.

Meanwhile, as a health and safety officer for Pfizer, she fell ill. After taking a medical leave and failing to return to work by Pfizer’s deadline, the drug giant fired her. “I lost my career, and I lost my health,” McClain said.

She detailed a multi-year struggle with the federal Occupational Safety and Health Agency, state workers’ compensation system and a federal civil case to uncover the cause(s) of her illness. A recent outcome proved bittersweet.

This April, an eight-person federal jury awarded McClain $1.37 million for Pfizer violating her free speech and whistleblower rights concerning claims of unsafe working conditions. Those conditions ranged from workers’ offices inside labs and their break rooms in lab hallways.

Crucially, the judge in McClain’s case ruled there was a lack of sufficient evidence of exposure to genetically engineered lentiviruses with mouse embryonic stem cells that made her sick. (AIDS is a lentivirus.) OSHA, McClain said, told her that Pfizer could legally deny data on workers’ lab exposures. How? Pfizer’s information is protected as a trade secret.

There are thousands of biotech labs where tens of thousands of people work with genetically engineered viruses. She worries that this barely regulated industry poses health risks, and the populace is largely uniformed of such issues.

Sandi Trend of Citrus Heights (Sacramento) spoke after McClain. Trend is David Bell’s mother, a tireless investigator and a leading pioneer in publicly discussing safety issues in the biotech industry. She shared the story of Bell, who worked at AgraQuest, a biotech firm in Davis, Cal., where he fell ill 12 years ago.

Bell and Trend blame his bad health on that workplace. They claim exposure to living bacteria, fungi and insects sickened him. He worked at AgraQuest for just over five months as a researcher and technician on two crop and insect control projects.

That job, they insist, led to a series of head and respiratory maladies. One is histoplasmosis, a lung condition. Bell’s medical history over the past dozen years ranges from four sinus surgeries to monthly hook-ups for intravenous immunoglobulin (IV IG) transfusions. These transfusions strengthen his weakened immune system. Absent that, he is at-risk for cancer and other lethal diseases.

Trend outlined how Bell lost his claim for a California workers’ compensation settlement in 2007 due in no small measure to his employer in 2003 providing him with the wrong name of its insurer which still denied his claim. Bell learned the name of the company’s actual insurance firm and filed a claim with that insurer. The second and true insurer’s denial of Bell’s claim occurred 285 days after he began the filing process.

A former lawyer who worked at the firm that represented Agraquest’s insurer was the jurist in Bell’s workers’ compensation case. She threw out his claim due to the filing process of 40-plus weeks, and further denied that the workplace caused Bell’s injuries. Later, he lost an appeal.

According to Bell, his courtroom appearance should have never taken place. The California Labor Code requires an insurer to issue a “timely denial” of an employee’s claim during a 90-day period. The employee’s claim is compensable if not rejected in this period. That did not happen for Bell. AgraQuest’s actual insurer simply rejected his claim 195 days after the 90 day-period ended.

A claim is rebuttable after the 90-day period elapses with new evidence only. That did happen in Bell’s case.

Trend’s archived investigative work is at her website: biotechawareness.com/. She has documented nearly two dozen micro-organisms that her son worked with that were found in his body. She will present evidence of bias and conflicts of interest in her son’s workers’ compensation case before the California Commission on Judicial Performance on Aug. 25.

Larry Rose, M.D., was the last doctor employed by the California Division of Occupational Safety and Health. He decried the current ratio of one inspector for every 92,000 of the 18 million workers in California. That is a 10-fold difference in what the International Labor Organization recommends. Rapid developments in biotechnology make this weakened state oversight regime especially dangerous for workplace and public health and safety, he said.

Daniel Berman is the author of Death on the Job. He spoke about the demise of US workplace safety standards over the past 30 years. Business has been the political driving force of this weakening of governmental regulatory oversight for working people’s benefit, he said. This three-decade decline of workplace safety standards has also seen the melting away of health and safety officers in labor unions. Yet grassroots’ efforts are underway to counter the business offensive currently. An example is workers in immigrant communities who are organizing for safer workplace conditions now, Berman said.

Dina Padilla wrapped up the day’s proceedings. She is a candidate for California Insurance Commissioner on the Peace and Freedom Party ticket. Padilla spoke to the troubles of working people hurt on the job when they seek health care for their injuries. Her motive for elected political office, she said, is 21 years of battling for the rights of injured workers, including herself, who confront the power and wealth of insurance, chemical and drug companies, and business-friendly lawmakers.

Seth Sandronsky lives and writes in Sacramento. Email ssandronsky(at)yahoo.com.
http://www.populist.com/10.15.sandronsky.html
Add Your Comments
Support Independent Media
We are 100% volunteer and depend on your participation to sustain our efforts!