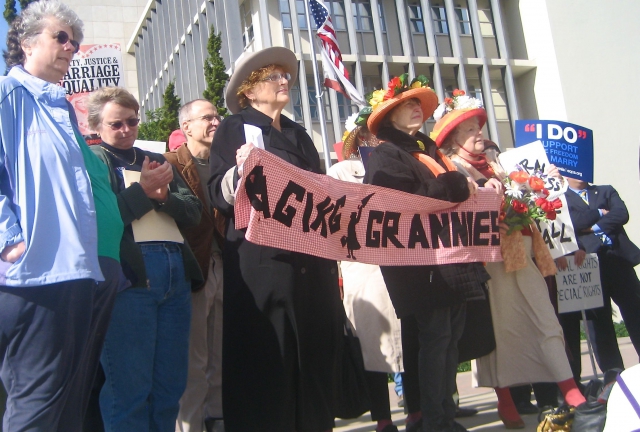 original image (2227x1504)
Judge Vaughn Walker released his decision and will allow same-sex marriages to resume in California but gay couples who were planning to get married in the next few days will not be able to do so quite yet. The judge is keeping gay marriages on hold in California until at least August 18 to allow supporters of prop 8 to give arguments.

Last week Judge Walker declared the Prop 8 ban unconstitutional but at the same time he issued a temporary stay of his ruling. Prop 8 supporters hoped that stay would remain for the duration of their appeal of his ruling which could take years.

Up and down the San Francisco peninsula the news spread quickly as activists for marriage equality hear the news. Opponents of prop 8 include gay activists and their straight allies. Ruth Robertson, a member of the Raging Grannies said, "I choose to fight for others who want to be able to marry because I value my own marriage. I'm happy that prop 8 was overturned and the stay was lifted, even with this one glitch. We are hopeful that it will be permanently lifted and the marriages of many waiting couples in California will be able to resume."

The Raging Grannies joined other marriage equality activists in celebration last week when Proposition 8 was overturned.
Add Your Comments
LATEST COMMENTS ABOUT THIS ARTICLE
Listed below are the latest comments about this post.
These comments are submitted anonymously by website visitors.