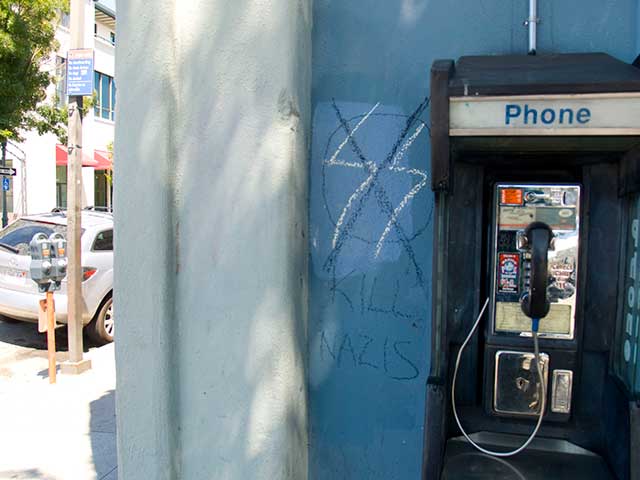 Encouragingly, someone used black to cross out the "SS" lightning bolt tag in yellow chalk on the wall next to the pay phone on Lincoln Street, and wrote “Kill Nazis” underneath. It is a good practice to cross out racist and nazi graffiti, even if it is written in chalk. Crossing out racist graffiti allows passerby to see that there is that element out there, and also opposition to it, whereas merely covering it up makes the problem invisible.

For those unfamiliar, "SS" refers to Nazi Germany's Schutzstaffel, the paramilitary force that ran the concentration camps (among other functions), and is a common Neo-Nazi symbol.

"Those who want to defend capitalism and white supremacy in Santa Cruz are getting organized: so should we." -some local anarchists

What is the "Secure Communities" Program?
http://www.indybay.org/newsitems/2010/08/09/18655758.php
http://bradleystuart.net
Add Your Comments
LATEST COMMENTS ABOUT THIS ARTICLE
Listed below are the latest comments about this post.
These comments are submitted anonymously by website visitors.