Add an Event
Newswire
Calendar
Features
Home
Donate
From the Open-Publishing Calendar
From the Open-Publishing Newswire
Indybay Feature
Publish to Newswire
Add an Event
Related Categories: Santa Cruz Indymedia | Immigrant Rights | Police State & Prisons
Reportback from Immigrants Rights March
by Santa Cruz Immigrant Solidarity (santacruzimmigrantsolidarity [at] gmail.com)
Friday Jul 30th, 2010 10:30 PM
While especially draconian sections of Arizona's SB 1070 were put on hold Wednesday, a diversity of Santa Cruz residents still turned out for a rally and march in protest as the proposal became law in our neighboring state. Perhaps it's because the stay is likely temporary, perhaps because July has been the deadliest month in years on the border, or maybe its because the Governator just vetoed overtime for California farm-workers. Maybe we wanted to demonstrate the power of solidarity between communities too often divided. 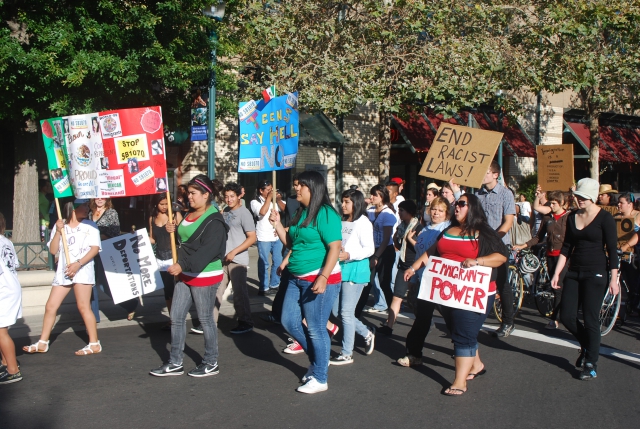 original image (2896x1944)
Yesterday, July 29 was the day that the infamous and racist Arizona state
bill 1070 went into effect. One week ago several of us met and decided it
was high time to begin organizing a protest in Santa Cruz for that day. One
week wasn't much time. We sent emails, made calls, posted a Facebook page,
talked to friends and activists around town and up the north coast. The
North Coast Teen Center in tiny Davenport organized a contingent of teen-age
latin@s who made brilliant signs in English and Spanish, and came up with
some of the most militant chants. Indeed, they headed the march from Depot
Park near the Santa Cruz Boardwalk, up the full length of Pacific Avenue
through downtown, ending at the big town clock. In all were about 120
marchers--local activists, youth, students, day laborers, families, recent
immigrants, recent emigrants... A diverse crowd in many ways. Local and
regional media walked the length of the march and interviewed many. Police
took pictures, but they made no attempt to interrupt the march.

Meetings of SCIS are held at the Resource Center for Non-Violence in SC.
The next meeting will be held on Friday, August 13 at 6pm.
RCNV address: 515 Broadway SC CA 95060

For further information about SCIS write to:
santacruzimmigrantsolidarity [at] gmail.com 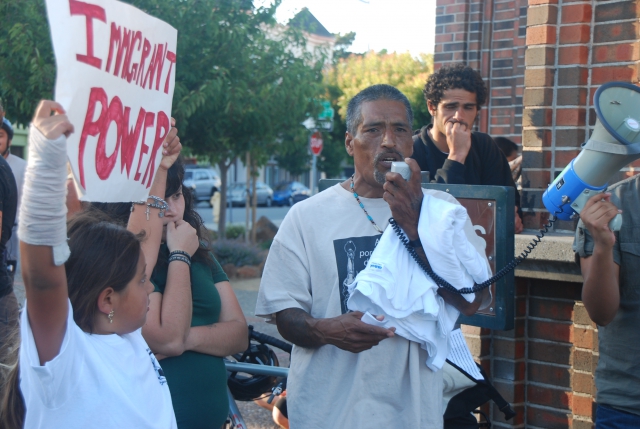 original image (2896x1944)
-Marciano Cruz is the director of the Liga de la Comunidad, a 1,000 member fútbol/soccer league in Santa Cruz. He is an immigrant from Oaxaca and long-time community organizer in Santa Cruz. He is also a staff member of
the Resource Center for Non-Violence.
§Griselda & Tani
by Santa Cruz Immigrant Solidarity Friday Jul 30th, 2010 10:30 PM 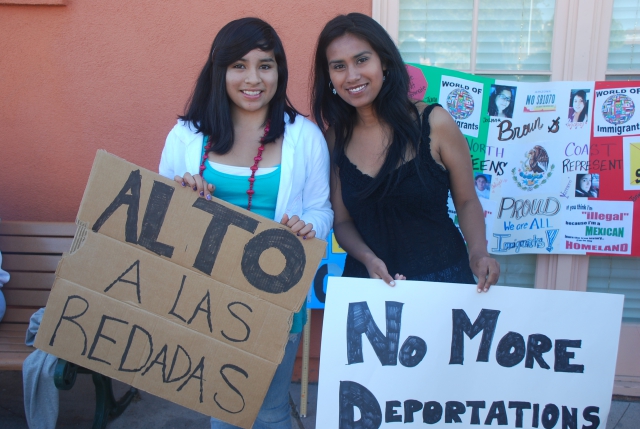 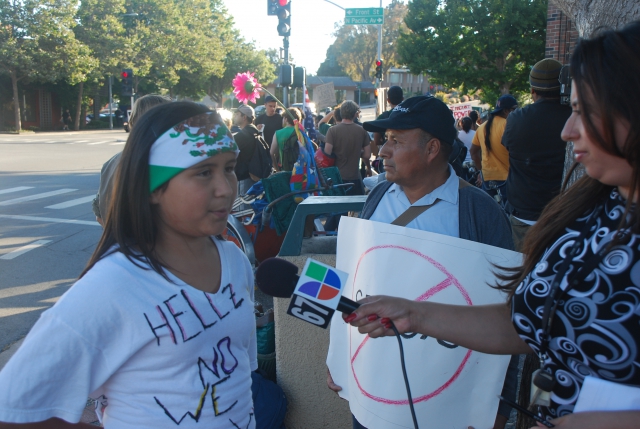 original image (2896x1944)
Joana Rodriguez is a 13 year-old teen from the North Coast Teen Center in Davenport. Adriana Frederick of Univision interviewed her.
Add Your Comments
Support Independent Media
We are 100% volunteer and depend on your participation to sustain our efforts!