Conspiracy Tour! Learn about AETA, Grand Juries and the RNC 8

The Scott and Carrie Support Committee is excited to be teaming up with the RNC 8 Defense Committee and friends to bring The Conspiracy to Santa Cruz! Featuring presentations about both of these cases and upcoming trials, as well as information on AETA, grand jury resistance, dealing with state repression and more, this will be a roadshow to remember even before you read about it in your FBI file. 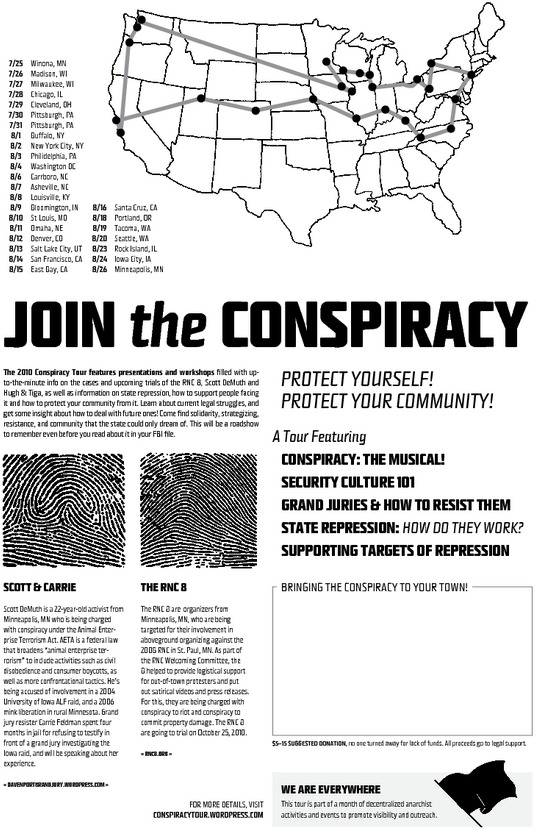 
* Tour to Raise Support Has the State Up in Arms *

The State of Minnesota alleges that organizing a convergence space for protesters to have meetings, eat free meals, and check teh interwebs (on computers that an FBI informant helpfully set up!) makes the RNC 8 guilty of conspiracy. The Federal government claims that Scott DeMuth’s writings and associations suggest that he is an anarchist and therefore a domestic terrorist, making him guilty of conspiracy under the Animal Enterprise Terrorism Act.

We say organizing resistance to state repression isn’t conspiracy. It’s survival. We say living our lives according to our principles isn’t terrorism. It’s our right. We say we’ll continue organizing no matter how much the state tries to destroy us and our communities.

So if this is conspiracy, we say to you...Join the Conspiracy!

It’s been alleged that the Tour will include a musical puppet show, a scintillating presentation on the charges the activists are facing, and various (some would say nefarious) ways you can join the Conspiracy to support targets of state repression. In addition to the usual perks of joining a conspiracy, co-conspirators will be learning ways to strengthen and protect their communities from future incidences of state repression. You know, just in case.

Come find solidarity, strategizing, resistance, and community that the state could only dream of! This will be a roadshow to remember even before you read about it in your FBI file.

Find out more about the Tour: http://conspiracytour.wordpress.com.
Questions? Wanna help out? Hit us up at midwestconspiracy(A)gmail.com.


* About the RNC 8 *
The RNC 8--Max Specktor (who will be speaking on the West Coast stops of the tour), Erik Oseland, Eryn Trimmer, Garret Fitzgerald, Luce Guillén-Givins, Monica Bicking, Nathanael Secor, and Rob Czernik--were preemptively arrested in a series of raids by heavily armed SWAT teams and other targeted arrests on the weekend before the Republican National Convention in 2008. The criminal complaints are based on the allegations of confidential reliable informants and an undercover Ramsey County Sheriff’s deputy, who infiltrated the RNC Welcoming Committee and conducted surveillance on the activists for about a year. Ramsey County Attorney Susan Gaertner initially slapped them with "terrorism" enhancements in the first known use of Minnesota's version of the PATRIOT Act. After a successful pressure campaign against Gaertner's gubernatorial bid, she dismissed the terrorism enhancement charges. The 8 still face felony charges of conspiracy to commit riot in the 2nd degree and conspiracy to commit criminal damage to property in the 1st degree. Their joint trial will begin on October 25, 2010 and could last up to two months. More info at http://rnc8.org.

* About Scott DeMuth *
In November 2009, Scott DeMuth and Carrie Feldman were subpoenaed to a federal grand jury in Iowa investigating a 2004 Animal Liberation Front raid at the University of Iowa. Though they had no information about the incident, they both refused to cooperate with the grand jury on principle and were jailed for civil contempt. Carrie was held for four months before being released, and will be speaking about her experience on this tour. Two days after being jailed, Scott was indicted for conspiracy under the Animal Enterprise Terrorism Act. He has been released with conditions pending trial and has been re-indicted twice in response to his attorneys' motions to dismiss. In March 2010, the Utah house of well-known animal rights activist and former political prisoner Peter Young was raided on a federal search warrant from Iowa. The raid happened only days before Carrie's release and lists Scott and others by name. More info at http://davenportgrandjury.wordpress.com.

This tour is part of the We Are Everywhere campaign, a month of decentralized anarchist activities and events to promote visibility and outreach in August 2010.

Looking forward to seeing you there!
END_OF_DOCUMENT_TOKEN_TO_BE_REPLACED
Add Your Comments
Comments (Hide Comments)
§Ashamed
by Rodent
Why do they cover their faces with bandanas? Are they ashamed of their cause?
Add a Comment
Support Independent Media
We are 100% volunteer and depend on your participation to sustain our efforts!