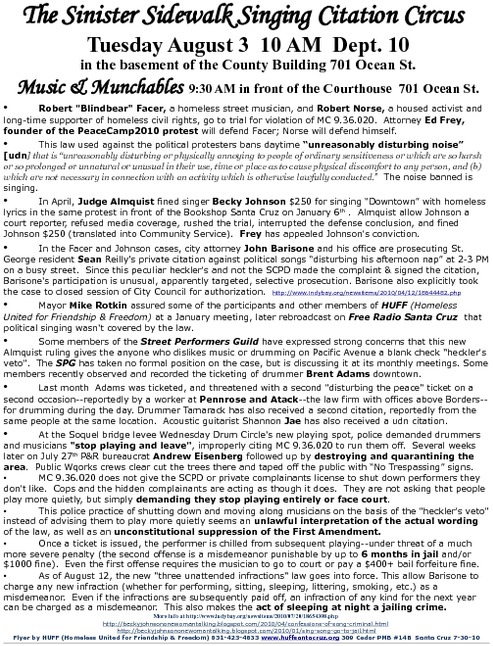 Tuesday August 3 10 AM Dept. 10
in the basement of the County Building 701 Ocean St.
Music & Munchables 9:30 AM in front of the Courthouse 701 Ocean St.
Robert "Blindbear" Facer, a homeless street musician, and Robert Norse, a housed activist and long-time supporter of homeless civil rights, go to trial for violation of MC 9.36.020. Attorney Ed Frey, founder of the PeaceCamp2010 protest will defend Facer; Norse will defend himself.

This law used against the political protesters bans daytime “unreasonably disturbing noise” [udn] that is “unreasonably disturbing or physically annoying to people of ordinary sensitiveness or which are so harsh or so prolonged or unnatural or unusual in their use, time or place as to cause physical discomfort to any person, and (b) which are not necessary in connection with an activity which is otherwise lawfully conducted.” The noise banned is singing.
§Same Old Song: Trial Continued Until September
by Robert Norse Tuesday Aug 3rd, 2010 8:57 PM
The trial was postponed until early September because the Commissioner Baskett's court staff had failed to verify that their recording equipment was working.

Commissioner Baskett disrespectfully kept over a dozen people waiting for two hours in the process.

Baskett indicated she'd probably rule against our motion seeking to have the case dismissed because state law overrules the city ordinance and preempts the field. That motion will be argued when the afternoon trial resumes next month.

We estimate the City has spent thousands of dollars on briefs, court appearances, and the like so far. All in a case that involved rather standard sidewalk singing in a low-key homeless protest in front of the Bookshop Santa Cruz.

The key issue for me continues to be the City's abuse of the Unreasonably Disturbing Noise (UDN) ordinance in order to drive away musicians at the whim of a private complainant.

Drummer Brent Adams had his Unreasonably Disturbing Noise citation postponed for several weeks when he'll see if he can find an attorney to take the case.

PeaceCamp2010 resident, drummer, and feather-hatted activist Robert Facer was due to have a charge of "sitting within 14' of a phone booth" dismissed, according to an earlier statement from Baskett in the afternoon. The charge was the final chapter of the day in the harassment march forced on the Drum Circle when it was driven away from the Elm St. Parking Lot several months ago.
§Trial to Resume September 2nd 1:30 PM Dept. 10
by Robert Norse Tuesday Aug 3rd, 2010 9:06 PM
The Singsong Trial will resume at 1:30 PM on September 2nd.

Robert Facer's "sinister sitting" citation was not dismissed, according to a recent e-mail from PeaceCamp2010. Rather it was "continued" until 10 AM on September 2nd.

Another example of Commissioner Baskett's saying one thing and doing another. (She advised us in court that she'd be dismissing it in the afternoon; advised us we could have a continuance if we needed it because of the witness problems she'd created by delaying the trial, but then held us all for an hour and a half until she finally agreed to do what she said---after we'd huddled with the City Attorney to force the issue.)
Add Your Comments

§Dialogue Between Sean Reilly and Robert Norse
by Robert Norse (and Sean Reilly)
Monday Aug 16th, 2010 2:48 PM
I repost here what I just read today on indybay. Sorry I didn't see it before. I had previously left two messages on Sean's answering machine, so he has my number, but hasn't chosen to contact me. I hope he will.


The Truth Is......
by Sean Reilly
Wednesday Aug 4th, 2010 6:31 PM
Robert- you should know that I am not "a light day sleeper" as you stated, nor did I leave the window open on 1-6-10. This all came out at Becky's trial. What also came out and is the truth is I had my window closed, my air conditioner turned on and my television turned on (on low) -all in an attempt to drown out the ridiculously loud singing/music that had gone on for several hours before I finally called the police. I also know you know that I work nights 6-7pm until 4-5am, six days a week (that's why I was trying to sleep during the day), as this too came out in Becky's trial. I have no problem with you using my name and discussing me in a forum such as this however I do insist you stick to the truth and the facts at hand- Many of which I'm certain you're well aware of. You really don't need to resort to half-truths to make your point.

During Becky Johnson's trial, I was out of the room for some of your testimony. As Judge Almquist did not allow us to record the proceedings, I had to rely on second-hand information. I accept your account that you had the window closed, your air conditioner turned on, and your television turned on low. And I apologize for any misimpressions here. I do have, to be honest, a different picture of what went on that afternoon that you did.

I would ask you, for instance, Are you still claiming that our singing went on since 11 AM, as you claimed in Johnson's trial?

At that trial you acknowledged that you made no attempt to let us know that anything going on under your window was disturbing you. I appreciated your honesty here. But don't you think it's unrealistic to expect us to anticipate your needs? We had performed and petitioned many times in that spot without any complaints from you.

And you told me afterwards that you regretted the situation, which I also appreciated. As well as the fact that you yourself had been homeless and said you had nothing against homeless protests.

You said further that had you known that Officer Schonfeld had misinformed you, you wouldn't have filed a citation. Shonfeld knew (and the audio tapes document) that (a) we'd stopped singing when she interrupted, (b) that we never started again & (c) that Johnson was trying to find out how softly we needed to sing to be legal. Apparently annoyed that we kept pressing her to give us some idea of how loudly we were allowed to sing, she misinformed you that you had to write out a citation to get us to sing more quietly.

As I said to you after one of the other hearings, letting us know of your concerns would be the best way to get mutual cooperation. It's possible there still would have been problems, but with better communication, that would have been and will be less likely.

You know that your window is directly above the City's "Exemption Zone" in front of the Bookshop Santa Cruz and so a frequent spot for protest and song. Involving police and the city attorney in this matter, in my view, tends to muddy the issue considerably.

If you are sincere in your claim that you this isn't politically directed against the protest--concerned with homeless deaths in 2009--I'd encourage you to consider again dealing with this matter more directly instead of serving the city attorney and police department's interest--which does have an axe to grind in this matter.

I think this matter may have a large element of misunderstanding and miscommunication in it. But I also believe that police are regularly misusing the Unreasonably Disturbing Noise ordinance to drive musicians away rather than ask them, as they should, to perform or sing more quietly.

We were able to sing and petition in the late Spring apparently able to both protest and not cause unreasonably disturb you or anyone else in the area. I would prefer to continue on this path, rather than proceed through a protracted court battle. Please feel free to call me (423-4833).

Assuming your sincerity on the homeless rights issue, if you have no interest in interfering with protest activity, I think an out-of-court resolution would be a good thing.
Add a Comment
Support Independent Media
We are 100% volunteer and depend on your participation to sustain our efforts!