Add an Event
Newswire
Calendar
Features
Home
Donate
From the Open-Publishing Calendar
From the Open-Publishing Newswire
Indybay Feature
Publish to Newswire
Add an Event
Related Categories: San Francisco | Immigrant Rights | Police State & Prisons
Saying No to 1070
by Felix (felix60 [at] hotmail.com)
Friday Jul 30th, 2010 9:19 AM
Pictures from protest and speak out in the Mission against 1070 and attacks on immigrants 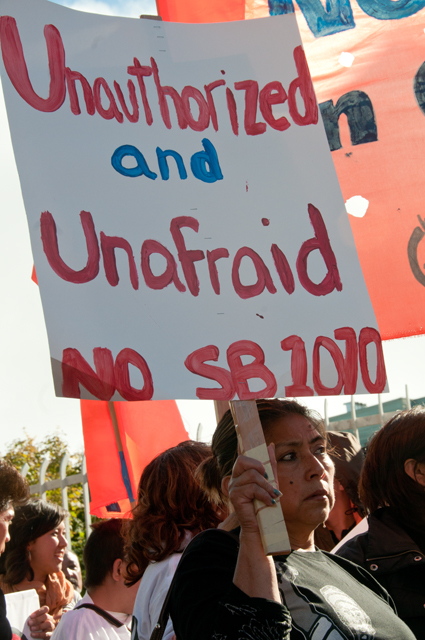 Protests took place on July 29 throughout Arizona, and around the U.S. and Mexico, against attacks on immigrants. These protests are happening as Arizona's fascist law, SB1070, goes into effect. 300 people demonstrated and spoke out at 24th and Mission in San Francisco. There were also actions in the Fruitvale in Oakland and other cities throughout the Bay Area.

The current issue of Revolution features substantial and timely analysis, background, and orientation for exposing and opposing the system’s fascist attacks on immigrants (http://revcom.us)

Check out the video clip "Bob Avakian, 'Why do people come here from all over the world?'" from Avakian's historic filmed talk, Revolution: Why It’s Necessary, Why It’s Possible, What It’s All About. The clip is available in English at http://www.youtube.com/watch?v=nDsRQyhKPfA and in Spanish at http://www.youtube.com/watch?v=abg4QCw8tLc
http://revcom.us
§Rally
by Felix Friday Jul 30th, 2010 9:19 AM 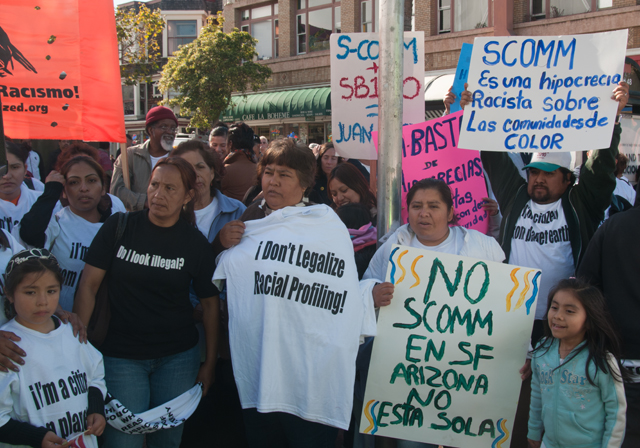 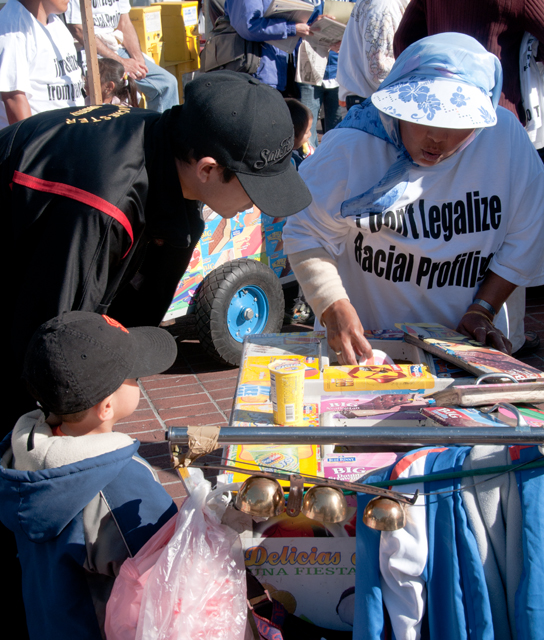 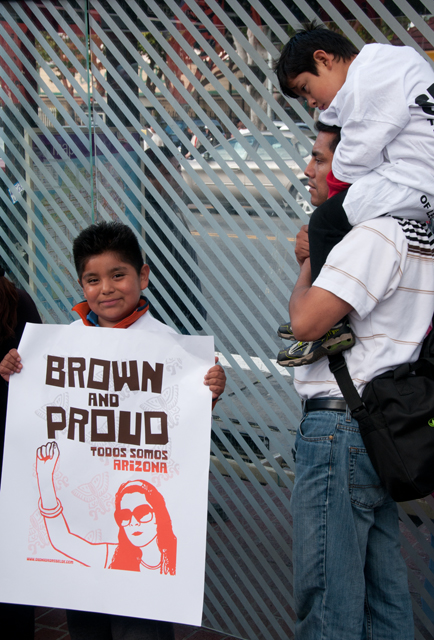 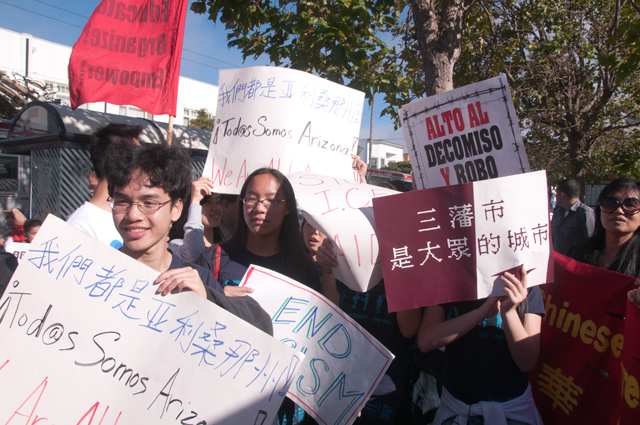 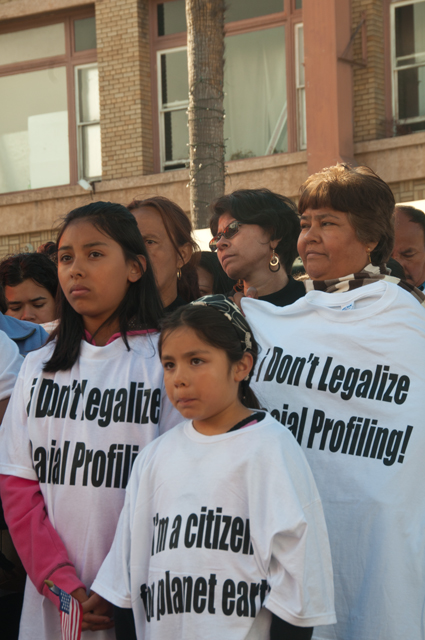 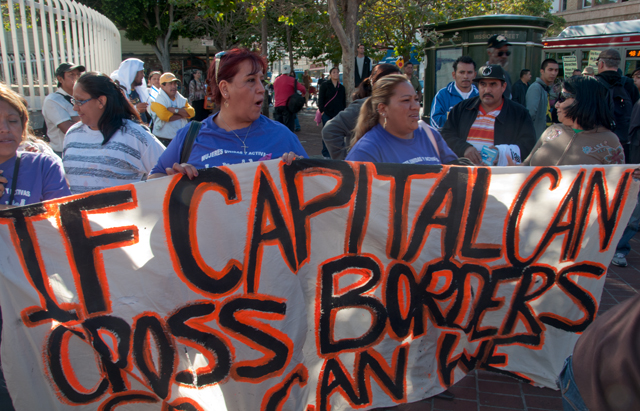 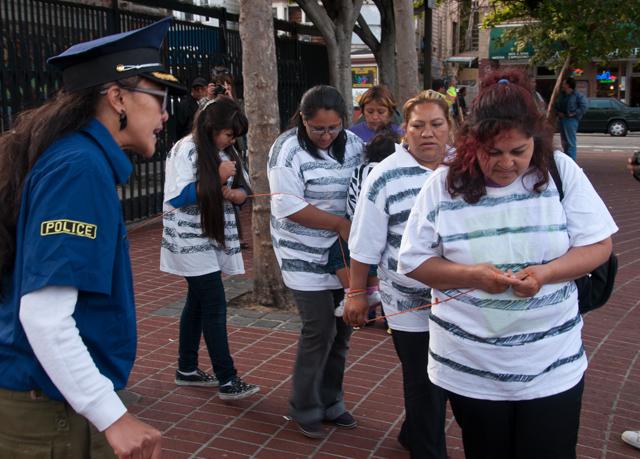 §So that's Bob
by bob is boring
Friday Jul 30th, 2010 10:25 AM
So this is your leader, the famous Bob. And you link to that clip. That's pathetic.
Add a Comment
§Boring?
by Bill Carpenter
(wcarpent [at] ccsf.edu) Friday Jul 30th, 2010 11:13 AM
Hey, "Bob is boring," that's a rather 'nothing' comment. If he's boring, why not say why? He's got nothing new to say? Wrong in some points? Which points? So-and-so is not boring because..., whereas Bob... A llittle content, please! ;-)
Add a Comment
§picture perfect gatherings
by konsider
Saturday Jul 31st, 2010 2:07 AM
Sadly, many apparently feel the issue of immigrant suppression is no longer as significant because the Arizona law wasn't put into effect. Then you have organizations like the RCP who take the fire out of demonstrating. Together, as in the instance of the SF protest on Thursday, you get ineffectual gatherings of small amounts of people basiclly standing there watching each other cry, frustrated and helpless.

I am not blaming those who turned out -- not at all -- rather I am blaming, what basically amounts to as, an ineffective organizational banality, that I think reinforces apathy instead of raises awareness. I feel that we all need to take active responsibility rather than shouting slogans provided from speeches by chairman Avakian, and then looking at photos of it the next day on the internet, somehow making us feel good that "we're involved."

Add a Comment
§Presenting the next big media distraction; AZ SB 1070
by Anti NAFTA/WTO H.R. 4759 ignored by "pros"
Saturday Jul 31st, 2010 3:13 PM
As a conspiracy theorist, my view on S.B. 1070 is that it is just another distraction set up to divide people, and also to derail activists from working on more serious issues, such as the needed nullification and repeal of NAFTA/WTO free trade agreements that still remain the source of the poverty and inequality in Mexico that in turn feeds the undocumented immigration.

Getting people all worked up over very little is something that the professional activists from neoliberals to communists are very skilled at. For people with a better grasp on reality, it becomes clear that any new law like S.B. 1070 will be subject to the same forces of physics and nature that prevent all the other scary laws on the books from actually being enforced.

Other than a few over the top knuckleheads like Maricopa County's Sheriff Joe Arpiao, does anyone really seriously think that the police in every town and city of AZ will be pulling over Mexicans and demanding their immigration documents? One would assume that the valid driver's license that ANY driver (native born or immigrant) must show cops upon being pulled over would be considered reasonable proof of legal status? For those who do not drive, being pulled over while a pedestrian or bicycle rider usually also results in being asked to show some form of a state ID card, thus also providing proof of legal status.

Considering that the population of AZ is at least 25% Mexican in most regions, we're talking about alot of police searches for alot of people. Though i don't normally side with the police, this SB 1070 is actually less fair to the police than anyone else. The provisions of SB1070 allow(ed)? groups or individuals to sue their local police depts. if they feel that SB1070 is not enforced. Then on the other hand, any form of racial profiling to enforce SB 1070 would result in additional lawsuits from civil rights groups. That means the net result of S.B. 1070 will be taking money away from local communities by attacking police from both political extremes. Of course some lawyers will be making bank off of S.B. 1070, resulting in most police eventually ignoring it completely.

Expecting local police to solve the nations's increasing population of undocumented immigrants is unrealistic and unfair to the police. Especially when the self educated folks who were mostly on the sidelines of SB 1070 debates understand that the continuous source of undocumented immigration is inequality caused by NAFTA/WTO free trade policies. We know that until NAFTA/WTO is repealed and nullified, the inequality and poverty in Mexico will only get worse, and that no border wall, SB 1070, national ID card (another Democrat idea!) or amnesty for 12 million undocumented workers will serve to make things better.

In nature the principle of "Occam's razor" shows that the simplest explanation is usually the most accurate, and that trying to perform impossible feats like patrolling miles of isolated border fences or expecting local police to know the immigration status of everyone in their district or continuously granting amnesty to more and more undocumented immigrants is missing the point. Since the source for most of the undocumented immigrants is poverty and inequality in Mexico as a result of NAFTA/WTO policies, the "Occam's razor" solution would be to simply repeal NAFTA/WTO, admit that we made a HUGE MISTAKE by allowing it to be passed to begin with and go from there. The predicted outcome after a few years would be for Mexicans to regain their autonomy and increase their capacity for self-governance, distancing themselves from the corrupt politicians in Mexico City D.F. and the predatory U.S. corporations that promote undocumented border crossings on radio ads in Mexico, luring people into dangerous jobs in meatpacking, CAFO feedlots, agribusinesses, etc...

Our beloved neoconservative and neoliberal politicans talk as if NAFTA/WTO was written in stone tablets and carried down from the mountain by a modern day Moses, and these free trade agreements are the direct message from GOD and none of us mortals better even try to challenge this.

Only Ron Paul and Dennis Kucinich have shown that outside of the mainstream neocon/neolib psuedo-debates on immigration that those on the fringes of the libertarian right and the socialist left there is alot of agreement about the pressing need to repeal and nullify NAFTA/WTO before embarking on more silly schemes in futile attempts to slow the influx of undocumented immigrants.

While corporate media was constantly talking about SB1070, this House Resolution 4759 went completely under the radar;

Call your congresscritters today and ask them to please co-sponsor this bill.

To provide for the withdrawal of the United States from the North American Free Trade Agreement.

IN THE HOUSE OF REPRESENTATIVES

To provide for the withdrawal of the United States from the North American Free Trade Agreement.

Be it enacted by the Senate and House of Representatives of the United States of America in Congress assembled,

SECTION 1. WITHDRAWAL OF THE UNITED STATES FROM THE NAFTA.

(a) Withdrawal of Approval- Notwithstanding any other provision of law, the approval of the NAFTA by the Congress provided for in section 101(a) of the North American Free Trade Agreement Implementation Act shall cease to be effective beginning on the date that is six months after the date of the enactment of this Act.

(b) Notification of Withdrawal- On the date of the enactment of this Act, the President shall provide to the Governments of Canada and Mexico written notice of withdrawal of the United States from the NAFTA in accordance with Article 2205 of the NAFTA.

(c) NAFTA Defined- In this section, the term `NAFTA' means the North American Free Trade Agreement entered into between the United States, Canada, and Mexico on December 17, 1992."

Of course both Paul and Kucinich were treated like stepchildren by their respective parties during the recent run-off elections for the Presidency, could you imagine these two at a debate instead of Obama and McCain? The two of them coming from opposing parties and voicing their agreement that NAFTA should be repealed would be scary stuff for the corporations who benefited the most from NAFTA policies..

Another issue; For the so-called "pro-immigrant" spokespeople, please cease and desist from repeating the neoliberal myth that somehow undocumented immigration is "good for U.S." because they are "doing the jobs that Americans do not want". These jobs we do not want include CAFO feedlots, slaughterhouses, meatpacking, plantation style agribusinesses and other industrial food corporations that are harmful to the ecosystem, workers and consumers, not to mention cruel to the animals involved. These industrial food corporations (Conagra, ADM, IBP, etc...) that employ so many undocumented workers have grown exponentially since the passage of NAFTA/WTO, and have replaced the small family farmers both here in U.S. and in Mexico. So keeping that food industrialization process going by making excuses for the undocumented workers and the corporations that exploit their labor isn't good for anyone!!

More reasons we can all agree that NAFTA needs to be repealed;

"The result of the NAFTA agriculture model has been dwindling farm incomes for small farmers in all three countries.

Mexican Farm Income: NAFTA-required changes have resulted in literally millions of Mexican peasant farmers leaving their small farms and their livelihoods and being forced to migrate. The land redistribution program established in the Mexican Constitution at the time of the Mexican Revolution was changed to meet NAFTA's foreign investor protection requirements-- meaning that, for the first time in 80, years small farmers could lose their land to bad debt. Projections range up to 15 million displaced Mexican small farmers because of NAFTA's agriculture provisions. At the start of NAFTA, more than one quarter of Mexican workers were employed in agricultural production. While overall population growth in Mexico over the past decade was 20%, rural population growth is now 6% while urban population growth is 44%, showing a trend of displaced farmers migrating to Mexico's cities, where unemployment rates are high, or to the north.