Add an Event
Newswire
Calendar
Features
Home
Donate
From the Open-Publishing Calendar
From the Open-Publishing Newswire
Indybay Feature
Related Categories: Santa Cruz Indymedia | Arts + Action | Health, Housing & Public Services | Police State & Prisons
City runs off Drum Circle again, cuts down trees and cements AREA CLOSED signs along levee
by Brent Adam
Thursday Jul 29th, 2010 2:44 AM
After finally finding a place to peaceably assemble to play drums together, the 10 year drum circle is harassed again as the city cuts down several trees and turns an area along the river walk into a no trespassing zone. Shameful!!
What used to be referred to as the Santa Cruz Farmer's Market Drum Circle has been forced to bounce from spot to spot since they were crowded out by the recent expansion of the market last spring. The Drum Circle has had its battles with the police over the past couple of years, it had been fenced closed week after week but the drummers would remove it and continue to play as they have for 10 years. Eventually, folks (Jack & Wes Modes) had been arrested as they drummed in solidarity with the regulars but the weekly ritual remained and maintained this non-violent creative community activity. I had drummed with them for many years and have acted as an advocate for them several times as a liaison with the market management, police sgt. Mike Harms and the drum circle. I helped create the list of guidelines that hung on the trees for the past year.


I admit, I haven't been drumming with the drum circle since they've begun to inhabit the spot along the river levee at Soquel Ave, beside the bank and across the street from CVS. I do check up on it from time to time and I've been getting weekly reports. The police have been unobtrusive and kind. There have been no warnings or complaints or problems from what I've heard. If there has been a problem at all it is that some folks have been camping there full time. But now that there is Peace Camp 2010 at the county building just a quarter mile up the river the city has taken an inhospitable and highly oppressive maneuver and have cut down all of the trees in the area where the weekly drum circle had been enjoying its new home. Two signs had been cemented into the ground reading "Demonstration Garden AREA CLOSED KEEP OUT scmc 13.04.010:13.04.01" Both of these signs have since been removed.

On Wednesday July 28, the drummers had migrated down river to the area of the levee path adjacent to the parking lot at the Yoga Center. They were happy, sober, non-violent and friendly as ever. The drumming was good too.

When will Santa Cruz as a city and community finally allow these good people a neutral spot where they may play drums together peaceably for a 4 hour block just once each week? I think we can do that. 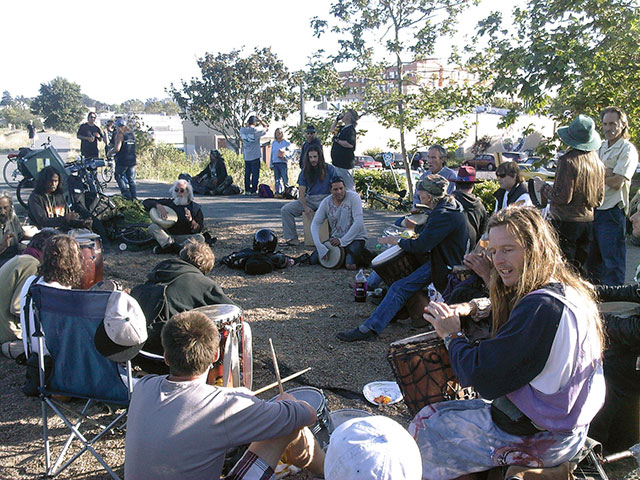 July 21, 2010. Santa Cruz River Levee at Soquel Avenue Bridge
http://bradleystuart.net
Add Your Comments
LATEST COMMENTS ABOUT THIS ARTICLE
Listed below are the latest comments about this post.
These comments are submitted anonymously by website visitors.