by ~Bradley (bradley [at] riseup.net)
On July 20th, Robert "Blindbear" Facer, a homeless street musician, and Robert Norse, a housed activist and long-time supporter of homeless civil rights, had their trial continued until August 3rd. On January 6th, they were issued a $445 citation for an alleged violation of MC 9.36.020, the city's ordinance against "unreasonably disturbing noises," during a demonstration against war and occupation abroad and the local criminalization of poverty, within a "free speech zone" outside of Bookshop Santa Cruz on the Pacific Avenue sidewalk. 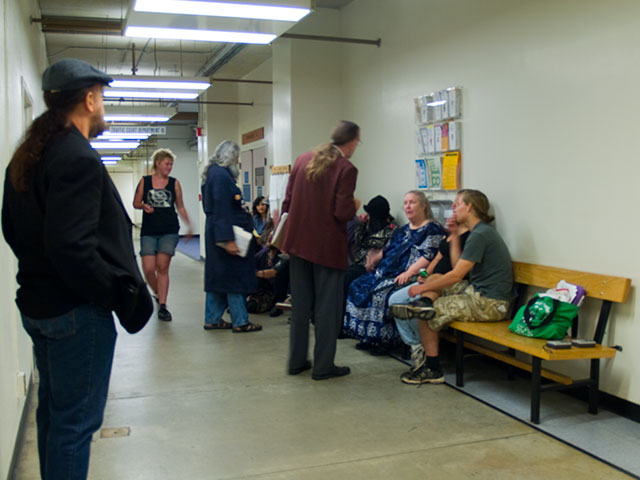 The police allegedly arrived at the January 6th demonstration to issue citations based on a "citizen's complaint" from Sean Reilly, a resident in the nearby St. George apartments. He complained because he was trying to sleep, at 2:30pm, on a Wednesday. Sean was in court on July 20th and presumably ready to testify. SCPD officer Lauren Schonfield, who issued the citations, also appeared in court.

Regarding the incident, Robert Norse wrote on Indybay.org, "The absurd contention that First Amendment activity on the street has to be at a low enough volume to not awaken a light day sleeper on the second floor with an open window on a weekday at 2:30 PM on Santa Cruz's busiest street, is, of course, absurd. This whole prosecution (especially with the unusual involvement of the City Attorney) smacks of a desire to maintain an illegal 'move along' policy at the discretion of the police and nearby businesses and residents. [This is] not what the law and the Constitution allow."

The trial is being heard before Commissioner Kim Baskett in Department 10, located in the basement of the 5-story county building in Santa Cruz. Robert Facer is being represented by attorney Ed Frey, with legal support from Ray Glock-Grueneich. Robert Norse is defending himself.

Ed Frey presented a motion (half page) to the court. This apparently caught both the city attorney and judge by surprise. The city attorney requested, and was granted, 10 days to review the motion. The trial is scheduled to resume on Tuesday, August 3rd at 10pm. Commissioner Baskett explained that the court will hear the case until 11:45am, if needed, and then continue the next morning.

"No person shall make, cause, suffer or permit to be made any noises or sounds (a) which are unreasonably disturbing or physically annoying to people of ordinary sensitiveness or which are so harsh or so prolonged or unnatural or unusual in their use, time or place as to cause physical discomfort to any person, and (b) which are not necessary in connection with an activity which is otherwise lawfully conducted. As used in this section, “lawfully conducted activities” shall include, but not be limited to, any and all activities conducted by the city for public health, safety or welfare purposes."

Since when did "war and occupation" come into play??

Robert has NEVER mentioned this before.

Robert and Becky have supplied the lyrics to their songs and none of them mention "war and occupation".

The arrest report and the follow up declarations never mentioned a protest about "war and occupation".

Becky has never mentioned the protest included "war and occupation".

In Becky's court case she made no mention of "war and occupation".

I smell a change in tactic.
Add a Comment
§No, follow the link from "demonstration"
by Stop Wars
Wednesday January 06
Holiday with the HUFFsters: Renewed Vigil Against Two Wars
http://www.indybay.org/newsitems/2010/01/05/18634377.php
Add a Comment
§Commentary
by Robert Norse
Thanks, Bradley, for covering this story.

Thanks to PeaceCamp2010 for showing up in solidarity and support.

This prosecution is in the same family as that against Wes Modes for "parading without a permit" (See Bradley's companion story at http://www.indybay.org/newsitems/2010/07/18/18654218.php) as well as Micah Posner's "bike ride on King Street without a permit" [http://www.santacruzsentinel.com/localnews/ci_12304255 ]. This has included recent attacks on the Drum Circle (formerly at Farmer's Market, now at the levy near the Soquel Bridge], the Sub Rosa Cafe, and the Guerrilla Drive-In.

It's also linked to the SCPD crackdown on street musicians generally using threats of citation and arrest under the Unreasonably Disturbing Noise [UDN] ordinance and the Disturbing the Peace penal code. This is part of the new crackdown on poor and counterculture folks downtown signaled by the "three unattended infractions and any thereafter can be misdemeanors" law that gears up the war against sleepers as well as other laws like the "show your ID before you get a room" requirement and the landlord rental inspection requirement currently being debated.

Becky Johnson's rushed trial for "sinister sidewalk singing" at mid-day where Judge Almquist twisted law and common sense to find her guilty can be found at http://beckyjohnsononewomantalking.blogspot.com/2010/04/confessions-of-song-criminal.html

The Street Performers Guild has been discussing legal and street responses to the misuse of MC 6.36.020, the UDN ordinance. Downtown cops under Sgt. Harms are using it as a pretext to shut down or move along (rather than quiet down) drummers, singers, and guitarists on Pacific Avenue. "Big Drum" Brent and Tamorack, two drummers, face $445 citations which go to court in the near future. Shannon Jae reports getting both a UDN cite and a "Move-Along-Every-Hour" in the so-called "Free Speech" zone in front of the Bookshop Santa Cruz--the same area where I and 3 others were cited for singing "Downtown, the Homeless View" back in January.

The continuance ordered by Commissioner Baskett in our case shows the court and the city on the defensive. Baskett has had no problems with the constitutionality of the UDN in prior prosecutions, taking police word as gospel. Attorney Ed Frey and Legal Worker Ray Glock-Grueneich's brief argues that state's Disturbing the Peace law takes precedence over the city's UDN ordinance. This would mean we have to be tried under the state law, which allows us a Public Defender, a jury trial, and a higher standard of proof (that our speech caused an imminent clear and present danger).

Police policy itself has been evasive and contradictory. Sgt. Harms, long the downtown daytme beat sergeant, declined to clarify what the volume standard was for the ordinance. He also claimed for many months that the law did not allow police officers to directly cite victims under UDN. Challenged repeatedly to show the specific law or policy with some written documentation, he reverted to the argument that it's just "police discretion".

The issue in our trial is whether private citizen heckler's (anonymous until taken to court) can shut down music or political speech of their choosing on Pacific Avenue by claiming it is Unreasonably Disturbing Noise. This, when the police, city attorney, and the law refuse to give any understandable standard for what would be a legal volume.

Of course, if the city attorney doesn't mind dumping more than $125,000 of city money into upholding the Mayor's right to exclude critics from city council for a silent brief "don't act like a Nazi salute", it's not surprising they're using similar repressive tactics on the street. [See http://www.indybay.org/newsitems/2010/06/28/18652079.php ]
Add a Comment
§The Truth Is......
by Sean Reilly
Robert- you should know that I am not "a light day sleeper" as you stated, nor did I leave the window open on 1-6-10. This all came out at Becky's trial. What also came out and is the truth is I had my window closed, my air conditioner turned on and my television turned on (on low) -all in an attempt to drown out the ridiculously loud singing/music that had gone on for several hours before I finally called the police. I also know you know that I work nights 6-7pm until 4-5am, six days a week (that's why I was trying to sleep during the day), as this too came out in Becky's trial. I have no problem with you using my name and discussing me in a forum such as this however I do insist you stick to the truth and the facts at hand- Many of which I'm certain you're well aware of. You really don't need to resort to half-truths to make your point.

During Becky Johnson's trial, I was out of the room for some of your testimony. As Judge Almquist did not allow us to record the proceedings, I had to rely on second-hand information. I accept your account that you had the window closed, your air conditioner turned on, and your television turned on low. And I apologize for any misimpressions here. I do have, to be honest, a different picture of what went on that afternoon that you did.

I would ask you, for instance, Are you still claiming that our singing went on since 11 AM, as you claimed in Johnson's trial?

At that trial you acknowledged that you made no attempt to let us know that anything going on under your window was disturbing you. I appreciated your honesty here. But don't you think it's unrealistic to expect us to anticipate your needs? We had performed and petitioned many times in that spot without any complaints from you.

And you told me afterwards that you regretted the situation, which I also appreciated. As well as the fact that you yourself had been homeless and said you had nothing against homeless protests.

You said further that had you known that Officer Schonfeld had misinformed you, you wouldn't have filed a citation. Shonfeld knew (and the audio tapes document) that (a) we'd stopped singing when she interrupted, (b) that we never started again & (c) that Johnson was trying to find out how softly we needed to sing to be legal. Apparently annoyed that we kept pressing her to give us some idea of how loudly we were allowed to sing, she misinformed you that you had to write out a citation to get us to sing more quietly.

As I said to you after one of the other hearings, letting us know of your concerns would be the best way to get mutual cooperation. It's possible there still would have been problems, but with better communication, that would have been and will be less likely.

You know that your window is directly above the City's "Exemption Zone" in front of the Bookshop Santa Cruz and so a frequent spot for protest and song. Involving police and the city attorney in this matter, in my view, tends to muddy the issue considerably.

If you are sincere in your claim that you this isn't politically directed against the protest--concerned with homeless deaths in 2009--I'd encourage you to consider again dealing with this matter more directly instead of serving the city attorney and police department's interest--which does have an axe to grind in this matter.

I think this matter may have a large element of misunderstanding and miscommunication in it. But I also believe that police are regularly misusing the Unreasonably Disturbing Noise ordinance to drive musicians away rather than ask them, as they should, to perform or sing more quietly.

We were able to sing and petition in the late Spring apparently able to both protest and not cause unreasonably disturb you or anyone else in the area. I would prefer to continue on this path, rather than proceed through a protracted court battle. Please feel free to call me (423-4833).

Assuming your sincerity on the homeless rights issue, if you have no interest in interfering with protest activity, I think an out-of-court resolution would be a good thing.
Add a Comment
Support Independent Media
We are 100% volunteer and depend on your participation to sustain our efforts!