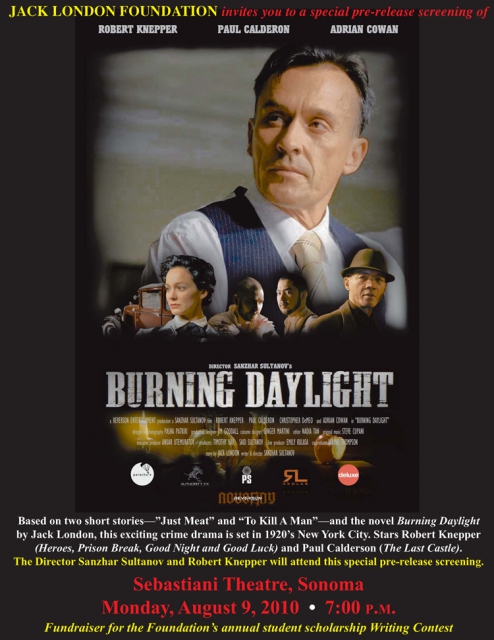 The Jack London Foundation is excited to announce a very special fundraising event: A pre-release movie screening of a thrilling full-length crime drama based on two riveting short stories and a novel by Jack London, the world-famous American author who lived in Sonoma County. On hand will be the star of Part III who plays Elam “Burning Daylight” Harnish, Robert Knepper, and the film's director, Sanzhar Sultanov, who will participate in a question-and-answer session directly following the movie. This special screening will take place on Monday, August 9, at 7:00 P.M. at the historic Sebastiani Theatre in Sonoma. Worldwide release of the movie is scheduled for mid-September.

Set in 1920’s New York City, the film stars Robert Knepper (Heroes, Prison Break, Good Night and Good Luck) and Paul Calderon (The Last Castle). Based on “Just Meat”, “To Kill A Man”, and Burning Daylight, the movie is divided into three parts and examines “friendship and betrayal, courtesy and duplicity, morality and corruption, with no wolves, save for the human kind.” Part I depicts the lives of two low-life thieves enjoying a post-heist euphoria and a subtle, ever-increasing rivalry. Part II details a mind game between a manipulative, wealthy woman and a seemingly inane, destitute thief. Part III features a duel between a legendary, self-made, Klondike Gold millionaire with a heinous past and the masterminds of a Wall Street scam, yet all fall prey to a quietly sophisticated, calculating woman. Illustrating the social philosophy that “for one to win, the other must lose”, the trilogy weaves a moral tapestry on the human condition—the transient nature of vanity, the seductive qualities of money and fame, the pervasiveness of deception and corruption, the fleeting quality of earthly possessions, and the basic human instinct to survive.

Director Sultanov, who adapted London’s works for his feature film debut, reflects: “This is the beauty and genius of Jack London. He was an enlightened and visionary writer, who wrote about human behavior. . . . His stories are timeless because people haven’t changed.”

Pre-event tickets are available through the Jack London Foundation, a nonprofit educational corporation. If any tickets remain, they will be sold at the door. Tickets are $25 for the general public, $10 for students (18 and under). Net proceeds benefit the Foundation’s annual student scholarship Writing Contest.

For more details about the event, visit the Foundation’s Web site: http://www.jacklondonfdn.org

To view the official movie trailer, you can surf to: http://www.reverson.ca/documents/BurningDaylightTrailerOfficial.mpg

END_OF_DOCUMENT_TOKEN_TO_BE_REPLACED
Added to the calendar on Fri, Jul 16, 2010 1:16PM
Related Categories: North Bay / Marin
Add Your Comments
Support Independent Media
We are 100% volunteer and depend on your participation to sustain our efforts!