City attorney John Barisone has taken up a heckler's complaint about political songs disturbing his sleep at 2-3 PM in the afternoon. See http://beckyjohnsononewomantalking.blogspot.com/2010/01/sing-song-go-to-jail.html

Judge Almquist did not allow Johnson a court reporter, rushed the trial, interrupted the defense conclusion, and fined Johnson $250 (translated into Community Service). Attorney Ed Frey is appealing the conviction.

Some members of the Street Performers Guild expressed strong concerns that this new Almquist ruling gives the anyone who dislikes music or drumming on Pacific Avenue a blank check "heckler's veto".

The lyrics to one of the offending songs "Downtown" can be found at http://beckyjohnsononewomantalking.blogspot.com/2010/01/downtown-music-by-petula-clark-lyrics.html

Barisone managed the prosecution at public expense under the Unreasonably Disturbing Noise law (MC 9.36.020) in spite of Mayor Rotkin's assurance to some of the participants that political singing wasn't covered by the law.

Last month drummer Brent Adams was ticketed, and threatened with a second "disturbing the peace" ticket on a subsequent occasion reportedly by a worker at Pennrose and Atack--the law firm with offices above Borders--for drumming during the day. Drummer Tamorack has also received a second citation, reportedly from the same location.

Wednesday Drum Circle participants, though largely undisturbed at their new location at Soquel and S. River St. next at the "levy triangle" next to the Soquel bridge, have reported police continue to demand drummers and musicians "stop playing and leave".

This misuses MC 9.36.020--the Unreasonably Disturbing Noise law--whose wording may require playing more quietly, but doesn't give officers license to shut down performers. This is being done under the pretext of "private person" or "citizen" complaints/arrests.

Police practice of shutting down and moving along musicians on the basis of the "heckler's veto" instead of advising them to play more quietly seems an unlawful interpretation of the actual wording of the law, as well as an unconstitutional suppression of the First Amendment.

Once a ticket is issued, the performer is chilled from subsequent playing--under threat of a much more severe penalty, and required to go to court or pay a $400+
fine.

A prior update covering much background in the case can be found at "Sinister Street Singers Trials Consolidated and Postponed Until July" (http://www.indybay.org/newsitems/2010/04/29/18646105.php)

As of August 12, the new "three unattended infractions" law goes into force. This allow the Barisone to arrest and charge any new infraction (whether about performing, sitting, sleeping, littering, smoking, etc.) as misdemeanor crimes punishable by up to 6 months in jail and $1000 fine.

Even if the infractions are subsequently paid off, any infraction of any kind for the next year can be charged as a misdemeanor.

More Sinister Sidewalk Singing Citation Trials
Tuesday July 20 9:30 AM Dept. 10
in the basement of the County Building 701 Ocean St.
Music & Munchables in front of the County Courthouse 701 Ocean St.
(Demo and Digestibles at 9:30 AM, Trial at 10 AM or shortly thereafter)
§More Sidewalk Singing Tickets Go To Trial
by HUFF (rnorse3 [at] hotmail.com) 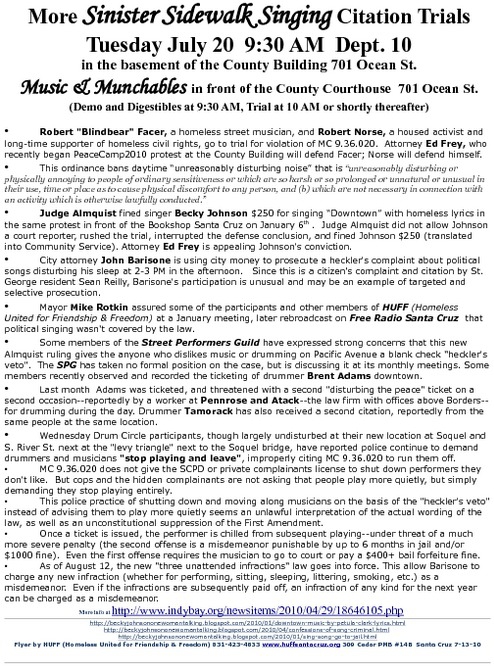 More Sinister Sidewalk Singing Citation Trials
Tuesday July 20 9:30 AM Dept. 10
in the basement of the County Building 701 Ocean St.
Music & Munchables in front of the County Courthouse 701 Ocean St.
(Demo and Digestibles at 9:30 AM, Trial at 10 AM or shortly thereafter)
Add Your Comments
Latest Comments
Listed below are the latest comments about this post.
These comments are submitted anonymously by website visitors.
TITLE
AUTHOR
DATE
misdemeanor is like a real crime
Yul Frey
TIME CORRECTION: 10 AM NOT 1:30 pm
Robert Norse
Support Independent Media
We are 100% volunteer and depend on your participation to sustain our efforts!