On July 8th, 2010, Mehserle was found guilty of involuntary manslaughter, but acquitted on the more serious charges of second-degree murder or voluntary manslaughter. The jury included eight women and four men. A white police officer killed a black man, yet no African-Americans served on the jury. The killing took place in Oakland, but the trail was moved out of Alameda County to Los Angeles.

It was announced that Mehserle will be sentenced on August 6th**. However, other reports suggest that sentencing may take place later, perhaps in September. Judge Robert Perry now has the discretion in sentencing to decide how to apply the findings of the jury.

** 65 years ago, on August 6th, 1945, the U.S. Military dropped a nuclear bomb on the city of Hiroshima, Japan. Three days later, on August 9th, the U.S. detonated a nuclear explosion over Nagasaki. 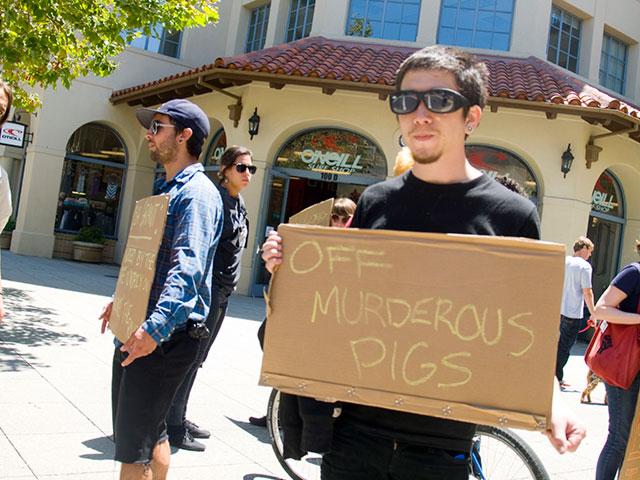 On July 9th, a demonstration was held on Pacific Avenue in downtown Santa Cruz against police murder and the unjust verdict in the trial of Johanes Mehserle. The demonstration, called for the night before, took place from 12pm until about 2:30. It brought out about two dozen demonstrators throughout that time who held signs and engaged pedestrians.

Even though the demonstration was only called for the night before, and there were no flyers around town, there was an absurd number of Santa Cruz police officers constantly surrounding the protest, as well as non-stop surveillance and zoom lens photography from the top of a building.

Friend affirmed that a number of officers surrounding the demonstration were receiving overtime pay, but didn't how many. He found it funny to point out to me that one of the officers standing there was "sipping on a latte."

I asked Friend about the two plain-clothed men on top of the building taking photos. He said that they were not police officers and that he did not know who they were. He suggested, however, that they might be property owners whose building was damaged on May 1st.

I speculate that it is more likely the two men on the roof who engaged in non-stop surveillance and zoom lens photography are FBI agents, rather than vigilante property owners.

For analysis of the verdict, protests in Oakland and around the U.S., and ongoing coverage of the Justice for Oscar Grant movement, see: 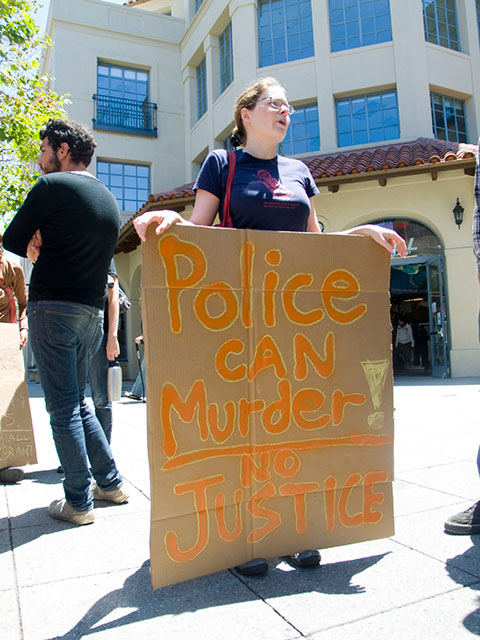 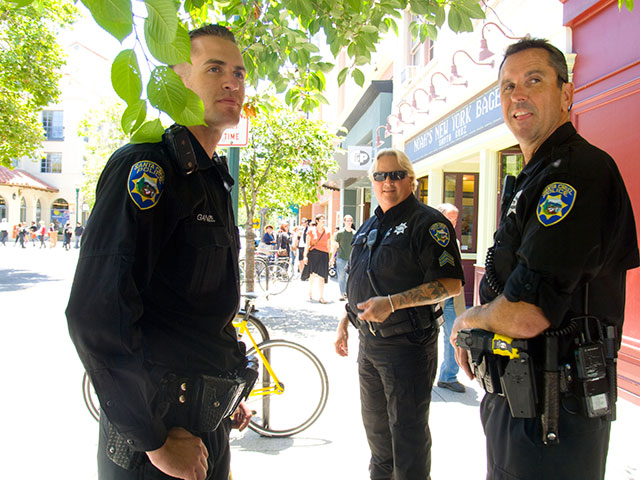 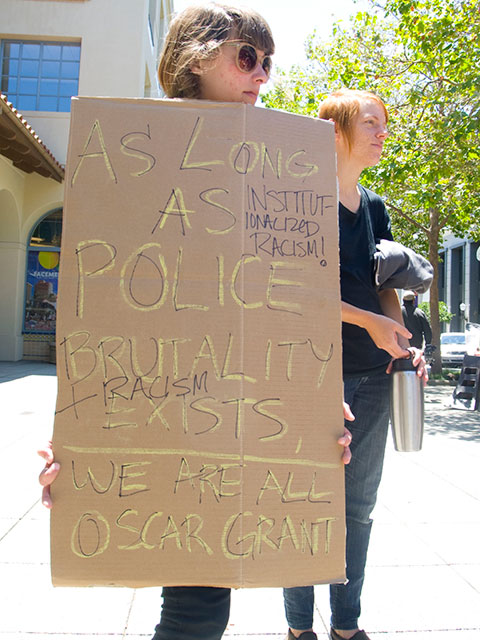 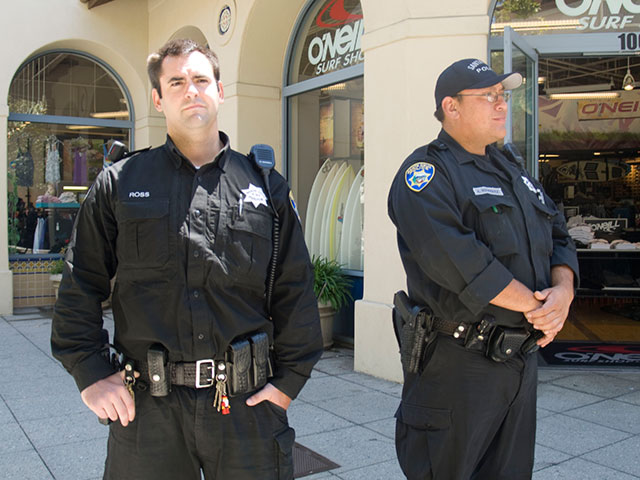 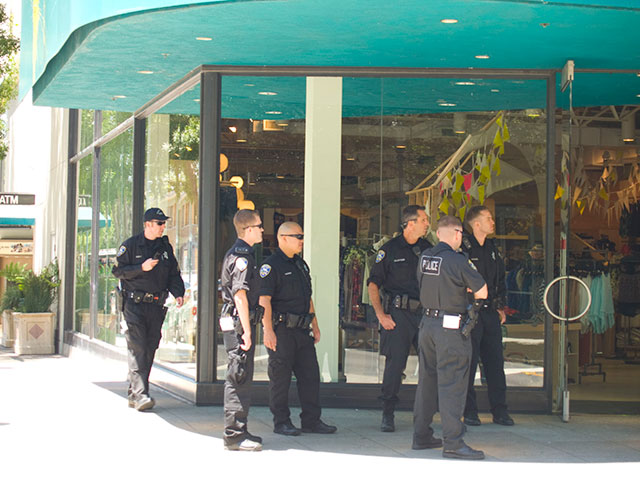 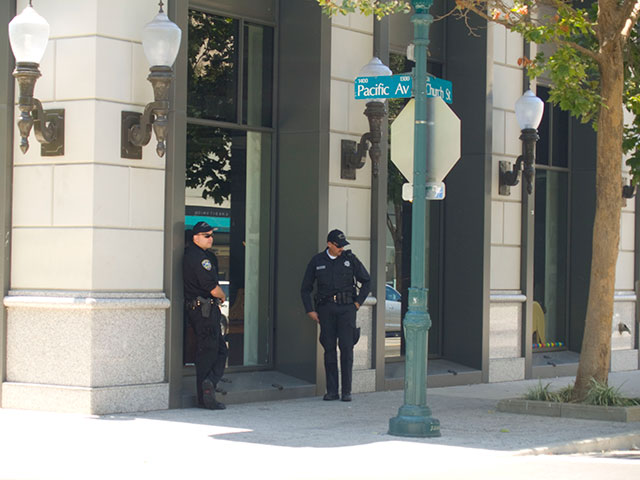 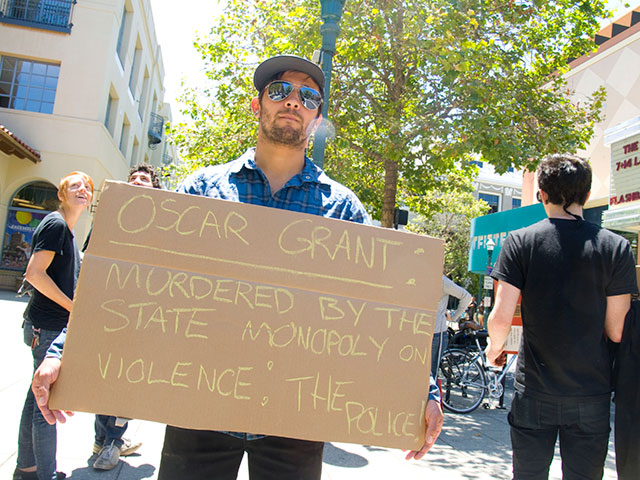 In the background, demonstrators look up at two men on a rooftop surveilling and photographing during the entire demonstration.
http://bradleystuart.net
§
by ~Bradley Sunday Jul 11th, 2010 2:56 PM 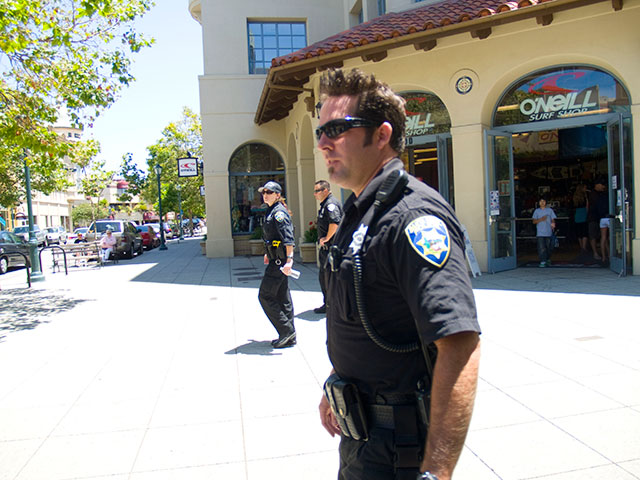 There were even more police surrounding the demonstration than the ones shown in the photos above. I counted at least 12 - 15 cops, depending on how you count police spokesman Zach Friend and the two men doing rooftop surveillance.
http://bradleystuart.net
§Cop Loving Disruptor
by ~Bradley Sunday Jul 11th, 2010 2:56 PM 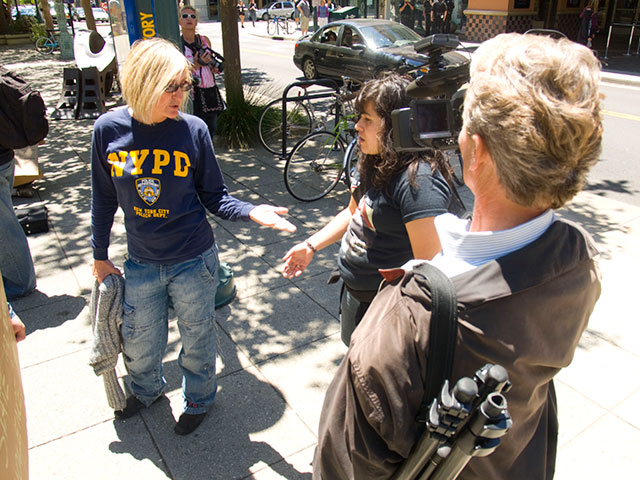 For numerous demonstrators, the corporate reporters, along with their video and cellphone cameras, were getting too close for comfort. But it was over-the-top when a lady wearing an NYPD shirt walked into the middle of the demonstration.

After instigating and arguing with demonstrators, the corporate media began interviewing this lady about how much she loves the cops, right there in the middle of the demonstration. 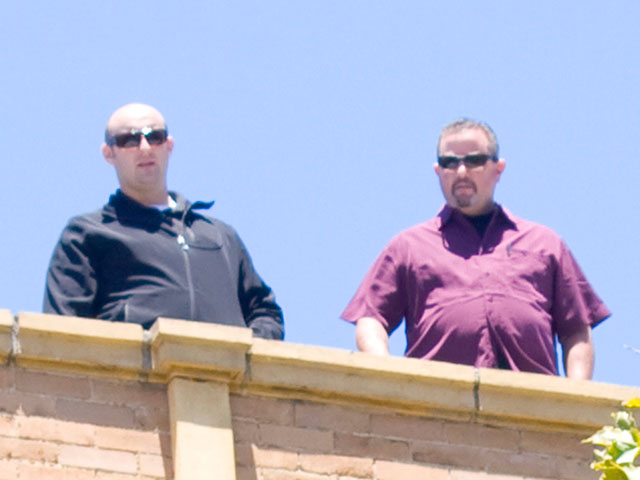 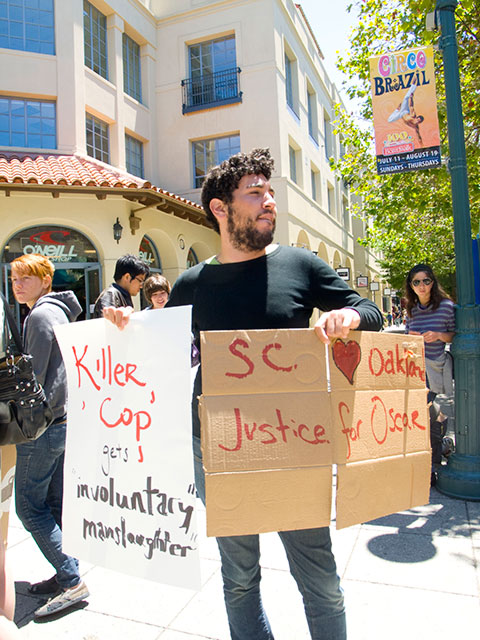 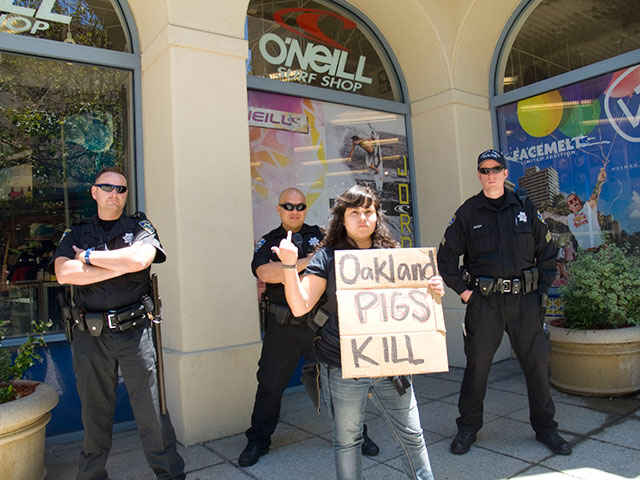 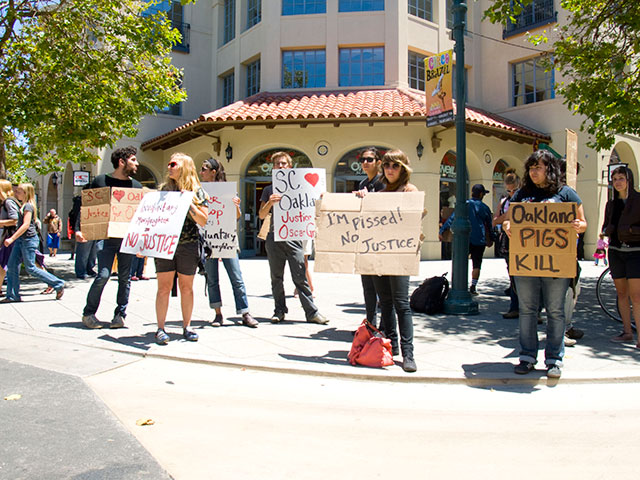 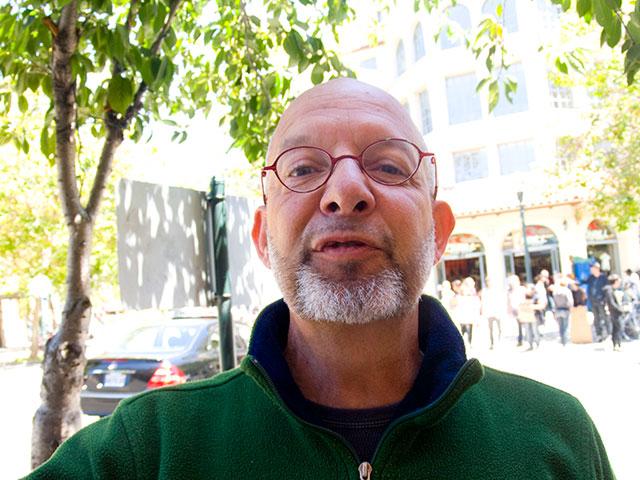 At one point during the demonstration, I was holding the large sign seen above in the second photo which reads, "Police Can Murder! No Justice"

I crossed the street to talk to someone who I thought I recognized as Fred Keeley. I don't know him personally, but in 2002, as co-founder of the Student Environmental Center (SEC) at UC Santa Cruz, I helped to organize both the "Campus Earth Festival" and "Campus Earth Summit" where Fred Keeley was a featured speaker and participant due to his progressive environmental record as an elected official.

Keeley was a member of the California State Assembly, representing District 27 which included parts of Santa Cruz County and Monterey County from 1996 to 2002. He is currently the Treasurer-Tax Collector for Santa Cruz County.

I was expecting to say hello to Fred and maybe talk with him about the demonstration. But then I assumed it was not Fred Keeley, because this man became absolutely irate when he read the sign I was holding and got right up in my face and kept walking at me while I was backing up. He insisted that justice was served, and that I did not sit on the jury, so therefore I shouldn't be holding the sign, because I don't know all the facts of the case. He kept asking me if I knew what the definition of murder was.

At this point, I figured he was just a random crazy and aggressive guy, that happened to look like Fred Keeley, and I asked him to give me some more space. I repeated my request, pointing to the ground and asking for a "square of space" since there are visible squares there on the sidewalk pavement. But this guy refused, kept getting in my space, told me that if I wanted space I should go the fuck back to the other side of the street.

Two young women were passing by and intervened to tell this guy to leave me alone because I was not doing anything wrong; I was just holding a sign. I thanked the women who then went into Urban Outfitters.

Then the aggressive man said, "Oh, what are you gonna do now that your ladies are gone." Even though there were police all over Pacific Ave., this man was taunting me and then followed me to the sidewalk area in front of Palace Arts.

At this point, a man standing on the sidewalk beside his bicycle said, "Fred, you should calm down."

I've done and experienced a lot, and should know better than to have been surprised about any of this, however I went into some form of shock to realize that the angry aggressive man with his finger next to my face was indeed Fred Keeley.

If I had known for sure at the beginning that it was Fred Keeley, I might not have backed up when he got in my space.

While Keeley was in my space, a female police officer approached to diffuse the situation. Keeley stated to the officer, "We're just having a spirited disagreement." To which the officer replied, "That's fine, but you need to give him his space. He's backing up and you keep walking forward at him."

A day later, I looked on wikipedia and learned that Fred Keeley worked for "Law Enforcement Training and Research Associates."

I am going to speculate that this had something to do with his aggressive behavior in reaction to me holding a sign that says, "Police Can Murder! No Justice"
http://bradleystuart.net
Add Your Comments

§sorry
by -
Sunday Jul 11th, 2010 3:37 PM
is the man on the right, on the roof, carrying some sort of weapon under his shirt? or maybe he caught dunlap's.
Add a Comment
§And I thought Fred was a good guy.....
by Extremely disappointed but not surprised
Monday Jul 12th, 2010 12:58 AM
Geeeez Fred. Calm Down! Not only do you look like a tool, but you're definitely acting like a tool of state repression. What a goober.

Thanks again everyone, especially our compa braulio. Kudos amigo.

Bee U Wheat!
Add a Comment
§re: Zack Friend's Blueprint
by Anonimo
Monday Jul 12th, 2010 9:10 AM
Ah Zack Friend, if only you'd moved back to San Diego and completed your career as a low-carb rockstar instead of becoming the biggest tool in town for the pigs. You probably knew your guitar skills, though noteworthy, where nothing compared to your Wasi'chu silver tongue - here's to you and your future city council/state assembly campaign...

http://www.youtube.com/watch?v=HY2tAQMKCLE
Add a Comment
§open-
by mind
Tuesday Jul 13th, 2010 5:36 PM
The guys on the roof work for the SC sherriff. I think it would be good of you to keep an open mind that not all people in law enforcment are bad and capable of murder, just as not all anarchists are desrtuctive, violent, or capable of such. The protest and this article seems to lump all of these people with the officer who killed Oscar Grant and others like him. Many people in law enforcment are there because they believe in protecting the community from actual crime, whether you want to consider this or not it is true. It may also be advantageous to mention that the reason so many officers were assigned to monitor such a protest is because local communities at large were expecting major public outcry to the jury's decision in the Grant case. Things like this can easily get out of hand, whether planned or not, when a large number of angry people get together.
I am not in law enforcement nor do I wish to be, I am simply an individual who keeps an open mind about situations.
Add a Comment
Support Independent Media
We are 100% volunteer and depend on your participation to sustain our efforts!