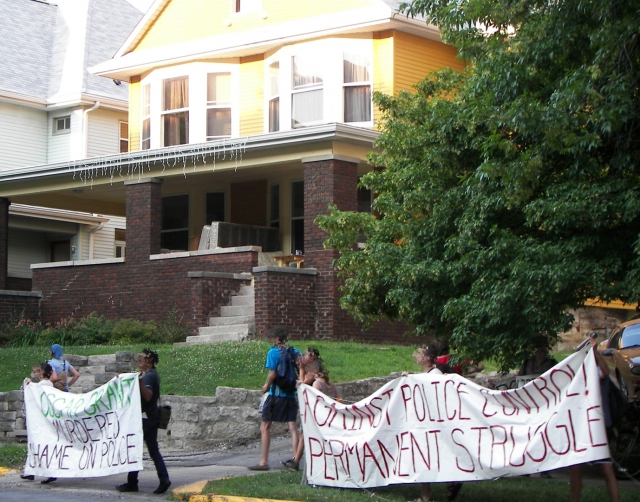 All around the Midwest, people are watching and waiting for the verdict in the Mehserle trial. In Bloomington, we called a demo for tonight in case it came down today and to continue our response to the local police. Particularly as we've witnessed recent cop violence here - again and again - and we know that this problem is systemic and won't ever be solved by any court. But we're paying close attention to the possibility of a very different solution being posed in California, and all over the country, and we are waiting for an opportunity to extend it.

Earlier today, 20 of us set up a picket, an info-table, and banners near the entrance to Bloomington's near west side, an area currently subject to
gentrification and escalating police attention. After an hour of hanging out, and a short assembly, we marched to the downtown jail where 250 prisoners are constantly held. We held a noise-demo outside where the inmates could see us, with banners and chants against police violence, in solidarity with Oscar Grant and local victims, and against the whole system of confinement. The goal here was to share strength with those under immediate attack by the cops and legal system, and to again highlight conflict within the local jail system as the authorities try to impose video-only visitation.

We said we're watching Oakland. From the experience of January 2009, every indication so far is that the solution must be found outside and against the legal system, every judge, and politicians of all stripes. This is also our experience here, as victims of police violence have been marginalized and attacked by the media or charged with felonies by the courts (e.g. the 16-year old shot on 1/7/09 and then charged with assaulting the aggressors). As we look for local solutions, the example from Oakland that is inspiring to us is the uncontrolled social struggle created, not by any self-appointed leader or petty politician, but by those who are directly affected by police control and violence. Once again, we're waiting for an opportunity to extend this example.

We'll be back on the streets when the verdict comes down.

Love for the victims and survivors of police violence, and to everyone in struggle against the cops and confinement- in the Bay, LA, Portland, Toronto and everywhere.

From the demo: "Fire to the jails, freedom for all prisoners." 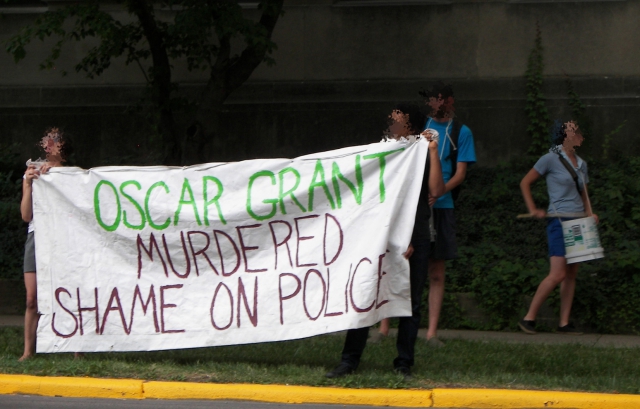 original image (1547x991)
This banner's text was taken from banners used during the January 2009 protests against Grant's murder. Both pictures are from the noise demo at Bloomington's jail.
§
by Indiana Solidarity Wednesday Jul 7th, 2010 4:06 PM 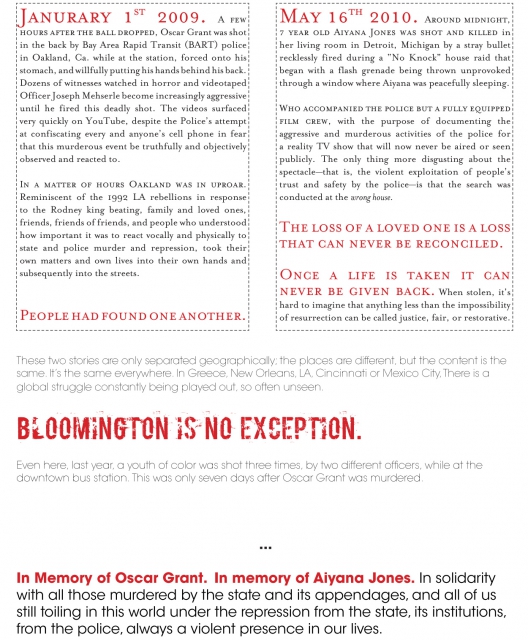 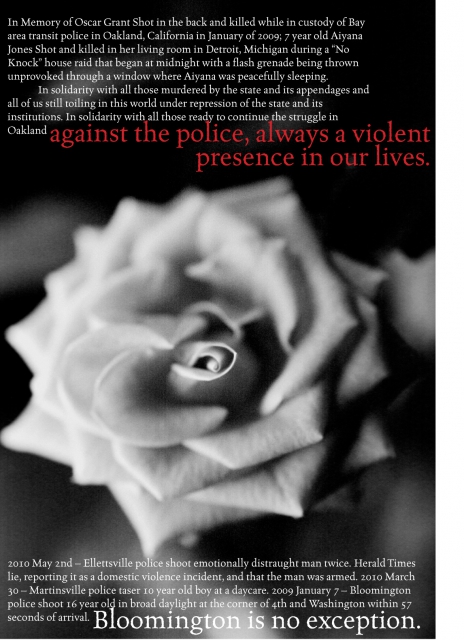 original image (1146x1578)
Add Your Comments
LATEST COMMENTS ABOUT THIS ARTICLE
Listed below are the latest comments about this post.
These comments are submitted anonymously by website visitors.