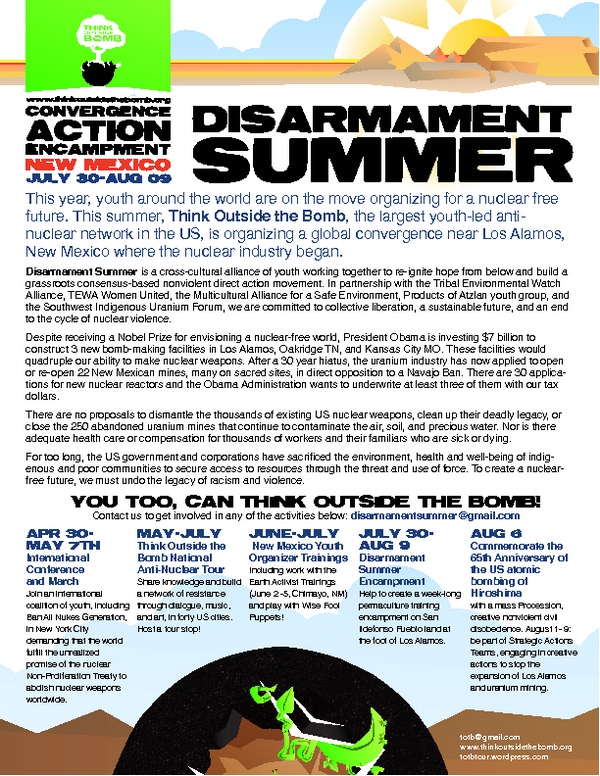 Think Outside the Bomb National Tour rolls into California

The Think Outside the Bomb National Tour (TOTB) will be coming through California this week. The
tour is part of ongoing efforts to build momentum toward charting a new course for U.S. nuclear
weapons policy. Since Nuclear Non-Proliferation Treaty Review hearings began in New York City on
May 1, the tour has been snaking across country, visiting some 40 cities on its way to Los Alamos, New
Mexico—the birthplace of the Atomic Bomb. There TOTB's ongoing Disarmament Summer campaign
will culminate for an encampment from July 30th to August 9th.

TOTB is a national network of youth activists and organizers for nuclear abolition, working to create a
world free of nuclear weapons and nuclear power. According to Rebecca Riley, one of the tour
organizers, “TOTB is building community, educating, and mobilizing people to participate politically
in demanding a nuclear free future from our political leaders and the US Nuclear Industrial Complex.”
Organizers say that 2010 is a crucial year for advancing toward nuclear disarmament as new plans are
forming to rebuild bomb making capabilities at Los Alamos. The renewed effort to enhance the nations
nuclear stockpile come in direct contraction to the Nuclear Non-Proliferation Treaty (NPT)
renegotiation hearings and President Barack Obama’s Nobel Peace Prize.

Through collaboration with groups and communities across the country, TOTB intends to move the
attention stuck on the common global rhetoric and refocus it to the true reality of current nuclear
policies. Along the tour, TOTB is highlighting the ongoing environmental and health effects caused by
the expansive, costly trail of waste and contamination. “There are no proposals to dismantle existing
nuclear weapons and still clean up their deadly legacy,” said Miguel Moreno, a youth leader with
Products of Aztlan and Disarmament Summer organizer from Chimayo, New Mexico. Moreno points
to a growing problem for those living in New Mexico—a ross negligence toward cleaning up
contaminated sites, including abandoned uranium mines that continue to pollute.

California faces a multitude of it's own issues brought by the complex. The state host's two nuclear
power plants, including Diablo Canyon Nuclear Power Plant, just outside of San Luis Obispo. The
plant was built on top of the Hogsri Fault, an offshoot of the incredibly active San Andreas Fault.
Recently, a new fault was discovered—the Shoreline Fault—that lies only hundreds of feet from the
twin reactors. The site has amassed quite the collection of spent radioactive fuel, and while it is
considered temporary storage, there has yet to be any significant plan for a national waste repository. In
the face or serious seismic dangers and no place to put the waste, plant owner Pacific Gas & Electric is
attempting to relicense the plant to operate for another 20 years.

As for California's role in weapons production—just east of the Bay Area, the Lawrence Livermore
National Laboratory continues to play a vital role in the nation-wide quest toward “complex
modernization, which would essentially begin the process of building new nuclear weapons. The lab, in
conjunction with Los Alamos National Laboratory in New Mexico, is managed by the University of
California. The University recently renewed the Department of Energy management contract, forming
a partnership with Bechtel Corporation and military contractors. Bechtel Corporation, based in San
Francisco, is among the many large military contractors that operate in the Middle East and across the
US, being a major force in pushing ahead the expansion of the Nuclear Industrial Complex.

As the complicated and expansive web of nuclearism continues to operate around the country, youth are working to create a network of their own to confront it. Come join us to continue weaving the web toward a better future.

“Nuclear weapons lie at the intersection of so much that is important to my generation: energy, the
environment, and global security — and this tour is going to bring it all together,” says tour participant
Greg Benninger, “I’m really looking forward to talking with local groups, and building a strong
national coalition that will mobilize hundreds of young people from communities across the country to
raise their voices in the global call to end the perpetuation of the destruction brought by nuclear
weapons and energy.”

Think Outside the Bomb is a network of over 500 youth activists organizing on a grassroots level for
nuclear abolition. While building a new generation of anti-racist organizers, we seek to build
relationships with older generations of activists and organizers with whom we can share experience,
knowledge, and energy as we build relationships that foster liberation for all who struggle for justice.
END_OF_DOCUMENT_TOKEN_TO_BE_REPLACED
Added to the calendar on Tue, Jul 6, 2010 9:52PM
§CA Tour Press Release
by 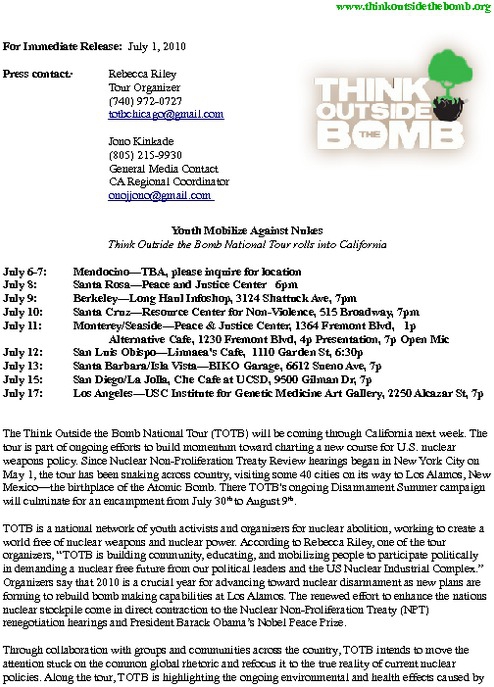 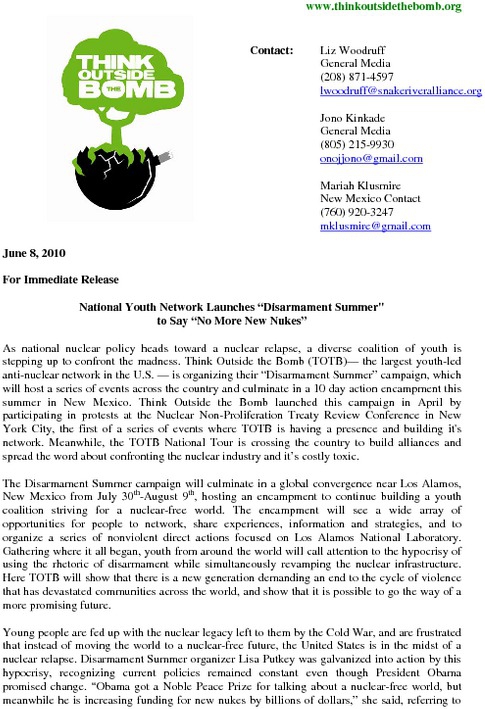 Download PDF (40.2KB)
END_OF_DOCUMENT_TOKEN_TO_BE_REPLACED
Add Your Comments
Support Independent Media
We are 100% volunteer and depend on your participation to sustain our efforts!