by Dan Bacher
Tribal activists essentially took over a meeting of Governor Arnold Schwarzenegger's Marine Life Protection Act (MLPA) Initiative in Eureka today and demanded an opportunity to speak on the record. For about an hour Native Americans as well as non-native supporters from the North Coast criticized the process and demanded tribal representation on the science panel.

As a journalist who has written dozens of articles investigating the conflicts of interests, violation of tribal gathering and fishing rights and privatization of resource management under the MLPA process, I greatly applaud the activists today who exposed the MLPA Initiative for the corrupt fraud that it is!

“We asked them to show us the science that indicates that Tribes are to blame for the decline of any single species – they can’t because there is no science behind their decision making,” states Frankie Joe Myers, a Yurok ceremonial leader and member of the Coastal Justice Coalition.

While well-funded proponents of the MPLA fiasco claim that the process is "open and transparent," the press release below by the Coastal Justice Coalition shows that contention to be a complete lie.
FOR IMMEDIATE RELEASE

“We gathered and harvested the ocean’s bounty for thousand of years in a sustainable manner. For California to blame Tribes for it’s reckless mis-management of our fisheries for the last century is simply appalling,” said Frankie Joe Myers, a Yurok ceremonial leader and member of the Coastal Justice Coalition.

The MLPA is designed to protect ocean resources, but Tribal spokesmen say that it’s an attempt by the Schwarzenegger Administration to greenwash his legacy.

Amid chants of “keep your laws off my culture” and “M-L-P-A taking Tribal rights away” the MLPA Science Advisory Team attempted to meet Tuesday, but Tribal activists essentially took over the meeting and demanded an opportunity to speak on the record. For about an hour Native Americans as well as non-native supporters criticized the process and demanded tribal representation on the science panel.

The Science panel reconvenes Wednesday at the Red Lion Hotel to review four Marine Protected Area proposals developed by the North Coast Region Stakeholder Group, all of which have the potential to impact Yurok and other Tribes’ rights to gather ocean resources.

The Science Advisory Team, which could potentially influence decisions regarding tribal gathering rights, does not have any scientific evidence suggesting that tribal gathering affects resources, but that has not stopped them from proposing a ban on Tribal practices.

“We asked them to show us the science that indicates that Tribes are to blame for the decline of any single species – they can’t because there is no science behind their decision making,” states Myers.

The MLPA structure also adversely affects tribal groups who gather in the intertidal zone. MLPA science panel claims that collecting mussels and seaweed by hand has a “high impact” and therefore would be banned in “backbone” Marine Protected Areas.

“This makes sense in an area like Los Angeles where there is a potential for millions to harvest from the intertidal zone and disrupt the entire ocean ecosystem,” Myers said. “It defies logic here where the pressure is not comparable and the access is severely limited.

The Science Advisory Team has asked Tribes for detailed information about the resources they use. To date, all tribes have declined to provide the information.

“The same resources my ancestors gathered are still abundant today because of time-tested tribal stewardship. If we were to give them details about what we gather it could create the potential for mismanagement and commercialization of those resources,” Myers said.

Salmon and crab can still be commercially harvested in areas considered by the Initiative to have a high level of protection. The MLPAI does nothing to limit pollution.

“What this amounts to is a high level of protection for the commercial fishing and the oil industries but not the ocean. We are harvesting by hand, not for a profit and with no discernible environmental impact. They should not be regulating something that we have managed sustainably since time immemorial,” Myers said.

Tribes gather ocean resources for sustenance, everyday utility items and ceremonial regalia. Gathering is at all times a spiritual process, which is the primary reason why Coast Justice Coalition’s is advocating that the Marine Life Protection Act Initiative recognize that Tribal rights and uses are outside the scope of the State’s authority and the Initiative process.

Advocates of the MLPA process have voiced their intention of hearing the concerns of Tribes and other ocean users. Tuesday, former Assemblywoman Virginia Strom-Martin wrote a guest opinion for the Times-Standard where she proclaimed, “My fellow (MLPA) task force members share a mutual interest in ensuring that traditional tribal uses of the ocean are preserved…”

However, local Indians say that the task force’s actions betray such sentiments. “If she was really concerned about preserving Tribal practices, maybe Ms. Strom-Martin should ensure Tribal members and Tribal scientists are involved in the process,” suggested Myers.

The Coastal Justice Coalition is a group of regional tribal members who agree that the State of California has no right to regulate tribal gathering. 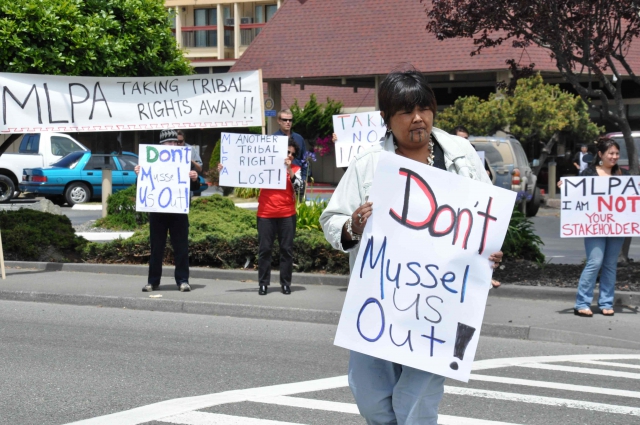 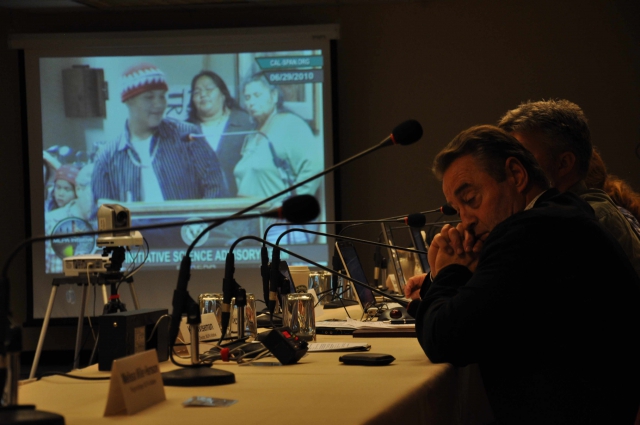 original image (4288x2848)
Add Your Comments
Comments (Hide Comments)
§mapping
by -
"
The Science Advisory Team has asked Tribes for detailed information about the resources they use. To date, all tribes have declined to provide the information. "

This sentence contradicts the idea that the MLPA process ignored tribes and traditionally used areas. In fact, in the MLPA reports, they value indigenous use patterns, and they spend whole pages writing about how they wanted to identify those areas during the mapping process so there is an optimal plan for multiple users. If they refused to say which coastline reaches are most valuable during the planning process, but now are talking about traditional areas that ended up being in the reserve, how secret was the area if it can now be mentioned in your newspaper articles? You have to remember that the state has 35 million people, and many regions of California have had their rocky intertidal areas stripped, particularly in the south.
Add a Comment
Support Independent Media
We are 100% volunteer and depend on your participation to sustain our efforts!