Breaking the Siege of Gaza: Taking a Stand Against Israeli Apartheid 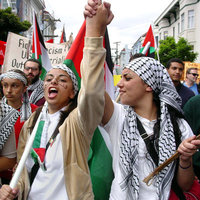 The American government stands nearly alone in it continued support for Israel’s crimes. Please join us for a special event that will discuss strategies for breaking the siege and building an international movement based on boycott, divestment and sanctions against Israel.

Paul Larudee - Participant in the Gaza Flotilla, eyewitness to the attack, co-founder of the Free Gaza Movement

This event is a special evening panel at the West Coast Socialism Conference.

$10 admission at the door. Seating is limited so pre-register at http://www.socialismconference.org/oakland. Select the “single session” option, or register for any larger part of the conference, to guarantee your seat.
END_OF_DOCUMENT_TOKEN_TO_BE_REPLACED
Added to the calendar on Mon, Jun 28, 2010 10:05PM
Add Your Comments
Support Independent Media
We are 100% volunteer and depend on your participation to sustain our efforts!