Add an Event
Newswire
Calendar
Features
Home
Donate
From the Open-Publishing Calendar
From the Open-Publishing Newswire
Indybay Feature
Publish to Newswire
Add an Event
Related Categories: Peninsula | Education & Student Activism
Education Secretary Arne Duncan Gets Unwelcomed at Foothill College
by E. Wentworth
Saturday Jun 26th, 2010 1:41 AM
Union buster and privatizer Arne Duncan is the US Secretary Of Education. He has supported the mass firing of teachers and is working with privateers to destroy public education. Demonstrators protested at Foothill Community College where Duncan was the keynote speaker yesterday. Duncan is scheduled to speak again at DeAnza College graduation ceremony in Cupertino this morning.

Top photo by: E. Wentworth. Students show interest in the placards displayed by demonstrators as they file by on their way to Foothill's graduation ceremony. 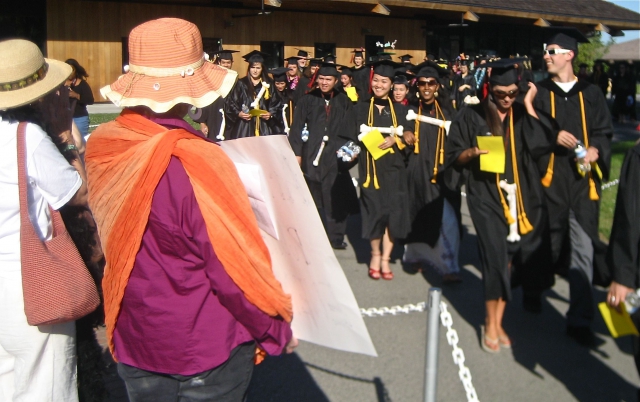 original image (2223x1397)
United Public Workers for Action (UPWA) called for a demonstration when it was announced that US Secretary of Education Arne Duncan would be the keynote speaker at Foothill Community College's graduation ceremony on June 25. After receiving permission from the college administration early this week to stage a peaceful protest, Skyline Community College instructor George Wright received calls from Foothill College president Judy Miner asking that he cancel the planned demonstration. He also received calls from Arne Duncan's counsel trying to convince George that Duncan should not be the target of protesters.

KTVU-TV interviewed both the demonstrators and Mr. Duncan before and after yesterday's graduation ceremony. The demonstrators explained that the Obama administration's emphasis on charter schools is linked to the demonization of teachers unions and the privatization of the public school system, and that slashing public school funding is not in the best interest of our citizens. In Mr. Duncan's soundbite, all he could muster was the usual answer often used to obfuscate the issue, "Charter schools ARE public schools."

Duncan is the former chief executive officer of the Chicago Public Schools. He is credited with raising test scores and educational standards in Chicago where, in fact, he actually facilitated the privatization of public education in Chicago. This was achieved through the expansion of charter schools and the weakening of the public teachers union. A spokesperson for the UPWA said it is ironic and tragic that the Foothill-DeAnza Community College District is allowing an enemy of public education to give the keynote addresses at public Foothill and DeAnza Colleges at a time when public education in California is under attack.

Activist group the Raging Grannies, many of whom are retired public school teachers, endorsed this action and composed several songs for the event. Demonstrators sang as the graduating students lined the walkway to proceed to the ceremony. While most students were unaware of the nature of the controversy surrounding the keynote speaker, many were interested in the demonstration. Some asked questions of the protesters and expressed concern, especially those who are headed to careers in counseling and education.

http://www.UPWA.info
§students share concerns for the future of education with demonstrating Raging Grannies
by E. Wentworth Saturday Jun 26th, 2010 1:41 AM 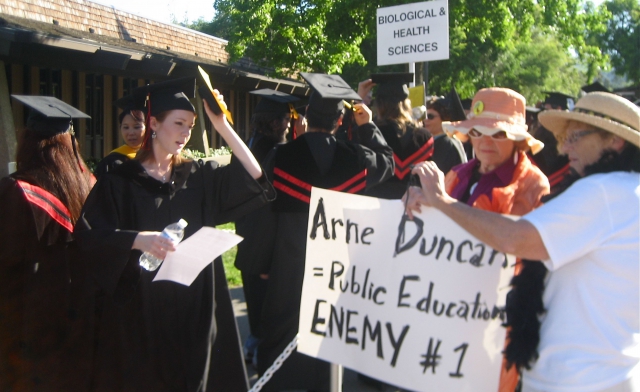 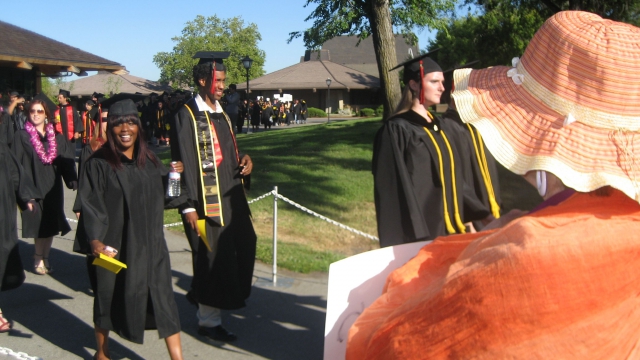 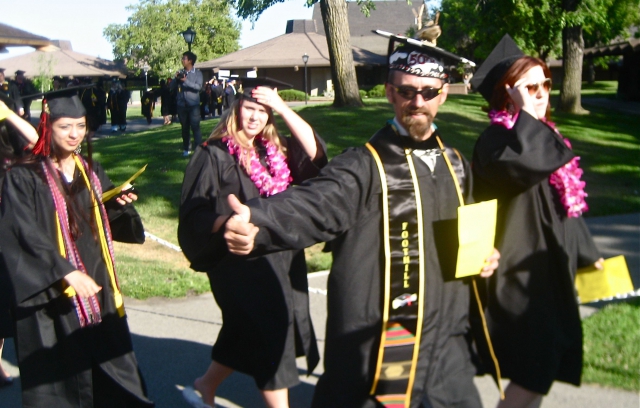 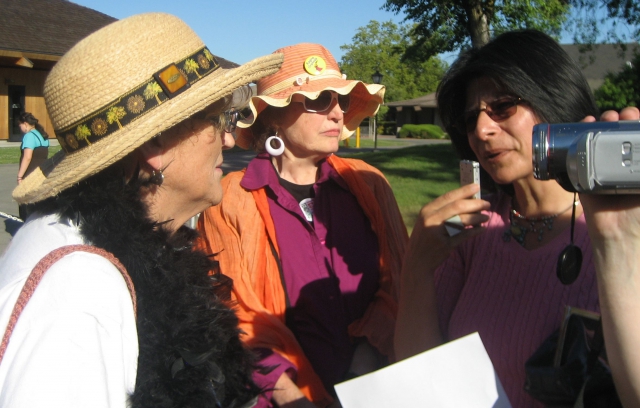 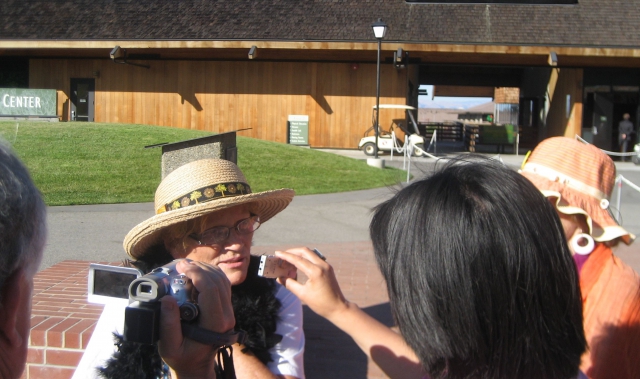 original image (2534x1504)
KTVU-TV was also on hand and aired the story on the 10pm news, giving demonstrators more air time than they did the Education Secretary. Local papers also sent photographers who covered the demo.
http://www.UPWA.info
§No workers' rights in Duncanland!
by E. Wentworth Saturday Jun 26th, 2010 1:41 AM 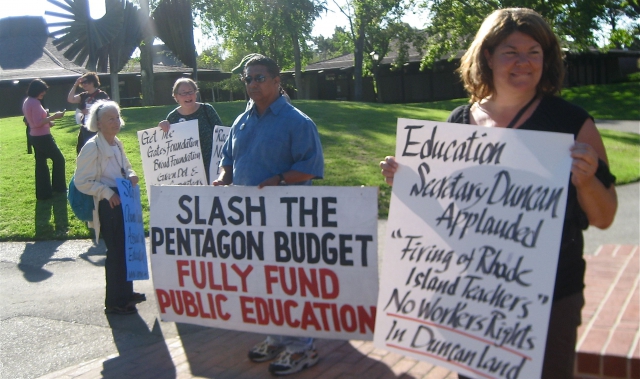 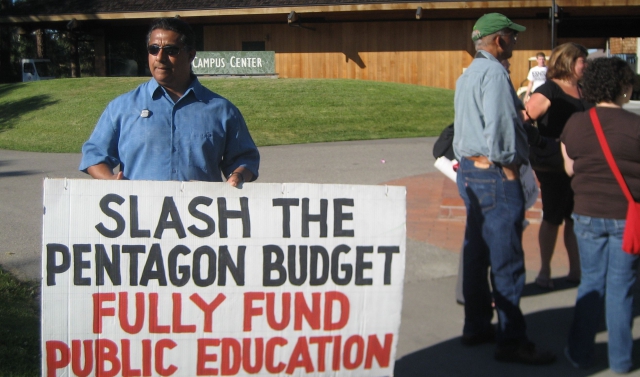 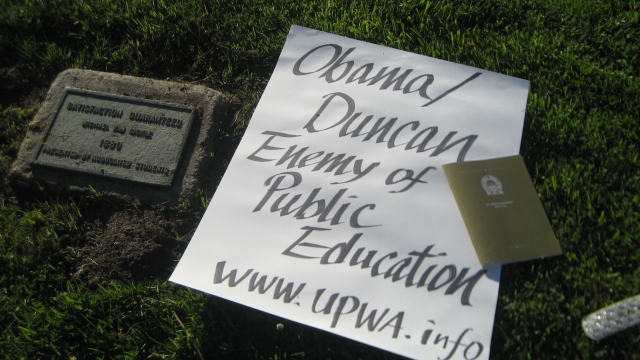 §Education Truth
by Lisa Martell
Sunday Jun 27th, 2010 6:10 PM
Lets fix our traditional public schools and do as the signs say shift money from prisons and pentagon spending to our children.
Charter schools is a business, it is a selling job as the school owners get reimbursed per child per year from the state. So it is a sales job, with fancy advertising trips to Turkey, learning Turkish language, lying about test results. Do YOUR research, some charters schools are good others are not. http://www.charterschoolwatchdog.com
http://www.charterschoolwatchdog.com
Add a Comment
§Night News report here
by ...J.J.
Monday Jun 28th, 2010 2:00 AM
http://www.youtube.com/watch?v=k29h9Uyv27E