No Home, No Justice, No Peace! 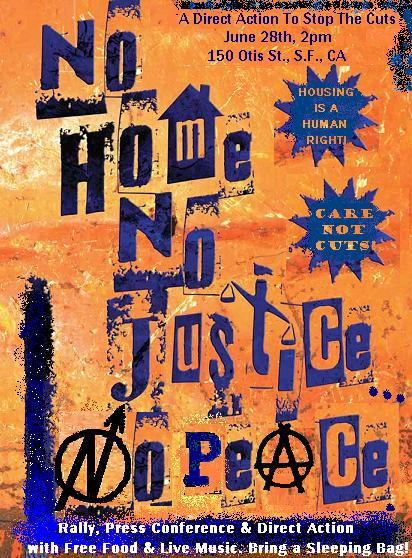 What: "Direct Action to Stop the Cuts" is holding a rally, press conference, and action in protest of the closing of 150 Otis Homeless Shelter and Mayor Newsom’s proposed budget cuts to vital poor and homeless services in San Francisco. 150 Otis residents say “We refuse to let this injustice go on unnoticed and we won’t go down without a fight!” We demand more care, not cuts and more affordable housing fit for human beings!

Why:
There are 6,000-15,000 people without housing in San Francisco and less than 1,000 emergency shelter beds. 300 people a year die on the streets of San Francisco due to homelessness. Yet the politicians and bureaucrats responsible for the shelter system say no one will miss the 59 shelter beds when 150 Otis closes:
“We’re always looking at capacity in our shelter system compared to demand. Right now, we feel that we are meeting the need.” (Daryush Kayhan, Mayor Newsom’s Homeless Policy Director, salary: > $370,000/yr.)

This is an outright LIE, as anyone who has waited all night for a shelter bed can tell you! Poverty, homelessness, and unemployment are skyrocketing due to the economic crisis, yet Mayor Newsom is cutting the budget for San Francisco’s poorest people at a time when we need these services more than ever!

Meanwhile we have the highest paid police in the United States, Mayoral staff who make over $300,000 a year and thousands of empty units of housing that should be turned over to the homeless for shelter at little or no cost. The SF Budget Justice Coalition, Coalition on Homelessness, and Board of Supervisors have proposed solutions like eliminating tax breaks and corporate welfare for the rich, but the Mayor continues to ignore them and instead suggests repealing rent laws making it easier for landlords to evict renters, flip their houses and increase rents, causing more homelessness and poverty.

The people of San Francisco have solutions and vital needs, and when they are ignored by our city’s leaders, it is time to organize and take direct action to win justice! An Injury to One is an Injury to All!

Bring a sleeping bag, either to use yourself during the CD, or to donate.

There will be more actions to come! Meet us at 16th & Mission St. July 19th, 5:30pm for a Housing Takeover and bring your friends!

END_OF_DOCUMENT_TOKEN_TO_BE_REPLACED
Added to the calendar on Sat, Jun 26, 2010 1:16AM
Add Your Comments
Latest Comments
Listed below are the latest comments about this post.
These comments are submitted anonymously by website visitors.
TITLE
AUTHOR
DATE
The 59 shelter beds are not slated for replacement...
Matt
House all Homeless!
aaron
housing for vets
HSA
Support Independent Media
We are 100% volunteer and depend on your participation to sustain our efforts!