Add an Event
Newswire
Calendar
Features
Home
Donate
From the Open-Publishing Calendar
From the Open-Publishing Newswire
Indybay Feature
Publish to Newswire
Add an Event
Related Categories: Americas | International | Police State & Prisons
No Confidence that Mexico's Supreme Court Will Do Justice in Atenco Case
by carolina
Thursday Jun 24th, 2010 12:43 PM
The Supreme Court knows it has the obligation to order freedom for the political prisoners and pursued people of San Salvador Atenco 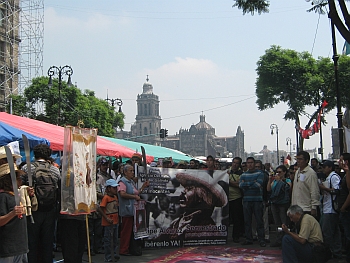 So spoke Martha Pérez of the Peoples’ Front in Defense of the Land (FPDT) on Wednesday, June 23, as the federal Supreme Court of Mexico began deliberations on the Atenco case.

The Court will also decide the future of América del Valle and Adán Espinoza, pursued by the State and forced into hiding, far from their families, for the last 4 years.

Today, two busloads of campesinos from Atenco have come to the Supreme Court, and are joined by people from the CNTE, SME, San Juan Copala, Pasta de Conchos, family members of children killed at the ABC nursery, the Other Campaign, students, independent media, and others.

The meeting has scarcely begun when we hear the distressed voice of Trinidad Ramírez announcing that she has gotten a call from her daughter, America del Valle, from the Venezuelan Embassy, where she is requesting asylum from the government of President Hugo Chávez. She fears for the life of her daughter. She doesn’t know when she’ll be able to see her again. She asks a small group of people to go with her to the Embassy to try to see her. Her voice is full of anguish. But she also says: “I can’t speak only about myself. I have to speak about everyone else. I have to speak about the people of Mexico, so wounded, so much under attack. We struggle for a cause and all we get is repression. All they give us is jail, torture, disappearance, or murder –death. This is what we get. Judges, look outside your windows, not just to understand the Atenco case, but to see what’s happening in the country. We need you to stop twisting the laws, to make the Constitution mean something.”

“America del Valle, we want you in the streets!” The slogan is shouted again and again while we’re there, along with “Free all political prisoners!”

Heriberto Salas of the FPDT expresses what a lot of us feel: “The Supreme Court is not giving the Mexican people justice. We saw this exactly one week ago when they ruled on the ABC Nursery case. It’s outrageous to know that these judges have said no one is responsible for the deaths of the children who were killed in this nursery. This fills us with righteous indignation. The role these judges are playing has been seriously called into question. And so, they must let our comrades go, doing justice in at least one case. And others follow, such as the case of the SME electrical workers and the case of the mine workers. We demand justice in all these cases.”

A commission goes into the building to deliver petitions with 30,000 signatures demanding freedom for the political prisoners of Atenco. And the petition drive goes on.

The Supreme Court knows it has the obligation to order freedom for the political prisoners and pursued people of San Salvador Atenco according to the Constitution, the law, and international treaties Mexico has signed. On February 9, 2009, the Court admitted that there were human rights violations in May of 2006, but decided to protect the powerful masterminds of the crimes. The Court is aware of all the government misconduct, generic charges, and fabrication of testimonies and evidence in the case. It knows that the felony of aggravated kidnapping is an unconstitutional measure used to criminalize the social movements, and it revealed this in a rare act of justice when it found the indigenous women of Querétaro, Alberta Alcántara Juan and Teresa González Cornelio innocent and ordered their release. They were charged with kidnapping six federal agents. The Court knows that in this case, as well as the Atenco case, the detention of policemen or other officials for a few hours as a means of achieving justice has nothing whatsoever to do with a real kidnapping.

In a letter sent from inside the Venezuelan Embassy, América del Valle says: “I hope I’m wrong, but all indications are that in the next few days, the judges will make a State decision, leaving some of the Atenco political prisoners in jail. They’ll let a few go and reduce the sentences of others, but the reality is that injustice will prevail.…. In our country there is no justice. It’s clear to me that the Court cannot uphold the indefensible aberration of “aggravated kidnapping”; a clear stand on this issue would revoke the shameful sentences of up to 112 years in prison for our prisoners. But the Court has orders to look for a “legal” maneuver to prevent the release of some of our comrades. All indications are that this will determine the final decision, despite the honorable intention of very few judges to put an end to this deep injustice once and for all (our acknowledgement to them for this). What’s this all about? Handing down a spectacular, exemplary punishment to people who are symbols of social struggle. It’s a way of warning all those who decide to struggle of what will happen to them if they follow through with their intentions. The decision-makers know the situation is unstable. They’re afraid. They’re trying to discourage people from making any decision to rebel. They’re trying to terrify them. That’s why I think this is a State decision. The political class must make good on its threats, and for now, what better candidates than the rebellious, unbowed, incorruptible campesinos of the FPDT. But we don’t accept this. We want justice, not more tricks from law merchants. We’re not going to resign ourselves to this. We’re going to keep on fighting, because in a country like ours
where the doors of justice are closed, the only alternative left to us is to struggle and get organized to stop all this impunity.” Read the complete letter at: http://atencofpdt.blogspot.com/

------------------------
Tuesday, June 29 is a day of national and international actions in solidarity with Atenco. People in other countries can show support at Mexican embassies or consulates or other appropriate spots. 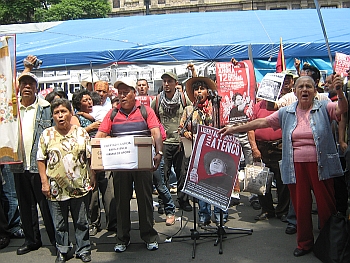 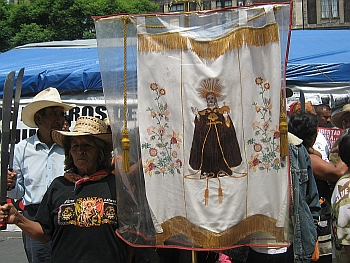 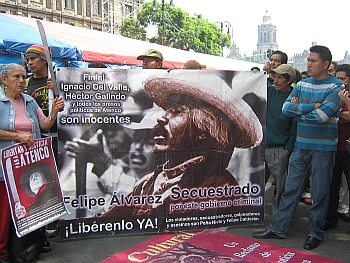