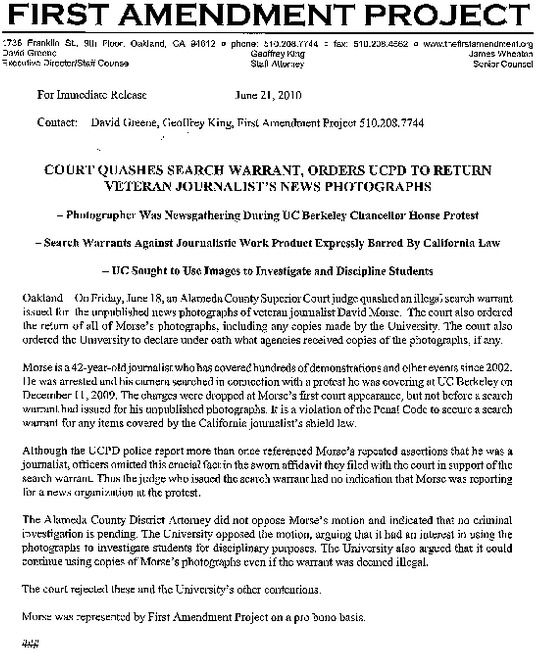 – UC Sought to Use Images to Investigate and Discipline Students

Morse is a 42-year-old journalist who has covered hundreds of demonstrations and other events since 2002. He was arrested and his camera searched in connection with a protest he was covering at UC Berkeley on December 11, 2009. The charges were dropped at Morse’s first court appearance, but not before a search warrant had issued for his unpublished photographs. It is a violation of the Penal Code to secure a search warrant for any items covered by the California journalist’s shield law.

Although the UCPD police report more than once referenced Morse’s repeated assertions that he was a journalist, officers omitted this crucial fact in the sworn affidavit they filed with the court in support of the search warrant. Thus the judge who issued the search warrant had no indication that Morse was reporting for a news organization at the protest.

The Alameda County District Attorney did not oppose Morse’s motion and indicated that no criminal investigation is pending. The University opposed the motion, arguing that it had an interest in using the photographs to investigate students for disciplinary purposes. The University also argued that it could continue using copies of Morse’s photographs even if the warrant was deemed illegal.

The court rejected these and the University’s other contentions.

Morse was represented by First Amendment Project on a pro bono basis.

http://www.indybay.org/newsitems/2010/04/2...
Add Your Comments
LATEST COMMENTS ABOUT THIS ARTICLE
Listed below are the latest comments about this post.
These comments are submitted anonymously by website visitors.