Diablo Food Not Bombs Succeeds in Feeding the Hungry!

by Derailer (diablofoodnotbombs [at] gmail.com)
On Thursday June 17th, Diablo Food not Bombs, with the support of East Bay and San Francisco Food not Bombs, successfully fed hungry and underprivileged people at the Concord Farmers Market. This is in contrast from the previous week when the Health Department and the Concord Police shut down the operation. However, this week Diablo Food not Bombs was able, amongst many supporters and media present, to fed many homeless, hungry and poor people as the Health Department and the Concord Police looked on helplessly. The group fed many people including a majority of the farmers who were selling produce there. 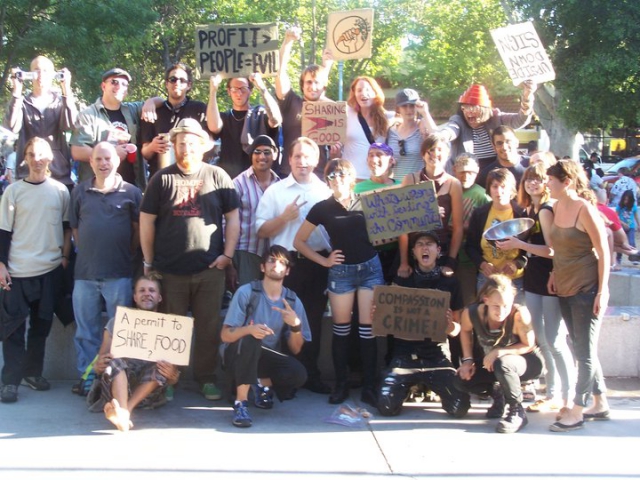 original image (720x540)
On Thursday June 17th, Diablo Food not Bombs, with the support of East Bay and San Francisco Food not Bombs, successfully fed hungry and underprivileged people at the Concord Farmers Market. This is in contrast from the previous week when the Health Department shut down the operation, confiscated the food and supplies and then wasted the remaining food in the trash. They were assisted by the Concord Police who yelled and assaulted members of the group while they were trying to save what was left of the food. However, this week Diablo Food not Bombs was able, amongst many supporters and media present, to fed many homeless, hungry and poor people as the Health Department and the Concord Police looked on helplessly. The group fed many people including a majority of the farmers who were selling produce there.

The Health Department and the Concord Police Department told reporters that the reason that they did not shut the group down on Thursday is because they were only serving members of their own party. This statement is simply not true. The Contra Costa Times confirmed this in their article and we have pictures and video to prove it as well. Diablo Food not Bombs fed many more underprivileged people, who were not part of their group than they fed themselves including many farmers, whom they brought plates directly to. This is how the Health Department and the Concord Police saved face by falsely stating that the group was only feeding its own members. With all the people and media present that day they would have looked extremely bad shutting down a benevolent group that was just sharing free food with the hungry. This is also a testament to how much power ordinary people actually have, especially together. However, in the largest sense the Health Department and the Concord Police are absolutely correct in their statement because Diablo Food not Bombs considers everyone in the community their friends and part of their group!!!

There have been a lot of falsehoods disseminated by certain individuals, institutions and the media surrounding the issue of permits. It has been said that the group was offered help in obtaining a “free” permit. This is completely false. First, on June 10th after their food and supplies were confiscated and thrown away, the police did retrieve a permit application for them but it was definitely not free. Blatantly written on it notes a $250 application fee and a $1,000,000 insurance policy. They still have the application received that day and are willing to send a copy to anyone who requests it. The Health Department and the city of Concord, never communicated directly to them that they would give them the permit for free, even though they told that to the media in another attempt to save face. Even if the fees and the cost of the permit were in fact free, the requirements of the California Retail Food Code are far beyond Diablo Food not Bomb's capacity to ever feasibly meet. Lastly, they legally do not need the permits because they DO NOT APPLY TO THEM. They are not RETAIL. They simply share our food for free. Also International laws like the UN Charter, federal laws like the Bill Emerson Good Samaritan Food Act and many court rulings such as First Vagabonds Church of God vs. City of Orlando, gives the local authorities absolutely no legal grounds for repressing their efforts to feed hungry people in our community.


One of the most obscene lies being touted is that Diablo Food not Bombs is trying to undermine the farmers market by taking money out of the pockets of the local farmers and business owners. The last thing Diablo Food not Bombs wants to do is make the lives of the working poor any harder. Farmers are the keystone of our society and to think that they would try to undermine them is an absurd notion. They want to do everything they can to help them thrive. When they talked about “overpriced vendors” in their previous statement they were talking about vendors there that were serving cooked meals, not the farmers. However, the group is not attacking them either. They simply think that the meals are overpriced and not everyone can afford them. The reason they are overpriced is because of the same bureaucratic expenses they have to go through as well as the economic conditions which makes their food relatively high cost. When they said they were a “threat” to profits, they later expressed that this threat was falsely perceived because the people they were serving cannot afford the vendors’ food in the first place. Even though some people might see them as a “threat” to business interests, they in fact are not at all and any other interpretation of their previous statement is taking it out of context. They sympathize with the farmers need to make money in order to survive and want to give them all the support and gratitude they can for what the farmers do for us. That is why when they serve food at the farmers market they bring plates of food to all the farmers who want to eat! Last Thursday a majority of the farmers took plates from the group and were as grateful to them as they are to the farmers. This is their way of giving back to those that give so much for us. Also because the group is a non-profit, when the farmers make a tax-deductible donation they benefit as well while they help to feed hungry people. When Diablo Food not Bombs serves or collects donations from the farmers they tell them exactly who they are and exactly what they are doing, they do not trick them. They are not taking anything away from the farmers; they are only cooking and serving the excess that would have otherwise been wasted. Besides, over a third of the food produced in this country is never eaten anyway! Any condemnation of farmers is the antithesis of what Diablo Food not Bombs is all about. One of their core tenets is solidarity not charity. Meaning that they stand with and not above those they are assisting.
Diablo Food not Bombs stands in solidarity with all working class and poor people especially during this economic crisis.

The ultimate goal of Diablo Food not Bombs is to make genuine connections and build community. They would argue that many of society’s problems stem from a lack of community cohesion. During this economic crisis everything does in fact become overpriced, especially for homeless, poor and otherwise underprivileged people. They recognize this and are eager to feed anyone who is willing to eat out of their 5-gallon plastic buckets. Feeding their neighbors free food is their way of creating a community with the hungry people of our area that would otherwise be non-existent. What they are trying to do is create a genuine community event and make real human connections that are beyond the framework of purely economic transactions. A genuine community event would be one that includes everybody, not just those with money to spend. With many people from the community gathered in one place they see the Concord Farmers market as an auspicious place to make these ideals of inclusion come to fruition, especially for those who are often over looked or flat out ignored. They would also like to think that that those who facilitate, run or support the farmers market would also want to create a genuine community event inclusive of everyone and not solely be driven by business interest which they do not affect anyway. If this is the case, it is an expression of business interests over the interests of people in the community, which would be very unfortunate. If you read the history, the Todos Santos Park and plaza used to be a fantastic communal space in which anyone could come share in food, festivities and be part of a group. All Diablo Food not Bombs are trying to do is revive these ideas and create a loving and harmonious community in which we care for one another.

Diablo Food not Bombs also wants everyone to know that they have the best of intentions. They are all compassionate people that just want to help those in need. It has been said the they are deliberately interfering with the efforts of Anna Chan aka “The Lemon Lady.” A great community member who collects food for local food pantries. This is completely false. They adore Anna and everything that she does. That is why the group went out of their way to network with Anna told her they are willing to work with her and even offered her excess food they had left over. They are in no way interfering with the efforts of the Lemon Lady. Once they are established, Diablo Food not Bombs plans on working with many benevolent individuals and organizations in the community. They are willing and want to work with other homeless and hunger action and advocacy groups, just like other Food not Bombs chapters do. They wish to support the efforts of anyone who is helping those in need. The members of Diablo Food not Bombs are driven by love, compassion and the will to do something directly for the hungry people in our community.

We all want share your company so come eat with us on Thursday!!!

For further questions and information please contact Diablo Food not Bombs at:

Diablo Food not Bombs is an autonomous, all-volunteer, donation based organization that shares food with those in need. They are non-hierarchal and consensus based. They are non-violent and serve vegan and vegetarian meals to the hungry in our community. They serve on Thursdays at 4:30pm during the Farmers Market in Todos Santos Park, Concord CA.
§
by Derailer 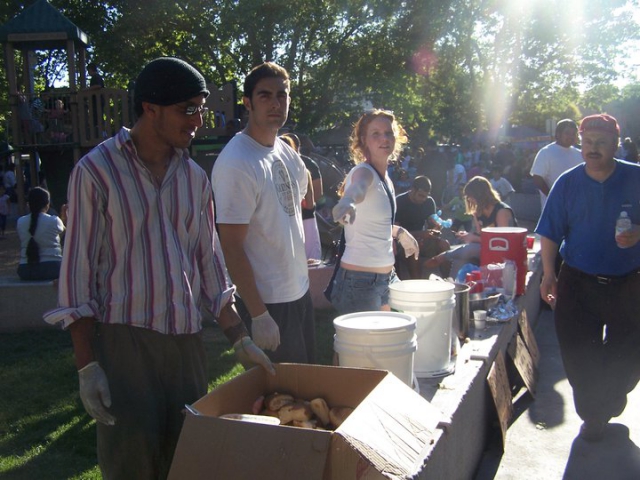 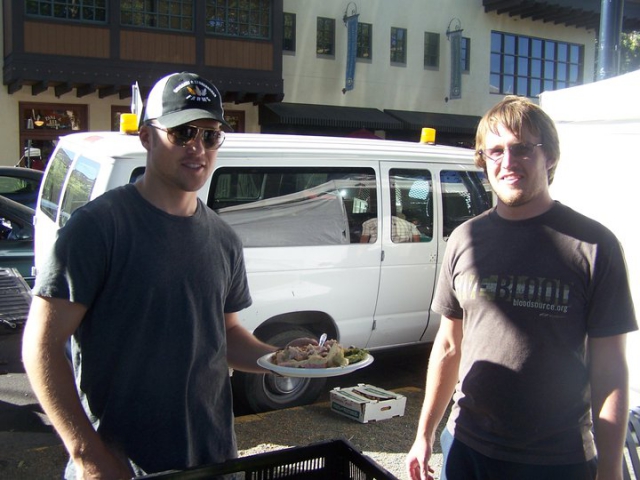 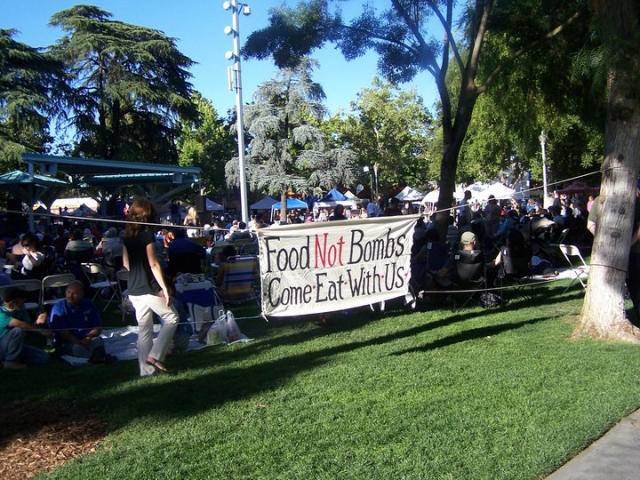 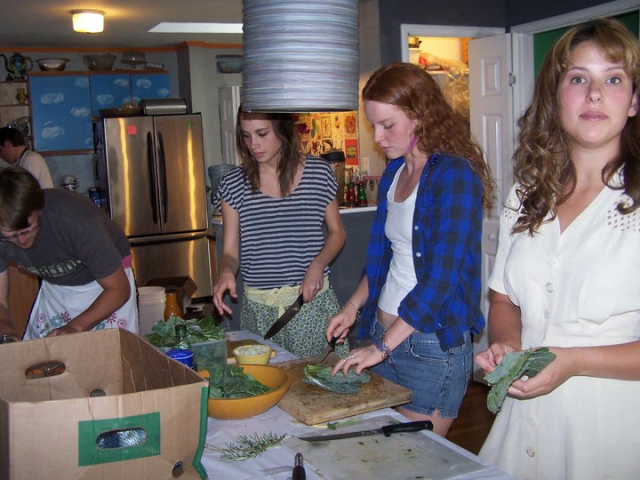 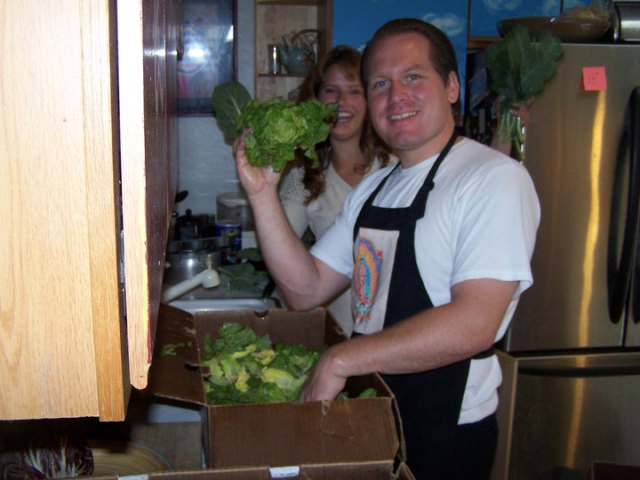 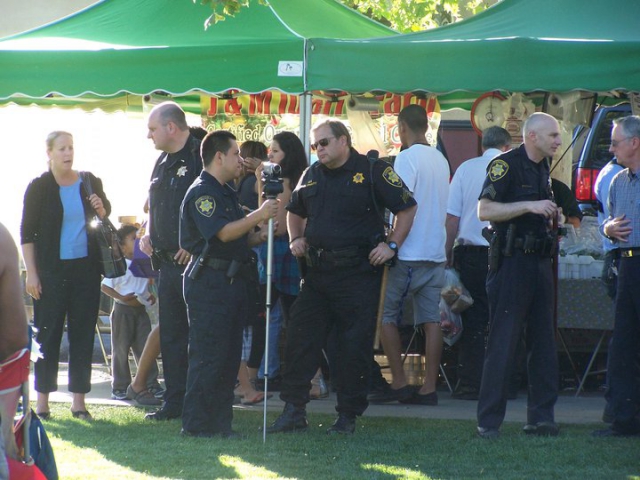 original image (720x540)
Add Your Comments
Support Independent Media
We are 100% volunteer and depend on your participation to sustain our efforts!