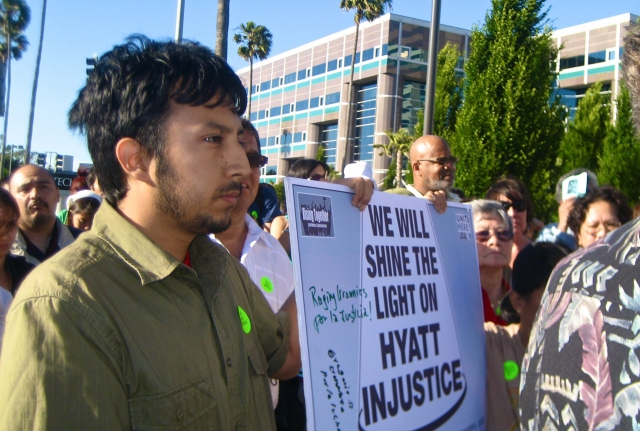 original image (2344x1579)
June 17th marked the two-year anniversary of a campaign by hotel workers at the Hyatt Santa Clara for employment justice. It was exactly two years ago when workers first called on Hyatt Santa Clara management to agree to a fair process to choose whether to form a union. The workers say they want to to be able to begin the process of unionization in an environment free from employer harassment and intimidation.

Yesterday community leaders and activists from organizations including SIREN (Service, Immigrants Rights & Education Network) had a window of opportunity to remind Hyatt management of their moral obligation to respect the workers. Two representatives of Hyatt management agreed to make a brief appearance toward the end of a rally held outside the giant hotel. They reportedly only did so, however, to prevent the workers and community members from entering the hotel building.

The two management representatives, wearing uncomfortable smiles, stood before a group of about 200 community members and employees. They gave little response other than to nod in agreement to take the demonstrators' message to Hyatt Regency Santa Clara General manager Peter Rice.

Speakers including Cesar Juarez of SIREN spoke to management representatives saying it is the workers who create the wealth for the Pritzkers--Hyatt's billionaire majority owners--who cashed out $900 million in one day in the sale of a minority share of Hyatt stock in November 2009. The value of Hyatt shares has skyrocketed since the initial public offering of stock at that time.

Other community remembers asked that top management be reminded that housekeepers endure a high workload that for some has led to a struggle with injuries and daily pain. Hyatt Santa Clara housekeepers start at under $25,000 per year and must pay up to $300 dollars each month for family healthcare. Housekeepers are often supporting families including small children who suffer from lack of resources. The community is left to try, in a time of deep cuts to social services, to "fill in the gaps" left when corporations like Hyatt do not take responsibility for worker well-being.

As the two people representing management left the rally, the Raging Grannies sent their own message in song, joined by workers who have by now memorized the familiar refrain to the tune of Yellow Rose of Texas: Vivimos todos juntos en la comunidad. (We all live in the community).

In recent months, Hyatt has ignited a national controversy for its treatment of workers in Santa Clara and across North America. Last week, protests of Hyatt with hundreds of workers and community allies were held in 5 cities throughout the United States and Canada.

Yesterday's rally at the Santa Clara Hyatt was organized by UNITE HERE Local 19, which represents 5,000 workers in the hotel, laundry, food service, and casino industries in Northern California. It is a member of Rising Together, an alliance of hotel workers and community organizations.
§Shining a light on injustice
by R. Robertson Friday Jun 18th, 2010 3:33 PM 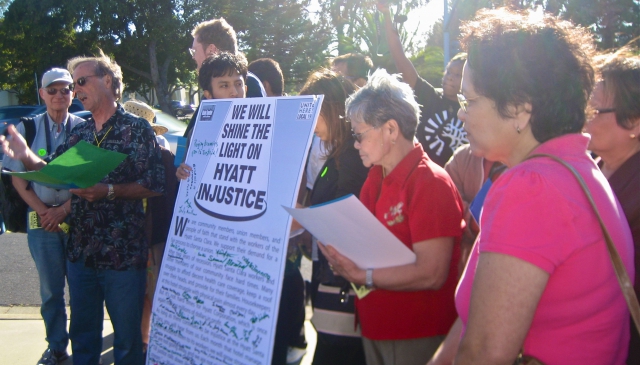 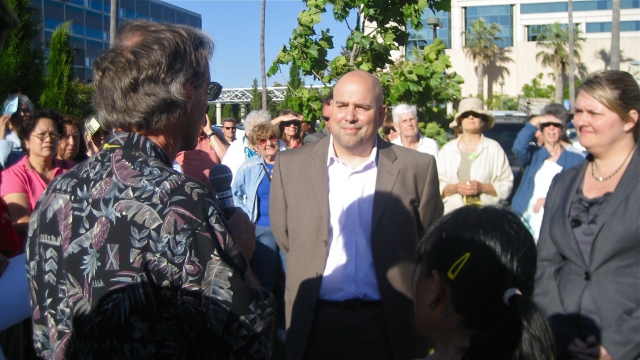 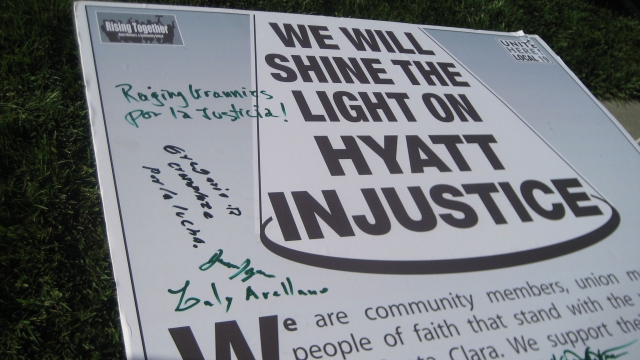 original image (2465x1496)
Phil checks his watch..the rally ended promptly at the agreed upon time
http://www.unitehere.org
Add Your Comments
Support Independent Media
We are 100% volunteer and depend on your participation to sustain our efforts!