Add an Event
Newswire
Calendar
Features
Home
Donate
From the Open-Publishing Calendar
From the Open-Publishing Newswire
Indybay Feature
Publish to Newswire
Add an Event
Related Categories: East Bay | Education & Student Activism | Police State & Prisons
UC8 Reporter: UC Regents' Opposition to Motion to Quash Warrant, and Movant Reply
by dave id
Thursday Jun 17th, 2010 4:16 PM
After the hearing on my motion to quash UCPD's search warrant was twice delayed, representatives of The Regents of the University of California submitted their written opposition to the motion on June 8th. On behalf of the Movant (that's me), the First Amendment Project filed a reply to UC's opposition on June 15th. The hearing on the motion will be heard at 2pm, June 18th, in Department 115 at the Wiley W. Manuel Courthouse in Oakland with Judge Yolanda Northridge presiding. [All related filings are attached in full below.]
Of interest to anyone following the story of the events of December 11th, 2009, and its aftermath, is the police report filed by UCPD at the time which shows that they had no evidence to support the extreme charges filed against myself nor any of the other "UC8" arrestees. Not surprisingly, the Alameda County DA filed no charges against any of those arrested. The police report is attached below in the declaration of attorney Steven Rosenbaum, who represents arrestee Angela Miller.
http://www.indybay.org/newsitems/2010/04/2...
§Opposition by UC Regents to Motion to Quash Search Warrant and Return Property
by dave id Thursday Jun 17th, 2010 4:16 PM 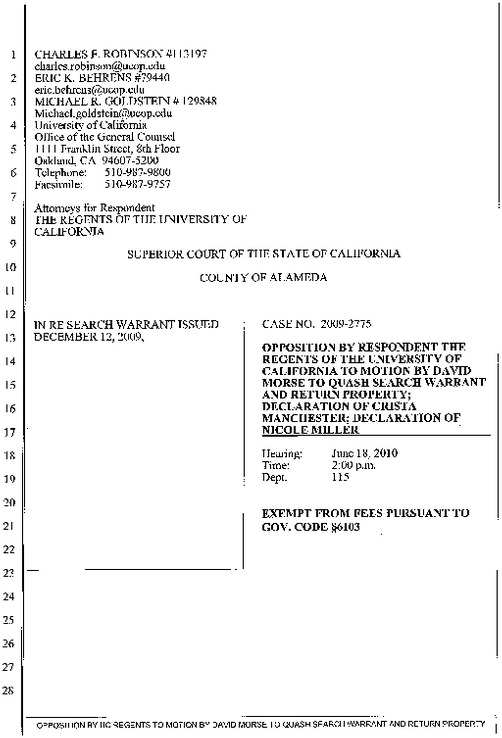 UC makes a number of arguments herein as to why the warrant they sought and received should stand and why they should not have to return my original disc or cease using my photographs for their own purposes. One of their arguments includes a disingenuous conflation of the roles of observers and participants at public demonstrations -- to the point where every reporter ever covering any newsworthy event would be considered a participant, thereby eviscerating the California journalist's shield law. Another argument they rely on is the fact the I did not have my current Indybay press pass on me at the time I was detained, rather I had an expired copy I carry as a back-up. This is largely irrelevant to the fact that they did not inform the judge from whom they requested the warrant that I was a journalist, or had claimed to be at least a half dozen times while I was in UCPD custody. Several other arguments UC relies on involve the intricacies of U.S. and California law and the related case history.
http://www.indybay.org/newsitems/2010/04/2...
§UC Opposition Declaration of UCPD Officer Christa Manchester
by dave id Thursday Jun 17th, 2010 4:16 PM 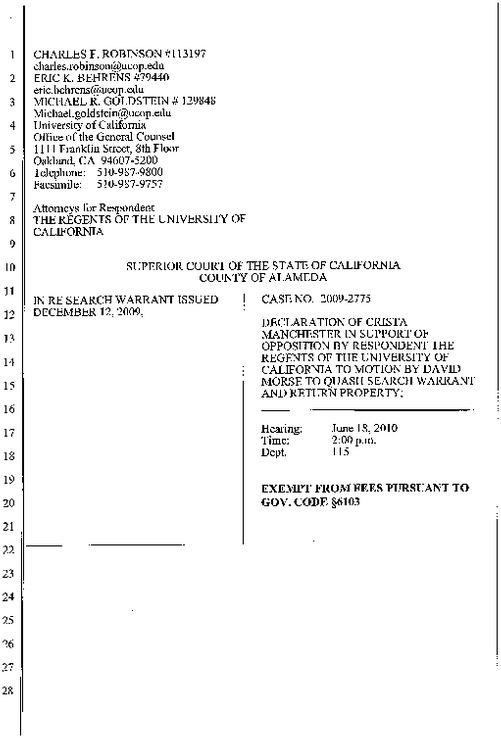 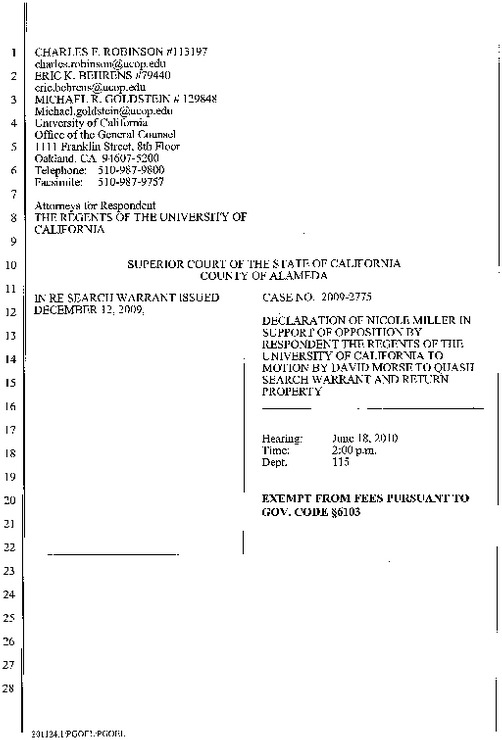 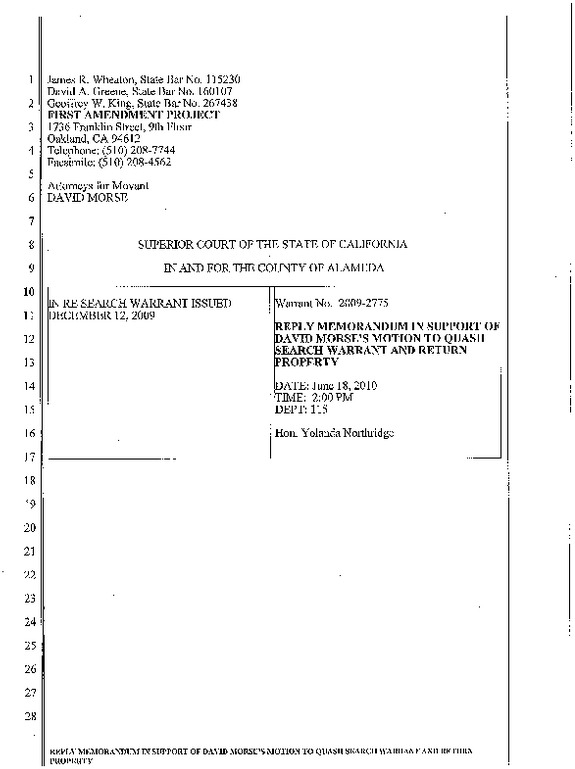 Point by point refutation of UC's opposition, filed by the First Amendment Project on my behalf:


REPLY IN SUPPORT OF MOTION TO QUASH SEARCH WARRANT

A.SECTION 1524(g) BY ITS PLAIN LANGUAGE PROVIDES AN
UNCONDITIONAL IMMUNITY
B. THE ROSATO CASE DID NOT IMPOSE AN UNWRITTEN EXCEPTION ONTO
SECTION 1524(g)
C. EVEN IF AN EXCEPTION DID APPLY, THE UNCHALLENGED EVIDENCE
INDICATES THAT THE EXCEPTION DOES NOT APPLY TO MORSE
D. THE FIRST AMENDMENT PROTECTS THE RIGHT TO OBSERVE AND
REPORT ON CRIMINAL ACTIVITY

II. ANY DOUBTS THE UC POLICE HAD ABOUT MORSE'S STATUS AS A JOURNALIST
AT THE CHANCELLOR'S HOUSE SHOULD HAVE BEEN RAISED IN THE SEARCH
WARRANT AFFIDAVIT


REPLY IN SUPPORT OF MOTION TO RETURN PROPERTY

I. THE COURT MUST EXERCISE ITS INHERENT AUTHORITY TO VINDICATE THE
POLICY UNDERLYING SECTION 1524(g) BY ORDERING THE RETURN OF ALL
COPIES OF MORSE'S UNPUBLISHED NEWS PHOTOGRAPHS

II. ALTERNATIVELY, THIS COURT MUST ORDER THE RETURN OF ALL COPIES
MADE OF MORSE'S JOURNALISTIC WORK PRODUCT PURSUANT TO PENAL
CODE SECTION 1538.5(n)

1. SECTION 1538.5 APPLIES TO "ANY TANGIBLE OR INTANGIBLE
THING"
2. SECTION 1538.5(n) PROVIDES AN INDEPENDENT VEHICLE FOR THE
RETURN OF ANY PROPERTY THAT IS PROTECTED BYTHE FREE SPEECH
AND/OR PRESS PROVISIONS OF THE UNITED STATES OR CALIFORNIA
CONSTITUTION

III. MORSE HAS A PROPRIETARY INTEREST IN CONTROLLING THE DISTRIBUTION
OF HIS JOURNALISTIC WORK PRODUCT

IV. UC'S ARGUMENTS REGARDING EXCLUSION ARE IRRELEVANT AND, EVEN IF
RELEVANT, ARE WITHOUT MERIT

A. THE UCPD DID NOT ACT IN GOOD FAITH IN OBTAINING THE ILLEGAL
SEARCH WARRANT
B. THE INEVITABLE DISCOVERY DOCTRINEIS INAPPLICABLE BECAUSE IF
SUBPOENAED, MORSE WILL INVOKE THE SHIELD LAW, MAKING THE
SUBPOENA UNENFORCEABLE
C. UNDER THE CALIFORNIA CONSTITUTION, THE PRESS RETAINS
REMEDIES REGARDING THEIR JOURNALISTIC WORK PRODUCT THAT
ARE UNAVAILABLE TO THE GENERAL PUBLIC

V. UC DOES NOT HAVE STANDING TO CHALLENGE THE MOTION FOR RETURN OF
PROPERTY 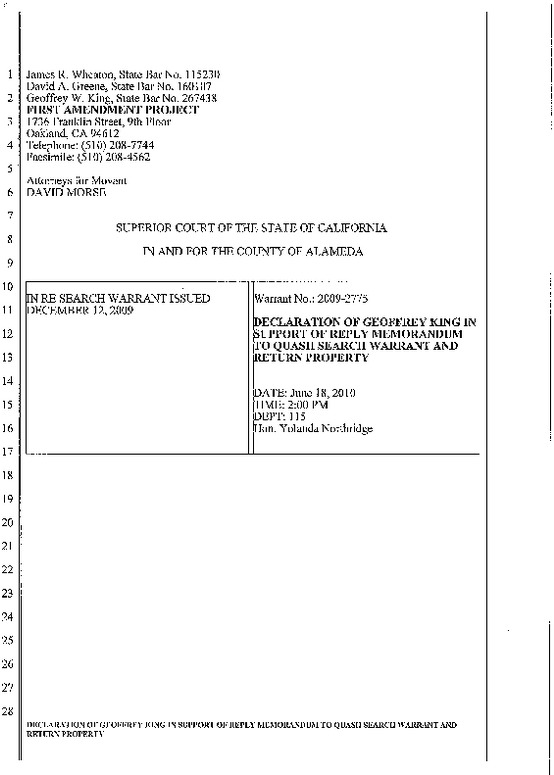 This filing includes the Complaint for Injunctive and Declatory Relief and for Damages of the Long Haul Infoshop and East Bay Prisoner Support for the raid of their offices by UCPD and the FBI in 2008. 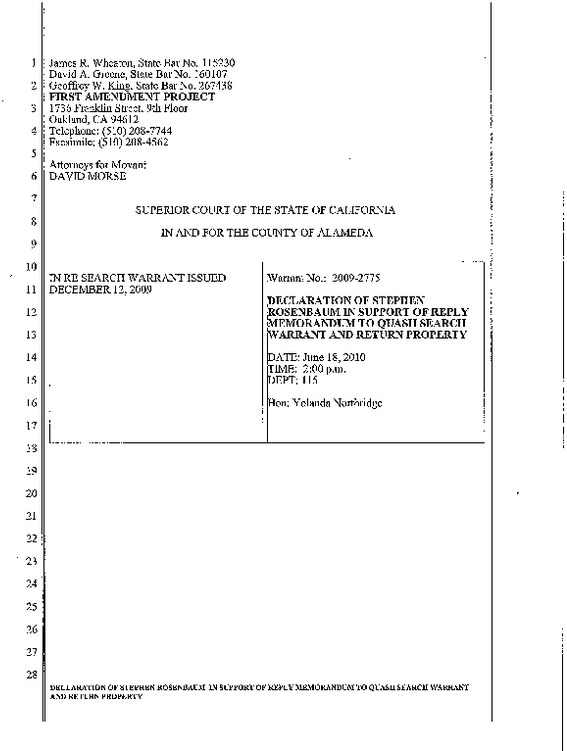 Note that the names of all arrestees except for Angela Miller are whited out, as per this copy of the report having come to light during student disciplinary hearings for Angela Miller. The narrative of the first person they interacted with at the scene is UCPD's version of my initial detainment. My own description of events can be found in "A Personal Account of Police Abuse of Power Against a Free Press" and the various related legal filings posted on Indybay. 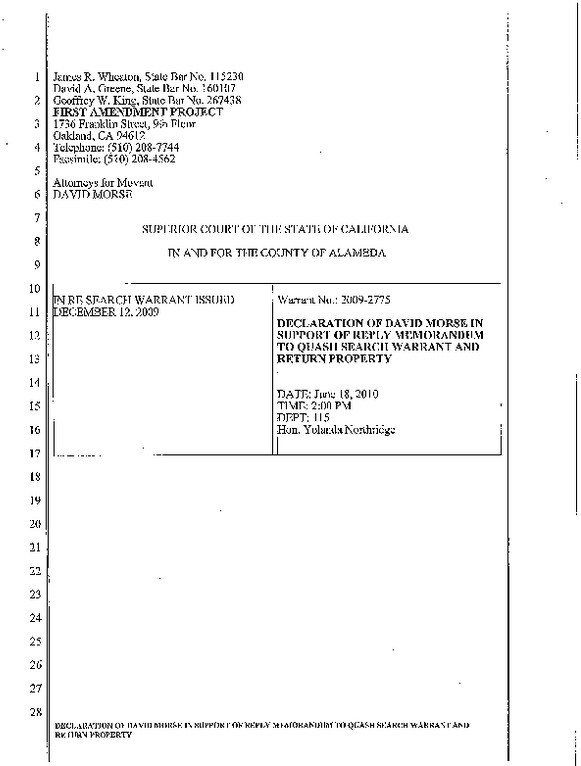 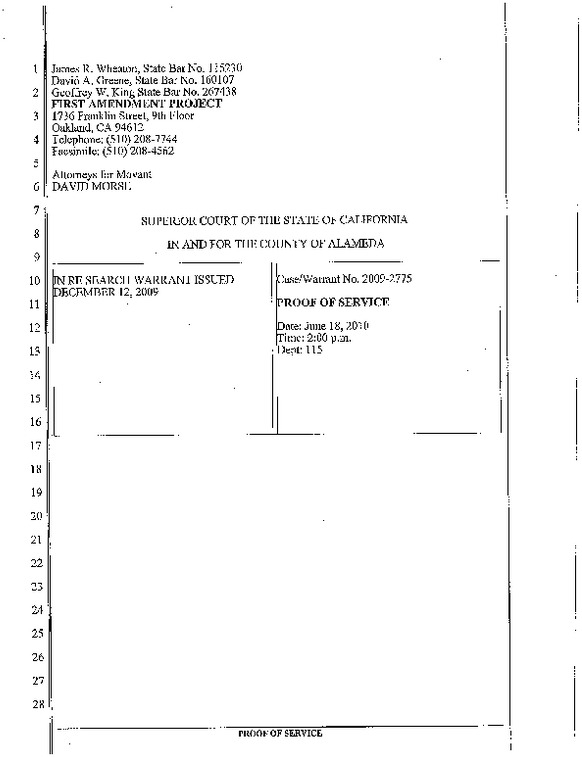 http://www.indybay.org/newsitems/2010/04/2...
Add Your Comments
Support Independent Media
We are 100% volunteer and depend on your participation to sustain our efforts!