Add an Event
Newswire
Calendar
Features
Home
Donate
From the Open-Publishing Calendar
From the Open-Publishing Newswire
Indybay Feature
Publish to Newswire
Add an Event
Related Categories: East Bay | Education & Student Activism | Police State & Prisons
UC8 Reporter: Update on Delays of Hearing for Motion to Quash UCPD Search Warrant
by dave id
Thursday Jun 17th, 2010 9:20 AM
A hearing on the motion to quash the search warrant the University of California police department secured for the photographs of mine they seized on the night of December 11th, 2009 has twice been delayed. First, because the District Attorney's office claimed not to be aware of my motion and, second, because UC claimed not to be prepared even though they had been originally served with notice of the motion seven weeks prior to their request for a continuance. The delays were disappointing and frustrating, compounding the injuries I seek to correct by quashing the warrant, but at the second scheduled hearing Judge Yolanda Northridge did issue a temporary injunction against any use of the photographs for investigative purposes and I was provided copies of most of my photographs, the first time I had seen them. Additionally, any ruling issued now will not be a default ruling due to opposition not showing up, but rather a more meaningful one based on the merits of the motion itself. With no more excuses for delay, the hearing is finally set for June 18th at 2pm.
Having filed the motion to quash the search warrant on April 16th, with copies served to both the Alameda County District Attorney's office and the University of California, a hearing originally was scheduled for May 11th at the Wiley W. Manuel Courthouse in Oakland with Judge Yolanda Northridge presiding.

Expecting the motion to be heard on May 11th, but unsure of what to expect after having received no contact or opposition filing from the District Attorney's office or UC, I showed up at the courthouse with my representatives from the First Amendment Project (FAP). After a few other quick cases were called, Judge Northridge called for my motion to be heard. There were no representatives for UC present. The District Attorney's representative said he was unaware of my motion and asked for a delay, so the hearing was rescheduled for June 4th.

On May 26th, a UC representative contacted FAP and requested a continuance of the hearing to a date further in the future, based on their prior assumption that the DA would oppose my motion to quash. On June 2nd, FAP filed on my behalf an opposition to UC's request for a delay [full filing attached below]. UC's attempt to push back the date would be heard on June 4th, as well as possibly my motion itself if the judge ruled against UC on the delay.

On June 4th in room adjacent to the actual courtroom, District Attorney representatives indicated to FAP that the DA had no interest in opposing my motion. It would be up to UC to oppose if they so chose. UC said they intended to oppose the motion to quash. In the courtroom itself, my case was the first called and UC, as expected, requested a delay for the hearing. UC offered a CD they had burned with copies of my photographs as if that would settle the matter, but Judge Northridge, who obviously had read my motion to quash and was aware of the issues at hand, accurately noted that there was more at stake than simply me receiving copies of my own photographs. FAP argued against their move to further delay the hearing, but the judge ruled that because UC had not been notified by FAP of the June 4th continuance that UC was entitled to more time, even though UC had not even shown up to the original hearing on May 11th. UC agreed to submit their opposition filing no later than June 8th and the hearing was rescheduled for June 18th. FAP argued that in the interim a temporary injunction against UC's use of my photos should be ordered. The judge did so order that UC was not to use my photographs for any investigative purposes until an actual hearing was held to resolve my motion to quash the search warrant.

After the hearing on June 4th, in compliance with the judge's temporary injunction, UCPD pulled down a "wanted" web page [image below] that they had posted in December which displayed cropped and zoomed versions of photos I had assumed quite possibly were mine (I was not certain because UC also seized two other cameras and a cell phone on December 11th, and I had never seen my own photographs). That evening I examined the CD that UC had provided with copies of my photographs and -- besides discovering that all of the photos on the "wanted" page had indeed been mine -- I found that most of the photos from my original disc that UC still possessed were not on the CD. FAP sent a letter to UC [attached below] requesting that they review the photos they had seized from me and that UC provide copies of them all. UC responded with a second CD they burned that additionally included dozens of photographs I had shot of SF State students demonstrating the day before the events of December 11th. (I had already downloaded the SF State photographs from my camera on December 10th, and I posted them to Indybay about a week after my time at Santa Rita). But the second disc still did not include all of the photographs I believe I had taken on December 11th in the vicinity of the Chancellor's house at UC Berkeley -- namely the new CD was missing the last photo I recalled in the series, that of the first UC police car to arrive at the scene. FAP sent another letter [also below] requesting UC review my original disc if need be and provide copies of all of my photographs. UC has provided nothing else to date.

UC filed their opposition to my motion to quash the warrant on June 8th and FAP filed a reply to their opposition on June 15th. Now, at 2pm this Friday, June 18th, in Department 115 at the Wiley W. Manuel Courthouse in Oakland, the motion shall finally be heard by Judge Northridge. It asserts that the search warrant obtained by UCPD on December 12th while I was still in jail was illegal as per Penal Code Section 1524(g), which references the California journalist's shield law.

http://www.indybay.org/newsitems/2010/04/2...
§Opposition to Motion for Continuance: Memorandum of Points and Authorities; Declarations
by dave id Thursday Jun 17th, 2010 9:20 AM 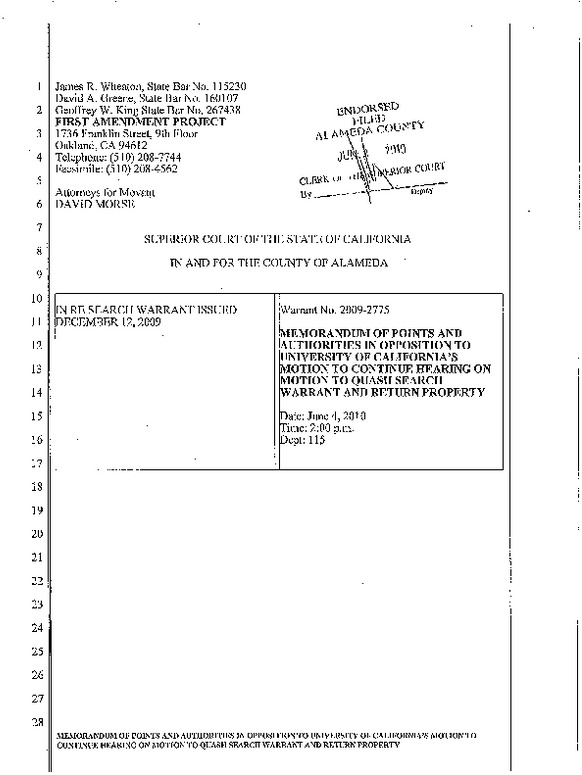 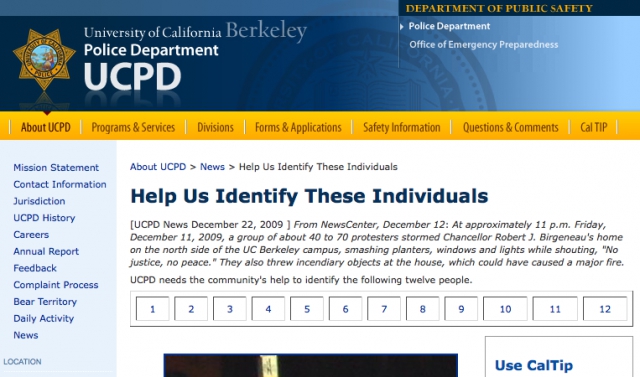 original image (763x450)
The page displayed 12 cropped and zoomed images of people present at the demonstration on December 11th, 2009. 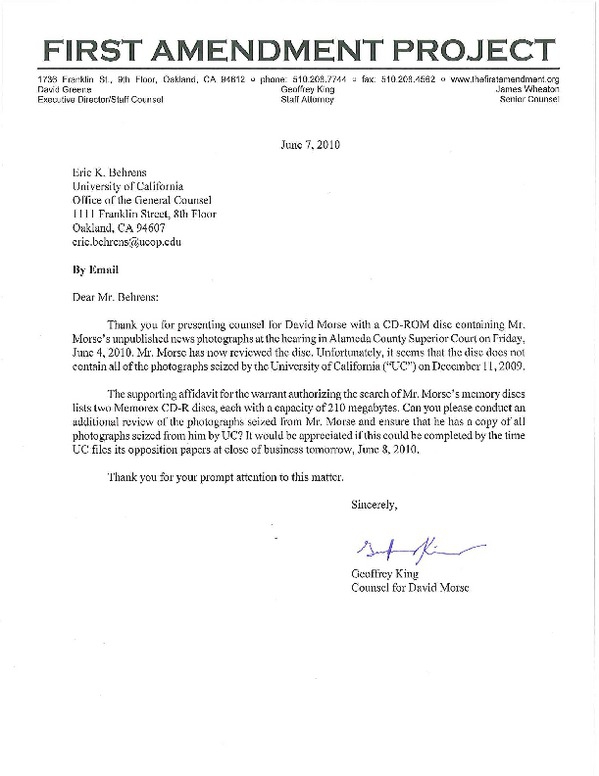 The first CD provided did not include a majority of the photographs contained on the original disc UC had seized, namely dozens from a demonstration at SF State that I had covered. 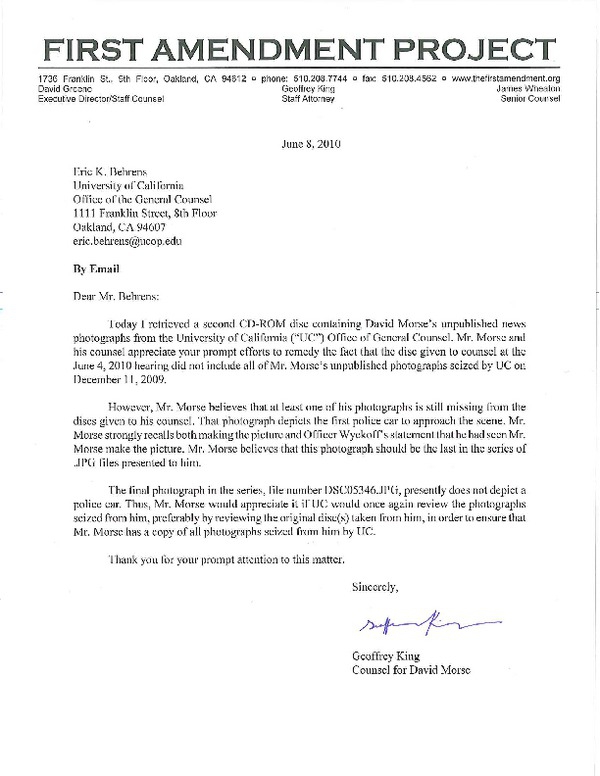 To date, UC has not provided the entire series of photographs I recall taking on December 11th, namely the final shot of the first approaching UC police car.

http://www.indybay.org/newsitems/2010/04/2...
§UC8 Reporter: UC Regents' Opposition to Motion to Quash Warrant, and Movant Reply
by dave id Thursday Jun 17th, 2010 8:46 PM
After the hearing on my motion to quash UCPD's search warrant was twice delayed, representatives of The Regents of the University of California submitted their written opposition to the motion on June 8th. On behalf of the Movant (that's me), the First Amendment Project filed a reply to UC's opposition on June 15th.

http://www.indybay.org/newsitems/2010/06/1...
Add Your Comments
Support Independent Media
We are 100% volunteer and depend on your participation to sustain our efforts!