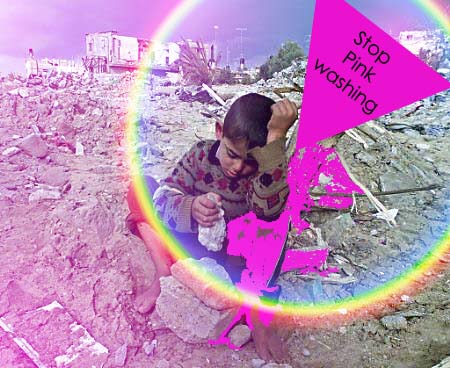 Import event into your personal calendar
Date:
Thursday, June 17, 2010
Time:
6:00 PM - 9:00 PM
Event Type:
Protest
Organizer/Author:
QUIT!
Location Details:
Castro Theater, Castro and 17th, San Francisco
For the first time since 2007, the Israeli Consulate-General is a sponsor of the San Francisco LGBT Film Festival, which bills itself as the largest queer cultural event in the world. A coalition of Bay Area queers say NO to Pinkwashing Israeli Crimes!

Lesbian/gay/bi/trans activists in solidarity with Palestinian human rights have called for a picket of the opening night festivities at the San Francisco International LGBT Film Festival. For the first time since 2007, the Israeli Consulate-General is listed among the festival sponsors.

“Palestinian civil society, including all the queer Palestinian organizations, have asked us to respect the cultural boycott against Israel by not partnering with the Israeli government,” said Kate Raphael, a member of Queers Undermining Israeli Terrorism (QUIT!). “There is no justification for queer institutions to ignore this request for solidarity.”

In April, the two Palestinian LGBT organizations, Aswat-Palestinian Gay Women and al Qaws (the Rainbow) for Sexual & Gender Diversity in Palestinian society issued a statement (http://www.alqaws.org/q/content/say-no-out-israel) asking international queers to oppose the Israeli government’s new tactic of “pinkwashing.” Pinkwashing means the Israeli government’s use of its liberal policies on gay rights to deflect criticism of its denial of human rights to Palestinians.

“I was shocked to learn that Frameline Film Festival accepted the Israeli government’s sponsorship,” said Bassam Kassab, an Arab-American screenwriter and movie producer. “The progressive film community and the LGBT community should reject tainted money from any government that picks and chooses which human rights it respects. The right to food and water for Palestinian children and the right to life for human rights activists on flotilla ships cannot be trumped by the Israeli government’s PR campaign to portray few blocks in Tel Aviv as the gay haven of the Middle-East.”

Kassab is coproducer of the film, “All My Life,” which played at the 2008 Film Festival.
QUIT!, SouthWest Asian and North African Bay Area Queers (SWANABAQ) and the Arab Resource and Organizing Center (AROC) are calling for a boycott and picket of the festival’s opening night at the Castro Theater.

“In the face of the call from Palestinian civil society for a boycott, partnering with the Israeli government is crossing a global picket line,” said Raphael, who is also a Community Grand Marshal of the LGBT Freedom Day Parade. “We intend to make that picket line visible and ask queers who respect human rights not to cross it. We hope that this will convince festival organizers not to accept Israeli blood money and support in the future.”

Activists expect that Israel’s recent attack on a flotilla of international aid ships, which killed at least 9 peace activists including a U.S. citizen, will increase support in the LGBT community for their demand that Frameline sever its ties to the Israeli Consulate. The picket will feature signs demanding “Don’t Pinkwash Israel’s Crimes,” and will include a brass band.
END_OF_DOCUMENT_TOKEN_TO_BE_REPLACED
Added to the calendar on Tue, Jun 15, 2010 2:43PM
Add Your Comments
Latest Comments
Listed below are the latest comments about this post.
These comments are submitted anonymously by website visitors.
TITLE
AUTHOR
DATE
Please come out and support this action!
Adam
Support Independent Media
We are 100% volunteer and depend on your participation to sustain our efforts!